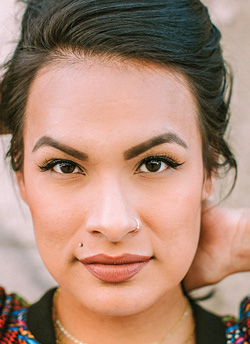 Tara is a featured artist at the upcoming Regina Folk Festival. In 2016, she released the five-track EP Diary of a Mad Red Woman. She also has a jewellery line called Beads, Rhymes & Life. Here are six songs she considers favourites. /Gregory Beatty

“Shoop” was the first rap song I learned every word to. I used to round up all my friends and organize lip synching shows for anyone who was willing to sit through [them]. I didn’t realize then how significant SNP would become to me — at the time, I was just excited to have brown/black women to look up to.

I went through an angst-grunge phase in my teen years and taught myself to play guitar. After learning to play songs by Hole I mustered up the courage to get on stage and perform for the first time.

When I first fell in love hard with the man I’m proud to call mine now, this was the song I used to listen to over and over ’cos it reminded me of him. I used to make him mix CDs and would always slide Atmosphere songs into them. We’re both still die-hard fans ’cos their music was definitely a catalyst for our love connection.

This song was incredibly meaningful to me because it was the first time I heard a woman openly describe the raw emotion she felt while going through an abortion. The topic is so taboo, especially in the male-dominated hip-hop scene, so to hear someone as gifted and respected as Jean share her experience made me realize I too was capable of telling stories that were very real.

Erykah is a huge musical influence. It was actually very hard to pick just one song by her that has resonated with me.

Princess Nokia is unapologetic AF and the type of woman I feel I could become best friends with. I love her style and how real she is, and if you listen to the hook of this track you’ll understand what I mean.