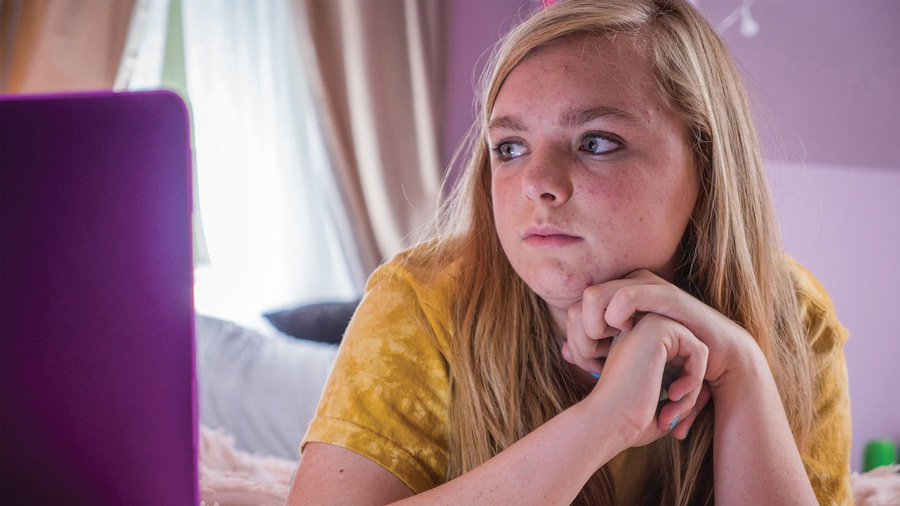 Movies about young teens are either syrupy Disney Channel-type comedies or gritty dramas bordering on exploitative (remember Larry Clark? *shivers*). The lack of middle ground deprived a generation from seeing themselves on the big screen. Then again, they have plenty of cell phones to make up for it.

Eighth Grade fills that space with chutzpah. Written and directed by former YouTube personality Bo Burnham, the film sees vlogging, Instagram and active shooter drills as the natural landscape of 13-year-olds. That’s big but it’s the least of the feature’s accomplishments. This movie is a powerful and honest character study revolving around Kayla (Elsie Fisher, Agnes in the Despicable Me movies),  the quiet type, isolated at school, never mind her YouTube advice channel where she talks big to about five followers.

An invitation to the Most Popular Girl In Eighth Grade’s pool party forces Kayla out of her comfort zone to face body image issues and social anxiety head on. The presence of the boy she has a crush on doesn’t help but instead of recoiling, Kayla adopts the “fake it ‘til you make it” approach. Life ensues.

Burnham keeps things relatable — Eighth Grade skips big tragedies and grand gestures while preserving a darker undercurrent.  The drama is proportional to how important these experiences are to Kayla and the movie refuses to minimize them or mock her as she navigates the treacherous waters of school. Eighth Grade does a terrific job showing character growth without cheating via epiphanies or time jumps.

None of this would work without an incredible performance by Elsie Fisher, whose naturalism amplifies the story’s impact. Her work may be better appreciated by adults than kids her age, who may miss the nuances in her character’s life as a wallflower. Then again, maybe they won’t.

For a first-time feature director Bo Burnham has great instincts. Eighth Grade isn’t afraid to make its lead unlikeable (Kayla is bratty to her loving single dad) while keeping an eye on what makes her tick. Burnham not only gets the most of Fisher, he rescues Josh Hamilton (With Honors) from oblivion as Kayla’s quietly despairing father.

There are no actual villains in Eighth Grade. The so-called “mean girls” are more self-involved than nasty and the object of Kayla’s affection is just some clueless kid with nice eyes. The film’s pivotal scene places the teen in a situation she’s not prepared to deal with and the discomfort is off the charts (think Hereditary, without the supernatural).

For all its achievements, Eighth Grade could’ve used a sturdier plot. Sure, the film is character-driven and the milestones immediately recognizable but a mere framing device (time capsules) to bookend the movie doesn’t quite cut it. Regardless, as films that capture warts and all teenage life go, Eighth Grade is one with the zeitgeist.