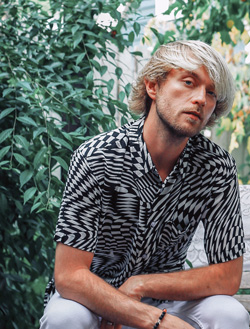 Greg is a Saskatoon singer/songwriter/pianist and one-half of Too Soon Monsoon. The alt-pop band released two EPs in 2017 and this fall, in advance of a western Canadian tour, they’ll release two singles (“Ocean” and “Mountains of Blue”). Too Soon Monsoon plays O’Hanlon’s Pub in Regina on Oct. 5, and will also showcase at Breakout West in Kelowna from Oct. 10–14. /Gregory Beatty

I was so proud of myself at nine years-old for my ability to “spit” this song’s rap verse. Then I realized I didn’t know what I was saying, so I sat down with a dictionary, my family’s encyclopedia set, played the album on repeat, and educated myself as best I could.

I was introduced to Fiona when producer Jon Brion’s unreleased version of this album began to leak in 2004/05. Her wordplay, allusions, massive vocabulary (not unlike Lauryn Hill) and vibrato were striking and taught me that I should be proud of my individuality — and that playing the piano and throwing all of your emotion into a song is actually pretty cool.

Stevie’s rawness (both lyrically and vocally) is so honest and inspiring. I never tire of this song.

If I need a pick-me-up, this song gets cranked and I dance around the house for two solid minutes.

This song wastes no time kicking into gear. The lyrics are smart and the music urgent. The bright xylophone peppered throughout the verses is a nice touch. I especially appreciate the lyric: “when the power’s out in the heart of man, take it from your heart, put it in your hand”.