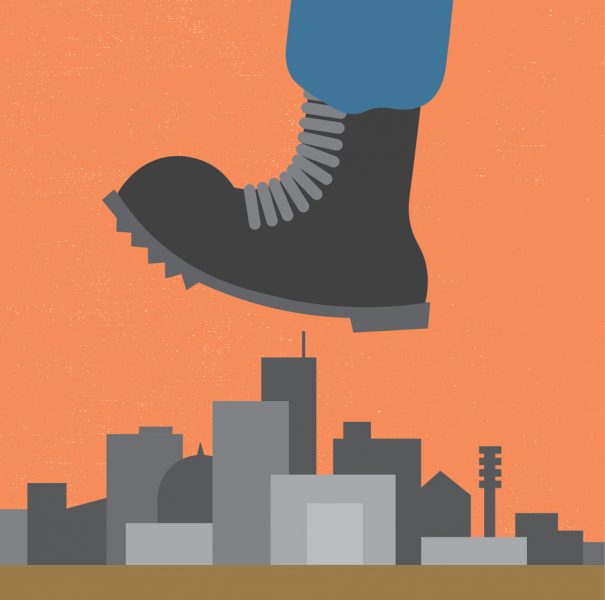 While the constitutional tussle between Doug Ford’s Ontario government and Toronto city council is grabbing a lot of headlines, it’s far from the only example of how out of sync our governance structure is with modern times.

With all the trade barriers between provinces, for instance, it’s been noted that it’s easier for countries in the European Union to trade with each other than it is for provinces in Canada.

The role of cities in Confederation is another example of an archaic structure that’s hindering our ability to thrive in a globalized world. As Ford and his P.C. cronies so arrogantly demonstrated with their “edict” slicing Toronto’s council from 47 to 25 seats mid-election, when it comes to constitutional authority, provinces hold all the cards.

That comes courtesy §92 of the British North America Act. Along with §91, that’s where delegates at two 1864 conferences in Charlottetown and Quebec City divvied up the powers of nationhood between federal and provincial jurisdictions. Cities fell to provinces.

Canada, of course, was a much different country then. Resource extraction and agriculture were its principle economic drivers, and three-quarters of its 3.4 million citizens in Ontario, Quebec, New Brunswick and Nova Scotia were rural. By 1921, with the federation expanded to nine provinces and two territories, the split was 50/50 rural/urban. Now, 80 per cent of Canadians are urban.

That’s not the only change, says University of Saskatchewan political scientist Joe Garcea. In Canada’s early days, government had limited responsibilities. Ottawa, for instance, looked after defence, the post office, national transportation and not much else.

“But with the rise of the welfare state, all orders of government started to become more involved in providing services,” says Garcea.

Tools such as income tax, GST and the PST, have been developed to help Ottawa and the provinces fund this expanded activity. But because cities are “creatures” of the provinces — as legal scholars describe the relationship — their capacity to adapt to changing circumstances has been constrained.

“The role of cities has changed dramatically since the BNA Act was written,” says Saskatoon mayor Charlie Clark. “In so many ways we’re now on the front lines of addressing so many issues.”

To begin with, there’s the challenge of providing the infrastructure large groups of people need to live and work productively in our modern, hi-tech world — roads, sewer, water, transit, waste disposal, police and fire protection, etc. Recreational and cultural amenities are important too, because they help attract skilled workers and innovative businesses.

As urbanites well know, social challenges such as poverty, homelessness, substance abuse, mental health and crime are part of the equation, too.

And new challenges — such as coping with the effects of climate change and enhancing environmental sustainability — continue to emerge.

“These are all things that occur in cities,” says Clark. “But we have the least power, the least authority and the least ability to raise revenues of any level of government to deal with them.”

“They have own-source revenue, which are [property] taxes, user fees and sometimes investments,” Garcea says. “They also have transfers from the federal and provincial government.

“Municipalities argue they’ve reached a critical point in how much they can get from own-source revenue,” adds Garcea. “They would like more either in transfers or through access to the means to raise money such as revenue sharing with the PST and fuel tax.”

During the SaskaBoom (remember that thing?), Brad Wall’s Saskatchewan Party government took tentative steps in that direction but it backtracked pretty quickly from a commitment to share one per cent of the then-five per cent PST.

Later, they threw major wrenches into city budget planning with a late provincial budget in 2016 and a surprise cut to grants in lieu in 2017 that cost Regina and Saskatoon over $10 million each.

“They decided to just arbitrarily take 50 per cent of the photo radar revenue from people speeding on city streets,” says Clark. “In Saskatoon, the revenue is 100 per cent targeted to growing traffic safety issues. Instead, the province will put it in their general revenue fund and also distribute it to other parts of the province.”

Cannabis is another area of concern.

“The federal government has agreed to a 75/25 split on the excise tax revenue with the provinces,” says Clark. “Now it’s up to provinces to decide whether they’re going to share that with municipalities, who will bear many of the policing and other administrative costs.”

Ideally, cities would collaborate with federal and provincial governments to develop policies and implement programs to address urban concerns.

But politically, says Garcea, that can be a tough sell.

“Cities argue they are in the best position to do strategic planning to effectively use the resources they have,” says Garcea. “But under that scenario the federal and provincial government collect the taxes, then distribute the revenue to municipalities.

“Generally, people aren’t fond of taxation, so Ottawa and the provinces are afraid they’re going to be the tax collector and someone else gets to be the candy man,” Garcea says.

“If they’re always the bad guys, and aren’t seen to be giving money, they’ll experience a legitimacy crisis in people’s eyes,” he says.

Some progress has been made on select files, says Clark, pointing to an At Home/Chez Soi pilot project on homelessness and a follow-up National Housing Strategy.

But greater collaboration is needed.

“I see real value in having what the Big City Mayors Caucus calls a four-corner table,” says Clark. “On big issues you have federal, provincial, municipal and First Nations governments discussing how [policies] are going to roll out on the ground, what needs to be considered if legislation is being created, and how can we make sure it’s most effective.”

That’s what needs to happen. It remains to be seen if it will.

Who let Doug Ford out?

Results have been even more ridiculous than predicted, with at least one legitimate Toronto mayoral candidate threatening municipal secession in the face of Ford’s well-publicized attack on the city’s election. Premier Ford, for anyone who missed it, reduced the number of Toronto wards from 47 to 25 IN THE MIDDLE OF A CITY ELECTION — an undemocratic move so extreme it was condemned by Amnesty International.

If there’s a takeaway from the Toronto schmozzle, says Joe Garcea, it’s that 151 years after the BNA Act was implemented, municipalities remain creatures of the province.

“There’s an element of ‘God giveth and God taketh away’,” he says. “Constitutionally, provinces have a lot of control over municipalities. Politically, though, I would say cities have started to acquire quasi-constitutional status.

“Notwithstanding what happened in Toronto, it’s a lot harder politically for a provincial government to ride roughshod over a city,” Garcea says. “It’s doable, but politically it’s difficult, and I think what we’re sensing is that administrative law should apply where there should be due process.”

While a bitter pill for Toronto (and other Canadian cities) to swallow, Garcea thinks the controversy will energize them.

“What it comes down to is citizens are looking to governments to be efficient, effective and focussed on problem solving and addressing issues they are facing,” says Charlie Clark. “What’s going on in Ontario is a complete distraction from being able to focus on that.”

Rural Saskatchewan needs to pull itself together

The role of cities isn’t the only thing that needs a rethink.

Back in the day when Saskatchewan was mostly rural, and transportation and communication options were limited, it made sense to have strong local government.

But again, times have changed.

That wasn’t the point, though, says Garcea.

“People think it was about cost saving, but no,” he says. “It was about capacity building and coherent planning and development.”

Eventually, the government backed off and encouraged RMs to voluntarily amalgamate. In 18 years, guess how many have? Go on, take a shot.

And we’re to the point where, according to recent census figures, 185 RMs have populations under 500.

Glen McPherson (pop. 72) has a reeve and four councillors. That works out to one official for every 16 people. Compare that to Doug Ford’s revamped Toronto council, where each councillor represents 109,000 people.

Recently, several governance scandals have emerged such as the Clayton bridge collapse where the RM couldn’t afford a geo-tech survey of the riverbed and pilings gave way on opening day. Fortunately, no one was hurt by what the reeve attributed to an act of God (his exact words were: “It wasn’t structurally faulty. The fault is in what God did under the river.”).

The RM of McKillop is also under investigation after ratepayers saw their tax bill more than double to cover an unexpected shortfall.

Even large RMs aren’t immune from governance challenges, says Garcea. During the SaskaBoom, both Sherwood near Regina and Corman Park near Saskatoon experienced development pressures — to the point that Jim Reiter, then Minister of Government Relations, had to intervene.

“It was interesting where Jim Reiter, of all people, ended up saying they needed to get their act together,” says Garcea. “[When the report was released in 2000], Jim was president of the Rural Municipal Administrators’ Association, and there was no way in hell he wanted any amalgamation. And there he was, threatening the RMs, because exactly what we [predicted] was happening — where the current structure was an obstacle not only in bad times, but in good times.” /Gregory Beatty