After five years of woe will the Blades make the playoffs? 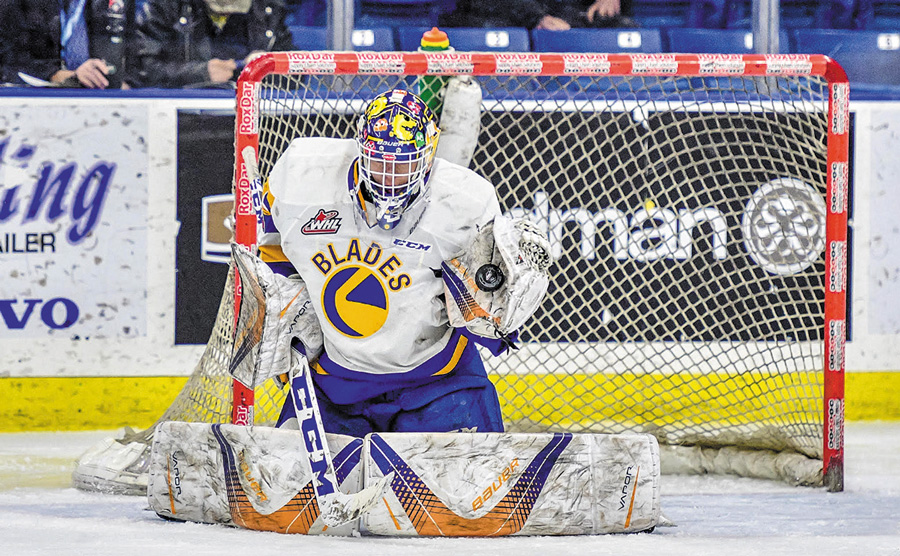 After falling just short in 2016–17, the Saskatoon Blades were forecast (by us anyway) to finally make the playoffs in 2017–18. Instead, they missed again, extending their drought to five years.

Will it reach six in 2018-19? As we showed last year, we suck at hockey predictions. But with help from Blades play-by-play announcer Les Lazaruk, we can give you the scoop on the season ahead.

First off, there’s a big change at coach, where the Blades fired Dean Brockman and replaced him with Mitch Love. At 34, Love’s relatively young, but his c.v. includes eight years as an assistant with Everett Silvertips.

“Mitch has his own way of doing things, with discipline and hard work, and he expects his players to adhere to that,” says Lazaruk. “Anybody who thinks they can take shortcuts with him and associate coach Ryan Marsh will find out in a hurry that they won’t get playing time.”

Following his dismissal, Brockman signed as coach of the defending WHL champ Swift Current Broncos. So he landed on his feet. And when the move was made, Lazaruk says, some fans did question it. “‘Well, you traded away your best players, so how could you possibly have made the playoffs?’ they asked.”

Cam Hebig (F), Libor Hájek (D) and Ryan Kubic (G) were three top players dealt by the Blades at the trade deadline. But it wasn’t a fire sale, says Lazaruk. Instead, the Blades simply realized they were outmatched in the ultra-competitive WHL East.

“Moose Jaw ended up with the best record in the regular season,” says Lazaruk. “Swift Current was right behind, and the Pats were hosting the Memorial Cup, so they had to be better. The Blades felt that maybe they could sell off some of their older, more valuable guys.

“They still felt they could make the playoffs,” he adds. “That might have been a pipe dream on their part, but they felt they could, so not making it was a disappointment.”

The Blades received a mix of prospects and draft picks in the trades. They went 6–1 in the pre-season, then swept Swift Current home-and-home to open the season.

“I would call the Blades a dark horse contender,” he says. “I don’t think they’re quite ready to be a championship team.”

Age is a major reason, says Lazaruk. “Their best players, I would say, are their youngest players. They are 17 and 18 year-olds in a league where the best teams have top players who are 19 and 20. That’s not a shot at the Blades 19 and 20 year-olds, but they’re not quite up to the calibre of other teams.”

Still, the Blades do boast some impressive talent led by Kirby Dach (F), who as a 16-year-old rookie last year had 46 points in 52 games. “He’s considered by many to be a top-10 pick in next year’s NHL draft,” says Lazaruk, who compares Dach to former NHL star Joe Nieuwendyk.

Dach boosted his profile with a strong performance at the recent Hlinka Gretzky Cup in Alberta, says Lazaruk.

“He was on the top line for Team Canada with Peyton Krebs who is playing for Kootenay this year, and Alexis Lafrenière who is probably going to be the first overall pick in the 2020 NHL draft,” Lazaruk says. “So he played with some really good players and was able to keep up.”

Another key contributor is expected to be Nolan Maier (G), who as a 16-year-old rookie won 23 games last year.

Eric Florchuk (F), who the Blades acquired from Victoria last season for two first round draft picks, and Chase Wouters (F), who Lazaruk expects will be named Blades captain, are other rising stars.

Heading into the season, Max Gerlach (F), who had 35 goals and 35 assists with Medicine Hat and Saskatoon last season, Dawson Davidson (a D-man acquired from Regina) and Bradly Goethals (F), who played a season under Love in Everett before joining the Blades last year, are the three 20-year-olds.

“For the first time ever, the Blades drafted an import from Norway,” he says. “Kristian Roykas Marthinsen is a 19-year-old winger who was drafted by Washington in 2017, and the hope is being a little older and better able to stand the transition from European hockey to North America, he’ll be a big-time contributor.

The other import is 17-year-old Swedish defenceman Emil Malysjev.

“They all went for it last year, and now have lost a lot of their older, more talented players,” he says. “So the feeling is they’ll take a step back, and it won’t be the Group of Death, to borrow the World Cup of Soccer phrase.”

Instead, says Lazaruk, Brandon and P.A. are the teams to beat. Both made the playoffs as wild cards last year. The Raiders took Moose Jaw to seven games in the first round, while the Wheat Kings upset Medicine Hat in round one before falling to Lethbridge Hurricanes in five games in round two.

If the Blades play up to their potential, Lazaruk thinks they could enjoy a similar type of season as those teams last year — with a third place finish possible.

“It’s unfortunate that the last two years the Blades sat in a playoff spot with about two weeks left and weren’t able to close out,” says Lazaruk. “So if they do get in this year, they’ll gain some valuable experience, then we’ll see what happens in 2019–20.

“But who knows? Maybe they make the playoffs and get on a roll, and are able to win a series or two,” he says. “But for now, I think just making the playoffs is the biggest goal.”