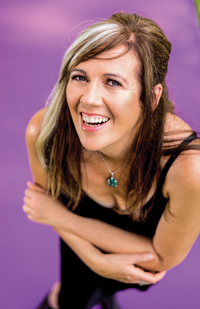 Part of the well-known Campagne musical family from Willowbunch, Annette was a founding member of Hart Rouge and has worked as a solo musician for over two decades. On Tuesday, Oct. 18 she’ll play a release show at Artesian for her latest album, I Am. Here are five songs she considers favourites. /Gregory Beatty

I got such a rush from the chorus the first time I heard this song. So powerful! You know when a song gives you shivers? Well, this one made the hairs on my arms stand up. The lyrics’ imagery is very striking, very inspiring. This song makes me believe I can achieve anything I want to.

I heard this song for the first time with a friend who played it on his mega sound system full blast! I remember saying to myself that music really IS what I want to do for a living! When Youssou N’Dour’s voice came in at the end, I had tears in my eyes. The scope of the production is jaw dropping!

It’s not always easy to convey what you want to say in so small a space as song lyrics, but this song does it. I mean, how can these lyrics get any better? “My hands, they’re strong, but my knees were far too weak to stand in your arms without falling to your feet.” Sublime.

I had the pleasure of working with Joey when he played electric guitar on several tracks on one of my albums. This was before everything exploded for him and the Bros. Landreth. He is one of the most talented artists I know, and a super great guy too! This song is a masterpiece.

This is one of my all-time favourite feel good songs! I don’t much see the point of bringing people down when I write, and for me Sheryl Crow has a way of writing a great feel good tune that’s cool at the same time!