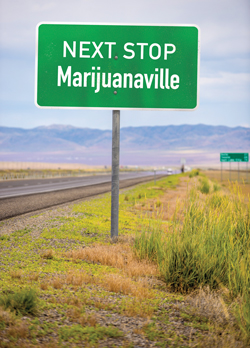 It’s been a long, hazy road to legalization. Here’s what you need to know now that we’ve arrived

Cannabis was outlawed in the 1920s as part of a broader prohibition against drugs such as opium and cocaine. To drive home the alleged “threat” weed posed to society, major “reefer madness” style propaganda campaigns were mounted.

They were over the top, packed with misinformation and just dumb as hell. And, well, they worked.

Canada is a different country today. We’re on the cusp of legalizing cannabis for recreational use. So we’re over pot panic, right?

Unfortunately evidence of that mindset remains.

There’s still some public fear that come Oct. 17 we’re all going to be overwhelmed by a tsunami of cannabis as a buttoned-up nation smokes up, flips out and runs amok.

“The data shows a large number of Canadians, about 25 per cent, are already consuming cannabis either legally [as licensed medical users] or through the black market,” says Thompson. “So while there’s a lot of nervousness and anxiety, it’s more about helping people understand the new rules and acting in accordance with them.”

Discredited myths — such as cannabis being a “gateway” to other drugs — have factored into the debate. One Regina city councillor, Bob Hawkins, used that term to stall the bylaw reforms pot shops need.

Then there’s the fact governments leaned heavily on existing alcohol and tobacco policy models, despite the fact cannabis has a very different impact on the body and behaviour.

For example: because there’s a strong withdrawal effect, tobacco and alcohol are both physically addictive. They also contain toxic compounds.

Cannabis, on the other hand, has many documented benefits.

“The main goal of law enforcement and the health system [historically] was to mitigate damage, whereas cannabis is known to be helpful for a broad range of conditions,” says Thompson.

That’s why since 2001 Canadians can get permission from Health Canada to use cannabis for medical purposes under a doctor’s care. And while formal research has been hindered by cannabis’ illegal status, it’s now understood that humans, along with other mammals, have an endocannabinoid system that reacts positively to different compounds in cannabis.

Then there’s the issue of the 21st century’s more potent pot.

“Other groups we have to be mindful of include returning cannabis consumers, people who are older now, but who used cannabis in the 1960s and ’70s when the THC levels were much lower, and  young users who might not have consumed before, so the effects might be quite strong for them,” says Thompson.

Edibles, which won’t become legal until October 2019, are another area of concern.

Thinking the edible isn’t working, some consumers may be tempted to take a second one. In Colorado, which legalized in 2012, that led to a spike in hospital visits because people were “greening out” from ingesting too much THC too quickly.

“To avoid emergency room visits on our burdened healthcare system we need to educate consumers in a way that isn’t fear-based, because that’s not credible,” says Thompson. “Instead, we need evidence-informed education.”

“We definitely have to be careful because we have a long-standing record for the most deaths by drunk driving in Canada,” says Thompson. “Road safety is a significant issue here.”

Canada got a lot of attention for legalizing cannabis. But the idea that we’re “blazing” a new trail (haha) isn’t exactly accurate.

In the U.S., nine states with a combined population of over 70 million have now legalized recreational cannabis. This despite pot being illegal at the federal level.

Uruguay beat us, too. Uruguay!

It’s still a big step, especially for a country with Canada’s international standing. That’s why Ottawa and the provinces have favoured a strong regulatory approach — it should help ease public concerns both at home and internationally, where Canada is party to several drug treaties.

At the federal level, that strong approach included putting former Toronto police chief Bill Blair in charge of the file. A lot of legalization advocates howled at that one.

Was there method behind the Liberal government’s seeming madness of putting the former chief of a zero-tolerance force in charge of legalization?

“This is a really significant initiative, so taking that approach was strategic,” says Thompson. “And I thought Blair did a solid job.

“I know it’s frustrating for people in the cannabis community who think it’s been moving slow, but he was a credible person to speak to the concerns of police, parents, schools and communities.”

The point has also been made by cannabis advocates that it’s better to start with a strict regime and loosen it later — as opposed to starting with a loose regime, and then trying to tighten it later.

One area that will likely need some loosening, says Thompson, are the rules around consumption. As things stand now [see sidebar], anyone who isn’t a homeowner is effectively barred from smoking cannabis.

One might suggest that’s discrimination on the basis of income.

“Our laws work for people with money, so I’m concerned about vulnerable and marginalized people who are probably subject to the private sector rental market or public housing — both of which are imposing all kinds of restrictions on smoking and growing,” says Thompson.

Colorado had a similar provision, says Thompson. What ended up happening is that police spent more time ticketing people for public smoking than they did laying possession charges before legalization.

Without any provision for cannabis lounges, we’re set up for a similar policy failure here. With growing gun crime and an opioid crisis, is that truly the best use of police resources?

Quite apart from targeted police action against marginalized communities, there’s likely to be a lingering stigma about cannabis use that could manifest itself in many different areas: employment, community service and personal/professional relationships. Nobody should lose a job or be banned from volunteering for using a legal substance, but those are possible consequences for people coming out of the cannabis closet.

The most concrete examples of that stigma are the criminal records many Canadians have been saddled with over the decades for minor cannabis offenses. Already, both the provincial and federal NDP have called on Ottawa to create an expedited pardon process. And Thompson says litigation is likely to challenge discriminatory measures in other areas.

Other changes to the regime, Thompson expects, will be driven by commercial considerations as other countries follow Canada’s lead and legalize cannabis themselves.

“The tipping point has happened,” she says. “Canada’s cannabis industry has been appraised at $60 billion and the European market at $220 billion. The global demand for CBD oil, which doesn’t have THC, is huge in places like China and India.

“This is where Canada has a massive advantage because we’ve legalized ahead of other countries,” says Thompson.

To take advantage of those opportunities, Canada needs a balance between public health and safety concerns, and innovative production and marketing strategies.

“Legalization is a complicated policy issue, and its success will depend on encouraging people to buy legal cannabis and move away from the black market,” says Thompson. “Right now, the black market is convenient and price competitive.”

Health Canada recently loosened restrictions around cultivation to permit micro-operations that don’t require multimillion dollar investments  to submit a licensed producer application. That could give rise to a craft market that, in addition to creating interesting specialty products, could allow growers currently in the black market to enter the legal industry.

“This is the largest economic opportunity, and the largest medical disruption, we’ll see in our lifetime, so it’s a tremendous opportunity for political leaders to embrace this industry,” says Thompson. “For Saskatchewan, hemp could be a big industry too.”

Right now, she thinks, Saskatchewan is lagging behind other jurisdictions. “Calgary, for instance, has a cannabis research park for cultivators and extractors. So it’s seen as a big business and employment opportunity to create value added products.”

The best way to achieve both public safety and economic goals, concludes Thompson, is education.

“What we need is broad-based, evidence-informed education that gives us the pros and cons of cannabis use,” says Thompson.

“We can help our citizens and decision-makers have a compassionate, informed approach rather than displace vulnerable people — which is very easy to do.”

Rules Of The Roll

“Prohibition 2.0” is how critics describe the federal Liberal government’s cannabis legalization. And it’s true: there are a lot of restrictions. That’s not all on Ottawa, though — provinces and municipalities got to channel their inner Volstead Act. Especially in the area of retail sales and consumption. Still, Canada is definitely breaking major ground, and as people get used to legalization it’s likely the regulatory regime will mellow out. But for now, here’s a primer on Saskatchewan’s legal framework. In typical Canadian fashion, rules vary province to province —  So keep that in mind when you’re outside Saskatchewan. /Gregory Beatty

PURCHASE OPTIONS Saskatchewan has licensed 51 privately-owned stores. Saskatoon has seven outlets. You can also purchase online. ID checks will be mandatory and you’re limited to 30 grams (or about an ounce) of fresh or dried cannabis. Cannabis oil, and plants and seeds for cultivation, can also be bought, but edibles, creams and other concentrates remain illegal until Oct. 17, 2019. Don’t expect a lot of innovative promotion and marketing by producers and retailers either, as like tobacco, the rules on what they can do are strict.

SPARKING UP You can only smoke on private property. That includes residences, yards and campsites. Cannabis lounges are verboten, as is toking in public places such as city parks, outdoor concerts and everywhere else. If you’re a tenant, or even a unit-holder in a condo with a no smoking policy, you may be out of luck. Although if you’re medically licensed to use cannabis you might be exempt.

HOME GROW You can grow up to four plants per household, although tenants may be subject to rental restrictions. Adults can share cannabis with other adults but not sell it. And sharing cannabis with minors carries significant criminal penalties.

BUSTED Police have some discretion with minor offences to issue tickets, such as for adults having more than 30 grams but less than 50 g of cannabis. But for major offences, such as selling and purchasing on the black market, penalties can be severe, including jail terms. Youth found in possession of more than five grams of cannabis will be prosecuted under the Youth Criminal Justice Act.

DRIVING Both the federal government and province have jurisdiction. Saskatchewan has adopted a zero tolerance policy, while Ottawa has established the summary offence of “drugged driving” for drivers with between two and five nanograms of THC (per millilitre of blood) and the criminal offence of impaired driving for over five ng of THC. Drivers are also deemed impaired if they have more than 2.5 ng/mL of THC and 50 milligrams of alcohol (per 100 millilitres of blood). Devices that measure THC in a person’s blood are being developed, but the legal definition of impairment remains in doubt. For now, police are relying on field sobriety tests. Penalties include licence suspensions, vehicle impoundment, fines and possibly jail time.

TRANSPORT Saskatchewan’s restrictions around transport are modelled after post-prohibition liquor laws, where you’re only supposed to transport cannabis between legal places of consumption. As with the booze provision, though, it will likely prove a challenge to enforce.