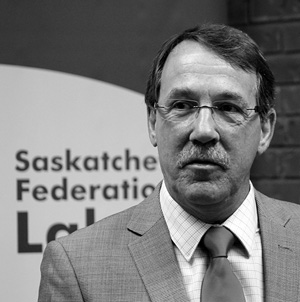 I met Larry Hubich on a recent Friday afternoon. Not just any Friday — this was the long-time Saskatchewan Federation of Labour’s president’s second-last Friday in his long-held position.

As this issue of Planet S comes out, the SFL will be holding its annual convention in Regina. And it will be at this convention that Saskatchewan’s union movement will elect a new president.

It will be a huge change, both for Hubich and this province.

Since 2002, Hubich has been an articulate and passionate voice for Saskatchewan workers, taking on politicians and business organizations looking to boost profits and wealth at the expense of the rest of us.

Later, after the Saskatchewan Party’s 2007 election, the Hubich-led SFL fought the Brad Wall government’s anti-labour legislation Bill 5 and Bill 6, which ultimately led to a 2015 Supreme Court ruling that Canada’s workers’ have an “indispensible” right to strike.

It was a huge win for Canadian workers, for the SFL, and for Hubich — and a highlight of his as president.

As Larry rides off into the sunset — actually, he’s riding off to spend more time with his grandchildren — I asked him if the labour movement was still relevant. (Hey, I can’t poke the guy after he’s gone, right?)

“Look at South Carolina,” says Hubich after what I assume is a slightly peeved pause. “There are states where the union density is at less than one per cent and they’re rotten with poverty and corruption, and there’s no minimum wage.

“So if you want to live like that, then let the labour movement disappear.”

I’ll take that to mean that the union movement is still relevant.

And not just the movement, but its made-in-Saskatchewan values.

“I’m not radical,” says Hubich. “I’m a small town boy, I grew up in small-town Saskatchewan and I’ve lived here my entire life. Part of the small-town philosophy that I grew up in was co-operatives, working together, building community.

“We were proud of our crown corporations — Saskpower, Sasktel,” he says. “I lived in that small town when Saskpower came through with the yellow tubes and put natural gas to every home in the town. And we did that ourselves, by the way. Saskatchewan people did that because there were no corporations interested in coming here and doing that stuff.

“So now we’ve built all this great infrastructure as Saskatchewan people through the cooperative philosophy — which is the same philosophy as the union movement — and we’ve got right-wing governments that want to give it away to their buddies.

“We’re going to push back,” says Hubich. “Unions have a role and a responsibility to push back against governments and employers and bad deals.

“That’s not a radical concept—that’s what we are in this province.”

Retirement, reshmirement — it doesn’t sound like Saskatchewan’s heard the last of Larry Hubich. And that, from where I’m sitting, sounds like it’s for the best.

As SFL president Larry Hubich has had memorable battles with right-wing people and organizations. I asked him to share his thoughts on a few of them. Quotes have been edited for length.

On John Gormley: “It kind of went off the rails with Gormley after the Most Available Hours debacle. I actually went on his show and I fielded questions for two hours. Gormley and his producer always baited the Federation of Labour — it’s part of his game, it’s part of his shtick. I think he’s using unions as a whipping boy to further his political agenda, and I got no time for it.”

On the Canadian Federation of Independent Business: “I certainly don’t have an issue with organizations representing their members [but] the CFIB is notorious for calling for a dismantling of our social infrastructure because they say their members don’t want to pay their fair share. They think minimum wage is too high, they think there should be no rules around workers’ rights, and I just think that’s wrongheaded.”

On The Canadian Taxpayers Federation: “I think the Canadian Taxpayers Federation is a fraud. They aren’t a federation, they don’t represent taxpayers, they have five members and what they call a bunch of supporters, but they’re not transparent. They don’t disclose their donors. They’re an astroturf organization from the right, and people like Jason Kenney come out of it. That’s all you need to know about my feelings for the CTF.