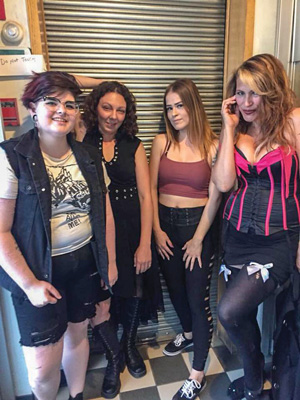 Jezebel is a Saskatoon female punk/pop/rock band with an unapologetic commitment to liberty, inclusion and empowerment. They released their first EP Forget Me Not in June, and are now working on a CD for next spring. Here are six songs they consider favourites. /Gregory Beatty

This is one song that really got me into playing drums. I was around 13/14 when I taught myself the song and started practicing it on my own. Playing it gives me an adrenaline rush! (Shaid Heimbecker: Drums)

I fell in love with this song when our band added it as a cover. It was written after a bomb blast in Northern Ireland during The Troubles when two boys died on a day when children were out buying Mothers’ Day cards and presents to give that Sunday. The lyrics ring true to events that are happening in the world today. (Terri Bear-Linklater: Backup Vocals/Rhythm Guitar)

This song has all my favourite elements to make me dance and sing. The other part I love are the lyrics, where Paul brings you to pivotal moments in his life: first as a child with his mother, then a teenager with his buddies checking out the ladies, then a budding musician smoking bud, and finally him finding love — all occurring, of course, late in the evening! (Jovan Larre: Lead Guitar)

Young death is the subject of many great books but no one tells it like Neko Case. Her lyrics and haunting voice paint vivid pictures of the murder scene, and the horror and desperation of experiencing the loss of life. It’s a horribly gorgeous song that will always be with me. (Jovan)

“Demolition Lovers”
My Chemical Romance
I Brought You My Bullets, You Brought Me Your Love (2002)

This is a story of two lovers running away together, similar to Bonnie and Clyde, told through a series of crescendos, raspy vocals, and tasty guitar riffs. You can hear the desperation in the singer’s voice as he tells this story of love and pain. (Max Bowman: Lead Singer/Bass Guitar)

Jack Off Jill is one of many fantastic girl bands in the ’90s. They wrote some amazing songs that inspired me and countless other women in music today. (Max)