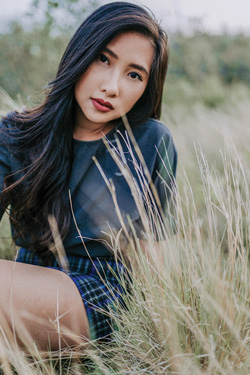 This r&b/soul singer-songwriter from Saskatoon runs an audio production, photography and videography company called Nolita Studios. Andrea — who also has a degree in interior design — plans to release new music in 2019. For now, here are six songs she considers favourites. /Gregory Beatty

Every time I hear artists such as Bon Iver, Adele, etc., cover this song I can hear the honesty, pain and sadness in their voices. Everything about this song is so soulful from the melody to the lyrics and piano playing. It’s a song that you can get away with playing one instrument and it’s enough to convey the song’s intent.

I grew up listening to Lauryn Hill, and it amazes me that she wrote “Ex-Factor” in her early 20s. Her songwriting style includes simple phrases that are relatable, raw and real. Lyrically, she turns awkward conversations into simple ones, and she sings without the fear of embarrassment or being judged. Her self-assurance in this song really speaks to me.

“Forever Blue” speaks to me on so many levels. It’s a song about fear, losing our loved ones, and coping with loss, knowing that it’s inevitable. The lyrics make us think deeply about what we have and what we take for granted.

I’ve been a long time Mree fan, and “Into The Well” is the first song off of her sophomore album. I was blown away when I first heard it. I couldn’t believe how much she had grown as an artist. Listening to this song reminds me that it’s okay to dive into new genres, and to challenge yourself and your listeners/audience to be open to new creations.

I love the honesty in the lyrics. I also love how soulful Kehlani’s vocals sound. The production is simply refreshing, and I never get tired of hearing it.

As soon as Justin Vernon’s falsetto kicks in, I can hear the clarity in his voice when he sings, “I was not magnificent” and, “I could see for miles, miles, miles”. The production of the track makes me happy and sad at the same time, but in a good way.