Return To The Infinite 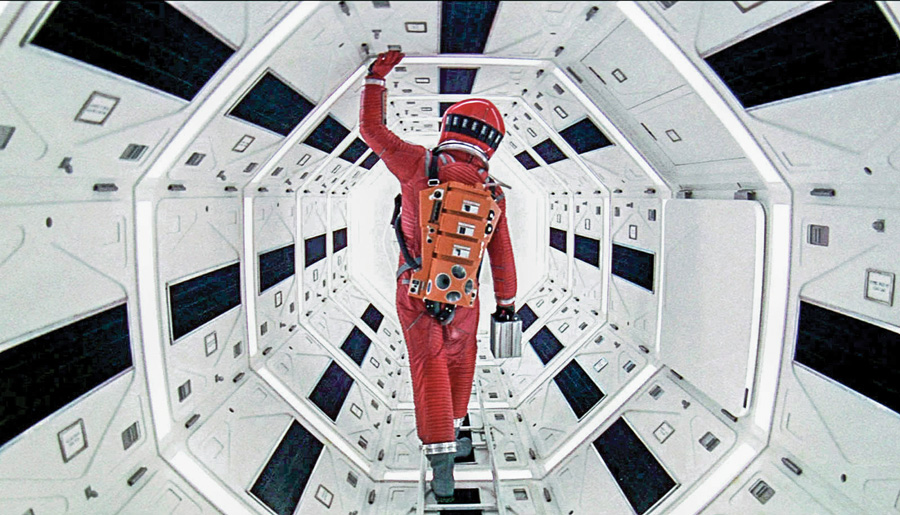 Saskatoon film fans might want to plan a road trip. One of the greatest movies of all time is getting an IMAX run.

The catch? It’s in Regina.

Call it another example of suffering for art.

When 2001: A Space Odyssey was released in April 1968 critical reception was mixed. “Monumentally unimaginative”, “immensely boring”, “morally pretentious and intellectually obscure” were some of the criticisms levelled.

To be sure, plenty of critics loved the movie. But there were naysayers. And the division wasn’t limited to critics, says University of Regina film scholar Phillipe Mather.

Mather has taught entire courses on 2001, and on Nov. 30 he’s speaking on opening night of a 50th anniversary IMAX presentation of the film at Saskatchewan Science Centre.

“The polarized response revealed a generation gap,” says Mather. “On one hand, you had the parents, the older folk out of the Eisenhower era who had gone through the war and had a much more arrested idea of storytelling and filmmaking. The younger generation, meanwhile, was part of the counterculture revolution.”

It’s likely true, too, that younger people were more familiar with science-fiction through grade B (and some A) Hollywood movies, literary SF, and even TV shows (Star Trek was winding up its second of three seasons on NBC when 2001 hit theatres). So they wouldn’t have been as baffled by director Stanley Kubrick and co-author Arthur C. Clarke’s tale.

But core to the counterculture movement was progressive politics and spiritual exploration, says Mather. And 2001 checks both boxes.

“One reason the film may have endured is the way it combined perennial themes of importance in our culture with concerns that were specific to the late 1960s,” Mather says.

“When you look at 2001, it’s clear it’s operating on two registers,” adds Mather. “There’s a mythological, even spiritual dimension, addressing issues such as higher powers and where we come from and where we’re going. But at the same time it’s addressing political issues that were pertinent then — especially the Cold War.”

Just make a minimal effort to put yourself in the seat of a 1968 viewer, and it’s easy to appreciate how ground-breaking 2001 was, Mather says.

“It does fit into what we might call ‘art cinema’. It’s elusive, symbolic, ambiguous,” Mather says. “But it was by an established Hollywood filmmaker with a $10 million budget, released by MGM in wide distribution. In a sense, though, it was almost experimental.”

Structurally, 2001 can be divided into four chapters. Set four million years ago, the opening scene sees humanity’s ape ancestors take a major evolutionary step, apparently with the help of an alien monolith. Then we shift into the future, with scenes set on an orbiting space station and the Moon.

That’s followed by a voyage to Jupiter, and a final “Star Gate” sequence that marks another major step in human evolution.

While the story had a lot of hard science and did an exceptional job depicting the reality of space travel (particularly weightlessness, and the disorientation of moving around without gravity), it also resonated on an intuitive/spiritual level.

“When the film came out, a Catholic organization actually awarded it a prize because they could identify its spiritual essence,” says Mather. “If you look at the music, some of the selections are choral pieces — avant garde, mind you, by Hungarian composer György Ligeti. Choral music is associated with church, so it definitely has that aura.”

Homer’s ancient Greek poem Odyssey and German philosopher Friedrich Nietzsche’s idea of the Übermensch are also referenced — the sentient computer HAL 9000, for instance, has a single eye like the Cyclops, while Strauss’ Thus Spoke Zarathustra is used on the soundtrack.

And for the hippie generation, the psychedelic Star Gate sequence would’ve resonated strongly.

So spirituality, in a mythological, religious, and even chemical sense, was there.

“I think he was trying to have it both ways where he introduced what, from his perspective, would’ve been a more materialistic approach. In fact, he even described 2001 as offering a scientific definition of God. But while he introduced those concepts from a hard SF perspective, at the same time he was using language that would appeal to our emotions and the idea of mythological questioning.”

The year 2001 was released, 1968, was a particularly turbulent one. You had the overarching spectre of the Cold War, with escalating U.S. involvement in Vietnam, the double-header assassinations of Martin Luther King and Robert Kennedy, student protests in Paris, the unrest at the Democratic convention in Chicago, and to top it off, Richard Nixon’s election as U.S. president in November.

“Kubrick has a satiric take on that, where we’re really not behaving any differently than in the prehistoric section where our Australopithecus ancestors fight each other,” says Mather. “When the monolith is discovered on the Moon, they touch it just like the apes did. There are the two ‘waterhole scenes’ (in prehistoric Africa, and on the space station with sparring U.S. and Soviet officials), and other parallels that undermine any sense of superiority we might feel.”

There’s also the famous jump cut where the bone Moon-Watcher tosses in the air after killing the rival tribal leader is replaced by an orbiting satellite. Shy about revisiting the nuclear theme after Dr. Strangelove, Kubrick was deliberately vague about its nature. But in Clarke’s novel it’s identified as a nuclear weapons platform.

While some aspects of 2001 will inevitably strike modern viewers as anachronistic (cough, gargantuan mainframe computers, cough), other technologies envisioned by Kubrick are very much part of the zeitgeist.

Inspired by World War II’s death and destruction and the “fallout” from the atomic bomb, pre-2001 science-fiction often took a skeptical view of science and technology.

The Apollo space program was in full swing then, of course. Another influence, says Mather, was the New York World’s Fair in 1964–65.

“Kubrick was a New Yorker, so he knew about that and hired a lot of the people who were involved,” says Mather.

“It shows the technopositivism of the era, as a lot of the exhibitors were major corporations such as IBM and General Electric who were showing their vision of the future,” says Mather. “So who does Kubrick end up hiring for all the design ideas but the same corporations.”

Three themes that leap out as still being relevant are artificial intelligence (and the ethical dilemmas and dangers it might present), militarization of space (Space Force, anyone?), and the growing possibility of alien life elsewhere in the galaxy (thanks to our discovery in recent decades of many thousands of exoplanets — some with Earth-like characteristics).

With aliens in science-fiction, says Mather, the big question is whether the attitude is xenophobic or xenophilic.

“2001 followed in the wake of what would’ve been negative ideas about aliens with so many monster movies in the 1950s,” he says. “It builds on that, but only in a subterranean way. You had this monolith, sort of a black box technology that’s inscrutable, so you don’t know what to think.

“In fact, it illustrated Arthur Clarke’s third law that any advanced technology is indistinguishable from magic. But as far as the aliens, what was really smart was to refrain from representing them. So many films, when they do that, become laughable. It reveals the anthropomorphic limits of our imagination.”

Instead, Kubrick opted in the Star Gate sequence to show the astronaut’s eyes in extreme close-up, seemingly stunned at what he sees.

“The message is in order to learn more about the other, we have to turn the mirror on ourselves,” says Mather.

Phillipe Mather will speak before the Nov. 30 screening of 2001. Tickets are available at sasksciencecentre.com.