Laughing At Her Mutilation 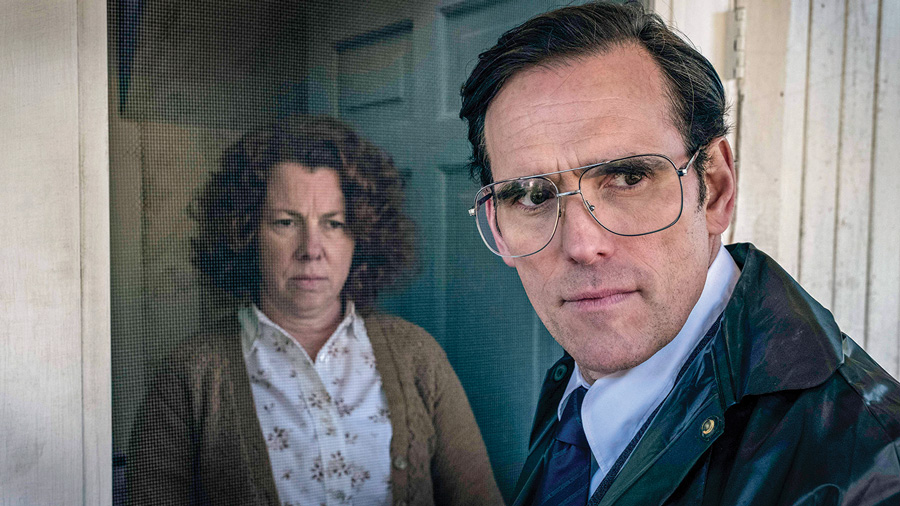 To describe Siobhan Fallon Hogan as “that actress who did that thing” would be to grossly underestimate her. Beyond brief yet iconic roles in Forrest Gump (the school bus driver) and Men in Black (Beatrice, Edgar’s long-suffering wife), Fallon Hogan has carved out a niche among European filmmakers trying to understand America through cinema. Michael Haneke (Funny Games), Lynne Ramsey (We Need to Talk About Kevin) and Lars Von Trier (three times!) have all employed her to striking effect.

It’s Von Trier who brings Siobhan (pronounced “sha-von”) back to the arthouse. His utterly controversial The House That Jack Built — the one with all the Cannes walkouts — gives the actress a long deserved plum role.

The House That Jack Built tells the story of Jack (Matt Dillon), a serial killer who considers murder his artistic manifesto. Fallon Hogan is Lady 2, the psychopath’s second memorable victim. While she plays a widow whose grief is weaponized by Jack, her segment provides comic relief, if only for a couple of minutes.

While she was in Toronto shooting the TV show What We Do in the Shadows, I talked with Siobhan at length about Jack and her career in general — so much so, I run out of space.

The first time you worked with Lars Von Trier was in Dancer in the Dark, 20 years ago. Do you remember your audition?

At the time, I was known for doing comedy but he didn’t know me at all. I auditioned for the prison guard, a very serious part. I had a newborn baby boy. I was up all night and by the time I got to the audition I was so exhausted, I was out of my mind. It worked perfectly.

I must be the “international girl” [laughs]. I think Michael Haneke for sure had seen Dancer in the Dark. I was supposed to be upper crust-y in Funny Games, but the way I talk is upstate New York and kind of blue collar. I was putting on a Shelter Island accent. He didn’t speak English and said to his AD, “could she please not talk that way?”. I said “tell him if I speak the way I normally do, it would be like I won the lottery. Because no one who talks the way I do has a sailboat”.

You must have been exposed to wildly different directing styles. I’m guessing you’re game for whatever they throw at you?

There’s another thing. I find with European directors, there’s no “above and below the line” like in the U.S. The project is the project and it’s all for one and one for all. That might mean that when you go to set, it’s a lot more casual. Whereas in the United States, we get a little bit on our high horses, and expect people to roll out the red carpet because you’re an actor, and lose sight of the project.

I saw some “confessionals” of you and Lauren Bacall while you were making Dogville. You seem like you went to war together.

We had the best time. One time we were going up this steep ramp to get to stage. She was like (imitates Bacall’s deep voice) “Siobhan, do you have anything lined up after this?” “No, do you?” “No. Can you believe it? I’m 80 years old. I’m still looking for my next job. It never ends, it’s so pathetic.”

Was it a shock to read the script for The House that Jack Built?

Here’s the thing. I know Lars. At first I was, “oh boy, this is rough”. If it had been the first script I’ve got from him, I would be, “what the heck is going on?” But I completely trust him. He has such a great way with actors and, if there’s a part of the script you’re worried about, he’ll work with you on it.

How is Lars Von Trier as a director? Is he detail-oriented or does he give you a bit of freedom?

One thing about him that I love is that he’s extremely funny, but when he goes to film you, he is very gentle, soft spoken. He won’t cut. When you cut a lot, you come in and out of it. If Lars doesn’t get what he wants, he would go back and talk you through it.

Considering Von Trier’s knack for triggering people, it’s no surprise Siobhan sometimes finds herself defending the Danish filmmaker. “People say all kinds of things about Lars, but he writes such unbelievable roles for women,” she says. She’s not wrong.

You were at Cannes at the premiere of The House that Jack Built. Were you gauging the reactions of the audience? I saw it at VIFF, full house, and only one person left.

In Cannes, there was a whole other layer of what was going on, it was his first time back… There was a standing ovation for 10 minutes at the beginning and at the end. Afterwards, on publicity day, we got a lot of questions like, “was there a part you thought was offensive to women?” I haven’t really met a serial killer I didn’t think was offensive. Did you expect Jack to be a nice guy and respect women?

Did you wince watching everything that happens to “your” body?

No, I laughed. I brought two of my kids, and my daughter was, “MOM! I almost threw up! Why didn’t you tell me? You weren’t just killed — you were choked, stabbed, dragged and your face fell off!” “Oh, yeah, I forgot about that.” They made a model of my entire body, painted like me, in my costume, and I was like, “oh my god, I’ve got to lose weight.”

Have you found yourself in a position in which you have to defend Lars Von Trier from his critics?

If anyone says anything about Lars, I’ll say he’s the greatest guy. Because of his fear of travelling, he’s mysterious to a lot of people. He has a great sense of humour, but this is not a time you can be irreverent. I would go to the moon and back for him. He is trustworthy, honest, funny, takes care of his cast. Every Friday, at five o’clock, there would be champagne.

You have managed to have a career and raise three kids. What the most helpful strategy you’ve adopted to have a fulfilling life?

You can do anything you put your mind to. Also, I was raised [to put] family first. When I went to Australia to do Charlotte’s Web, they would say, “you have a first-class ticket”. Okay, I need to turn it into coach tickets. When you have kids, you have to do right by them, make them part of it: I would get mine to be extras on set, go to school in whatever country I worked in. I can remember in Dogville, Lauren Bacall and Blair Brown would go to Paris for the weekend, I said “I would love to do that,” while playing with Play-Doh. They would respond “Siobhan, it goes fast enough. Don’t wish it away”.