Death Of A Beatle 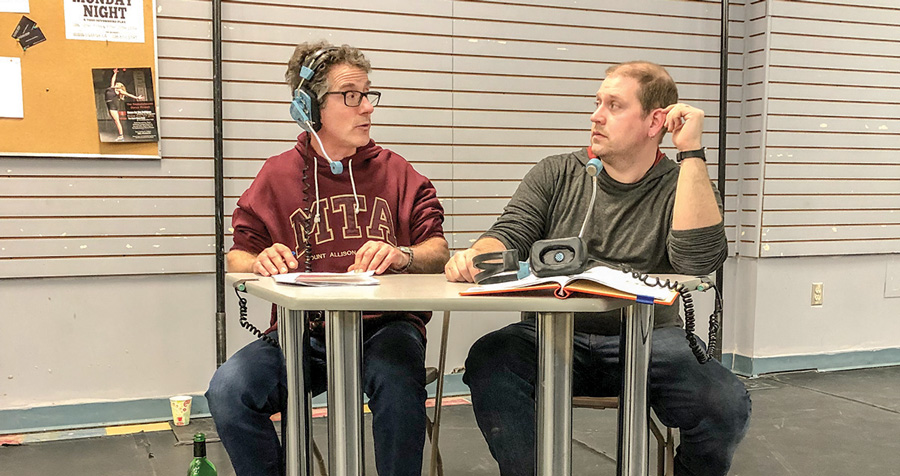 Monday, Dec. 8, 1980. For many people, it’s a date they’ll never forget. Most probably even remember what they were doing when they heard that John Lennon had been shot dead outside his Manhattan apartment with his wife Yoko Ono at his side.

Todd Devonshire was just six and he has no firsthand memory of that night. But he does recall how he learned about it.

“Mom and dad had Beatles albums, actual records, and I would listen to them,” says Devonshire. “I think I was 10 when I asked my dad, ‘How come the Beatles aren’t getting back together?’ And dad said, ‘Well, that’s impossible because a fan shot John Lennon.’

“The only way I had to confirm what happened was to go to the encyclopedias we had at home,” he adds. “I can still see a picture of that announcement to this day. So every time I’d listen to The Beatles I’d think about what we’d lost.”

That awful day is the focus of Devonshire’s new drama Monday Night, which Live Five presents at The Refinery starting Jan. 10.

The story took on deeper meaning in 2012, says Devonshire.

“I was watching YouTube, and there was video of the actual announcement Howard Cosell made on Monday Night Football. It was 10 p.m. when I saw it, and I bet it was 2 a.m. before I went to bed. I watched it over and over.”

In the pre-social media era, news wasn’t just a Tweet away. Through an unrelated coincidence, ABC had inside knowledge of the shooting, and Cosell’s announcement broke the news of Lennon’s death to millions of Americans.

For Devonshire, it was a compelling story, and with a Saskatchewan Playwright Centre 24-Hour Playwriting Competition coming up, he decided to see if he could turn it into a play.

“We had 24 hours, so I wrote out the broadcast and put my own spin on it and what would’ve happened behind the scenes through what I knew of the back story,” says Devonshire.

“I got third place, and the person in charge, Gordon Portman, said ‘You’ve got something here. Just keeping working with it.’ When I finally finished I asked him to direct and we applied to Live Five. They have a spot reserved each season for Saskatchewan artists, and I got it.”

“The first involves two musicians in New York who are protesting on a rooftop and are going to play a concert,” Devonshire says. “The second is a reporter who happens to be at the hospital when they bring Lennon in. He relays information to ABC, and then it becomes a battle between Monday Night Football executive producer Roone Arledge and broadcasters Howard Cosell and Frank Gifford as to what to do. Do we dump the game? Is Lennon dead? Then, of course, when Lennon dies Cosell didn’t want to make the announcement.”

In today’s frenzied media environment, it’s hard to imagine any news organization debating the ethics of breaking such a huge story.

“He was so brash and arrogant,” says Devonshire. “So it was nice to see him hesitate, but that’s how big an effect, I believe, The Beatles had on people. They could make you feel things you ordinarily wouldn’t.”

The play’s final part features interviews with people about that night and what Lennon meant to them as an artist.

“There are some touching stories there,” says Devonshire. “I’m not knocking the younger generation, but at that time music was a powerful force for change. The Beatles and Lennon were at the forefront of that counterculture, so if you’re a younger person, you might know the songs, but you might not understand how big they were, not just their entertainment value, but as a force for social change.”

Much was accomplished during the counterculture era, from women’s liberation and civil rights gains for racial minorities to youth empowerment, environmental awareness and a general loosening of social mores. But by the late 1970s a new era was dawning: neoliberalism. And it’s still with us today.

“Maybe for today’s generation who are wondering where all this greed started, with Reagan, Thatcher and trickledown economics, it literally started in the U.S. a month before Lennon was shot [when Reagan was elected president],” says Devonshire. “In a way, that signified the end of the counterculture movement, with a whole new age and attitude in America — and to a certain extent, the world.”

ABC’s debate about whether to break the story isn’t the only thing that will strike modern viewers as incongruous. It’s also hard to imagine a celebrity of Lennon’s stature being that available on a New York street like he and Ono were that night.

“There was the question of whether they should have security, and I think a part of him escaping The Beatles was just to be himself,” says Devonshire.

“I think that’s what made New York so attractive is that he could just be John there. So it was an escape from all the chaos that went along with The Beatles in the 1960s.”

While the killer is alluded to in Monday Night, says Devonshire, he remains unnamed. “There were mental health issues, for sure. One thing I know is he blamed Catcher in the Rye. He happened to be reading it at the time, but it just felt like ‘I either mention him or I don’t.’

“When I was writing it, all these other things were coming out and I thought ‘You know, let’s not mention him. Let’s leave it about Lennon.’ I have a line in the play where I say, ‘The only name that should ever be associated with Lennon is McCartney.’”

That’s not strictly true, as Yoko Ono is deservedly associated with him as well. And she is in the play, says Devonshire.

“The stereotype that went along with her at the time about how she broke up The Beatles is played up a bit. But it will be forgiven.

“And with Double Fantasy having just come out [on Nov. 17], she had a big influence on that, and it became his swan song.”

That fact adds an extra layer of poignancy to the story. After a five-year hiatus from music to focus on his family, Lennon’s Double Fantasy was met with critical acclaim. He was only 40. Who knows what else he might have accomplished?

“Every Dec. 8, I have a moment where I pause and think ‘Oh man. Look what we lost,’” says Devonshire. “So we’ll see if people who see the play can take something away from that.”