Spidey In The Details

Danny Dimian’s Spider-Verse was built for the “pause” button 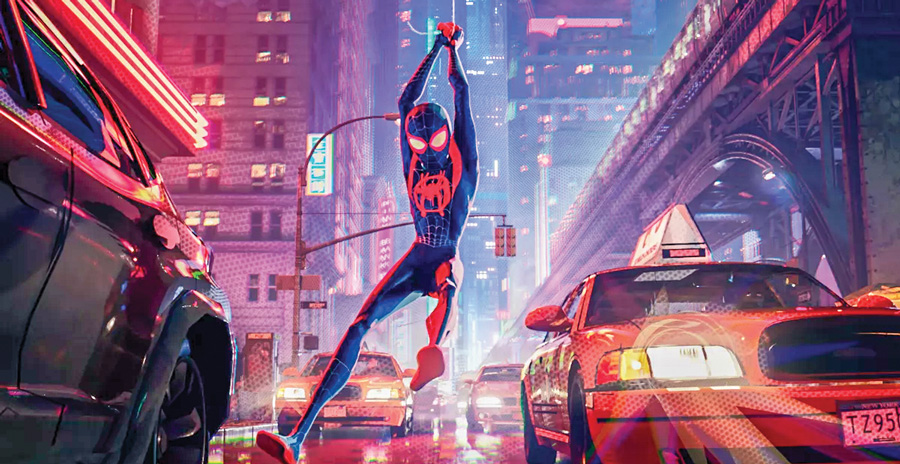 Spider-Man: Into the Spider-Verse
Now Playing

Spider-Man: Into the Spider-Verse doesn’t feel like any other animated film. Its hand-drawn look, distorted edges, motion lines and noticeable grain give the movie a comic-book feel — an aesthetic choice many have tried to achieve, unsuccessfully (cough, Ang Lee’s Hulk, cough).

According to Spider-Verse VFX supervisor Danny Dimian, the only thing they knew when they started  the project was that producers Phil Lord and Chris Miller (The Lego Movie) were aiming for a film so visually innovative that audiences wouldn’t understand how it was made.

“We wanted it to feel like it’s rooted in the comic-book world, but not limited by that,” says Dimian. “We had a hunch that in order for it to feel emotional and connect like a real world [would], it shouldn’t be as simple as one unified look.”

“We wanted the film to be clearer, to feel like the whole world was printed in ink,” adds Josh Beveridge, the head of character animation. “Nothing could be smooth or soft. The characters were to be re-sculpted and reshaped based on their angle. The camera language was thought of as a panel in a comic book.”

This approach opened the door to a mix of styles — charcoal, manga and surrealistic, to name a few — that somehow hold together. Making them interact seamlessly was Beveridge’s favorite challenge.

“We hung these universes on the same thread,” he says. “The rules of physics didn’t apply the same way to each one of them.”

Dimian says their strategy to emphasize facial performances paid off in spades. “We stylized our models,” says Dimian. “We wanted them to be simple, but our first test didn’t have the emotion that we wanted. Then we noticed that much of the emotion was in the lines.”

The illustrations were turned into rigs that were used to animate the film.

“I think it’s the main reason why the characters are so relatable,” says Dimian.

Sony Pictures’ Imageworks subsidiary has worked with Spidey since the first Sam Raimi movie in 2002, so it’s possible to compare live action and animation, at least in terms of workload.

“All the other spider-men are rooted in making something believable within a plate,” says Dimian. “We decided to pay more attention to design and style, and less to realism. We were completely free from anything in the real world.”

As well, a seemingly technical decision to not use traditional motion blur made a huge impact in the final product, as your eye perceives each frame as a comic-book panel.

“I had people asking me about things they think they saw, and I’m always impressed that even though they didn’t get the specifics, they felt it,” Dimian says.

“Because this is pop art and there is graphic clarity, you process it faster,” adds Beveridge. “When things stand out so much, they’re logged in your brain — even if they’re not on screen anymore.

“Often in our medium we’re too gentle with people,” says Beveridge. “For me, it’s not out of bounds for them to feel there’s more going on than what they’re able to understand — as long as they’re getting what’s critical to the story.”

While they haven’t officially been announced, a Spider-Verse sequel and spinoff are in the works. Dimian says we can expect more surprises.

“We were looking for a new visual language and we just learned how to ride this bike,” he says. “There’s a lot of exploring to do.

“You get hints in this movie: every character has a distinct look, and we only tackled one of them.”