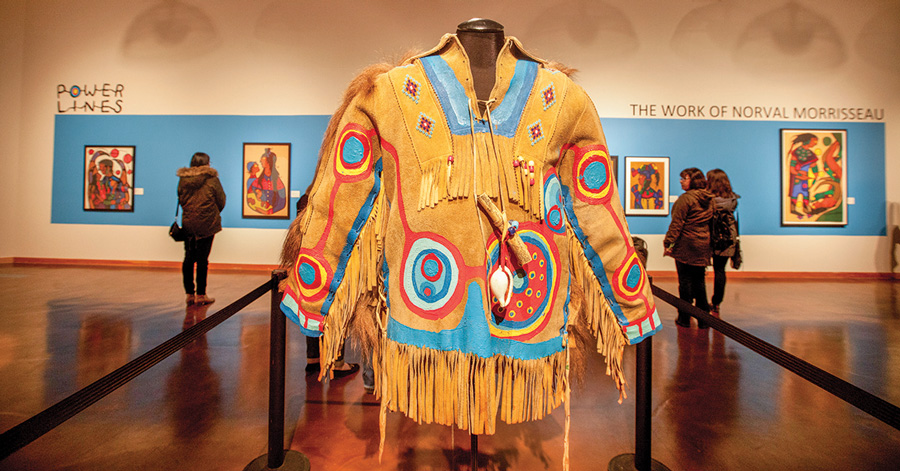 Wanuskewin Heritage Centre has been hosting the exhibition Power Lines by famed Anishnaabe artist Norval Morrisseau since mid-October. To close the show of paintings and artifacts, gallery curator Felicia Gay has organized a two-day symposium that will be held Jan. 19–20.

Before moving to Ottawa, Robertson was at the University of Regina. While there, she published Mythologizing Norval Morrisseau: Art and the Colonial Narrative in the Canadian Media. So she’s well qualified to deliver the keynote.

“I’m taking up the concept of how Morrisseau uses land in his paintings,” says Robertson. “People don’t think he painted land necessarily because he’s always been understood and presented as a painter of Indian legends.

“But really what he’s painting is that way of knowing land, and the interconnected relationship with it,” she says.

“The notion of power lines that Felicia’s used to name the exhibition, really, those are the lines that interconnect us with all living beings including the land, water and sky,” Robertson adds. “So I’m trying to turn around some of the ways we think about land and how we can see that in Morrisseau’s work.”

Picasso Of The North

Born in Port Arthur (now Thunder Bay) in 1931, Norval Morrisseau was raised on Sand Point Reserve in northwestern Ontario. He had first-hand experience with residential schools, the pass system and other genocidal colonial policies, but he also had a strong grounding in traditional Ojibwa culture thanks to living with his grandparents.

Morrisseau’s grandfather, in fact, was a shaman. As a youth, a vision quest connected Morrisseau with a sacred bear. Critically ill at 19, he was given the name Copper Thunderbird in a healing ceremony.

After marrying in his early 20s, Morrisseau began making art to support his family, and in 1962 in Toronto, he became the first Indigenous artist to have a show at a contemporary art gallery. Before this show, Indigenous art was typically treated in a museum sense — as ethnic craft.

His initial Toronto show created a sensation, with the nationally circulated Weekend Magazine comparing him favourably to Pablo Picasso, and every painting selling on opening day. It made sense. While Morrisseau was strongly influenced by Objiwa imagery, symbolism and narrative, he met non-Indigenous artists and collectors and had been exposed to Western and other artistic traditions.

Morrisseau worked productively until the 1990s when his health, impacted by periods of hard street living, began to fail. But he did live to see a major retrospective of his work mounted by the National Gallery of Canada in 2006 before passing away in 2007.

When Robertson was researching Mythologizing Norval Morrisseau she went back to the earliest media reports on him. From the outset, she found he was treated more as a curiosity than a legitimate artist, with media tapping into various stereotypes associated with Indians. Later, when his personal problems surfaced, they also received salacious coverage that reinforced negative, racist perceptions of Indians.

“It was sad, frustrating, and really did become a bit overwhelming,” says Robertson of the obvious racism in the media’s attitude. “But it all points to a need to really rethink the importance of his art and the art of his contemporaries.”

While Morrisseau’s talent was certainly recognized (he was regarded as the leading proponent of the Woodlands School) Robertson says his work never got the consideration it deserved because media couldn’t look past the myth they’d constructed.

“Because it took so long, with some of the misconceptions I talk about in the book related to primitivism and exoticism, for Morrisseau and his contemporaries to get their due, art scholarship in Canada has a lot of work to do — especially for Morrisseau, who gave Canada a whole new visual language,” she says.

Robertson, as noted, will speak on Morrisseau’s treatment of the land in his paintings.

Landscape, of course, is a staple of Western art. Typically in the genre, the scene is neatly framed, meticulously depicted and often highly romanticized.

For Robertson, the different strategies for representing the land reflect a philosophical divide.

“Rather than take possession of the land, which is what we see in Western landscape painting, Morrisseau is seeing himself as part of that living sense of the land. He begins from such a different place than thinking about the land as something that is owned by someone.”

Colonialism is another theme that runs through Morrisseau’s work, says Robertson.

“I think a lot of his paintings had a strong connection to colonial narrative, but it’s long been dismissed or misunderstood as something potentially more simplistic. But as a man living in the 1960s and ’70s during a time of activism, he was responding to those ideas and issues in his work.”

Remember, too, that Morrisseau was operating within a colonial power structure where he would have received a lot of pushback had he been too outspoken in his politics. When he was creating a mural for the Indians of Canada Pavilion at Expo ’67, for instance, his concept (which was titled Earth Mother With Her Children) was actually censored by government bureaucrats because it depicted a child and bear suckling at an Earth Mother figure.[1]

“Except for a few very overt political paintings, he was having to code his work in the way he was using visual language,” says Robertson. “But once you begin to understand that language, you can actually see he was creating commentary. It just wasn’t available to people who were not prepared to understand the way he was painting those ideas.”

Building on the research she did for Mythologizing Norval Morrisseau, Robertson currently heads a team of 14 researchers at Carleton who are taking an in-depth look at Morrisseau and his art career.

“It’s never been done for an Indigenous artist in Canada and if we’re going to start somewhere, he’s the artist because he really started it all with the first exhibition in a contemporary art gallery in 1962,” says Robertson.

The project has a five-year timeline, and the goal is to produce a major publication and organize a second retrospective to build on the National Gallery’s 2006 exhibit.

“He did have some interest in France and Germany, and of course the United States. But I do believe that a treatment like this will open the eyes of a global audience to what Morrisseau offers.”

Other Indigenous artists await in-depth analysis too, and Robertson hopes other researchers are inspired by her project and take up the challenge.

“If you think of just the Indian Group of Seven, for example, each of them deserves this kind of treatment.[2] Just on the work of Daphne Odjig alone, there’s so much that needs to be done.”

For more information on the symposium, see wanuskewin.com.

[1] David Garneau’s speaks on “From Indian to Indigenous: The Indian Pavilion at Expo 67 to Sovereign Indigenous Display Territories” at the University of Regina on Jan. 25 at 3:30 p.m.