Facing the Monumental, a 30-year retrospective of installation, photography, video and sculpture by Anishinaabe artist Rebecca Belmore, comes to the Remai Modern from the Art Gallery of Ontario. Following its stay in Saskatoon, it travels to the Colorado Springs Fine Arts Center and Kohler Arts Center in Wisconsin with more venues likely after that.

The exhibition is curated by AGO Curator of Indigenous Art Wanda Nanibush. Of Anishinaabe descent herself, Nanibush has a long history of working with Belmore. The show title, in fact, is taken from a 2012 performance Belmore did at Queen’s Park in Toronto on Canada Day. Site of the Ontario legislature, the park is home to numerous monuments commemorating key figures in Canadian/Ontario history such as Queen Victoria, John A. Macdonald and Oliver Mowat.

“The performance was related to monuments, but Rebecca was also attracted to a 150-year-old tree there,” says Nanibush. “She decided to work with it, and think about Earth’s monumentality and the tree being a living, breathing thing that had survived everything that had happened and was witness to it and is still standing just like Indigenous people who have withstood an intense amount of cultural genocide.

“When you take the title out of that work and bring it into this show, it was more about facing the big critical issues of our time,” adds Nanibush. “We have the knowledge. But can we face them? How do we face them?

“I think Rebecca’s a particularly brave artist in the way she faces things head on.”

Born in northwest Ontario near Thunder Bay in 1960, Belmore is a member of the Lac Seul First Nation. She started working as a performance artist in 1987, and within a few years had branched out into other media. During her career, she’s had many notable achievements, including twice representing Canada at the Sydney Biennale (1998 and 2006), along with the Venice Biennale (2005). In 2013, she received the Governor General’s Award in Visual and Media Arts.

When Nanibush was selecting work for the retrospective, she says, she wanted to show Belmore’s true range.

“As a performance artist, she’s made some works that really stand out in people’s minds,” says Nanibush. “So one of the goals I had was to get people more familiar with her media installations, photography and sculpture.

“I also wanted to show the connection between her performance art and sculpture,” Nanibush says. “In a performance, for instance, you’ll see her hammering nails. Then you’ll see a sculpture in another room that’s made from wood and nails so you can see that, for her, the work is all interrelated.”

A common thread that runs through much of Belmore’s work, critics have noted, is beauty. “She has a real knack for distilling complicated emotional [realities] down to a beauty,” agrees Nanibush. “For her, it’s about drawing people in.

“When something is beautiful, people want to look,” she adds. “Beauty also opens you up more inside, so you’re more open to what’s coming in the work. Then as you get closer, you start to see some of the harder content that’s there.

“So beauty is a way to access the work.”

That’s important, because some of the subjects that Belmore addresses in her art, such as residential schools, murdered and missing Indigenous girls and women and the broader ravages of colonization, homelessness, and climate change, are truly disturbing.

“But she never creates victims,” says Nanibush. “It’s always about people being resilient.

“There’s always some sense of the person, and remembering who they were as a human being,” she says. “Or there’s a sense they were resistant to the violence they were experiencing. That’s an important aspect of her work.” 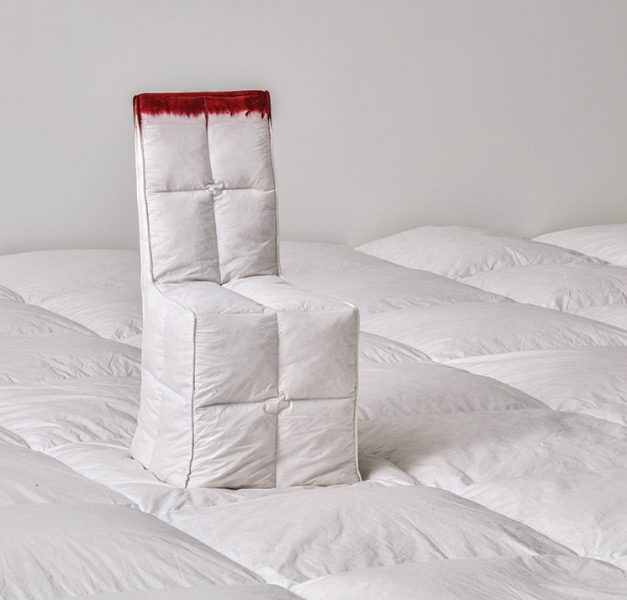 Raised near Lake Superior, Belmore currently lives in Montreal which, of course, sits on the banks of the St. Lawrence River. She’s also lived in Toronto (which is on the shore of Lake Ontario), and Vancouver (ditto, the Pacific Ocean). So it’s not surprising that water, as an elemental force, is another important aspect of Belmore’s art.

“As an Anishinaabe, we think of water as the lifeblood of the Earth,” says Nanibush. “None of us can exist without it. But neither can the Earth. So it’s something that’s part of the interconnectedness of all things.

“Rebecca’s done a number of pieces looking at everything from why Indigenous communities don’t have access to clean drinking water to how we might end up having wars over water,” says Nanibush. “Many people see it has a healing space too, so water has a lot of connotations.”

A third theme that figures prominently in Belmore’s work is blood. Biologically, water actually makes up 92 per cent of blood, so both fluids exist as elemental forces.

“Blood, too, signifies, that we’re related,” adds Nanibush. “It also signifies being Indigenous, and also the experience of violence.”

Not all the works that were in the Toronto show will be coming to the Remai, unfortunately. But on the plus side, some works will be shown in Saskatoon that weren’t at the AGO. They include pieces that Belmore made previously at Wanuskewin Heritage Park, along with an outdoor sculpture that addresses the freezing death of Saulteaux First Nations teenager Neil Stonechild on Saskatoon’s outskirts in November 1990.

“Freeze is made out of ice, and has ‘Stonechild’ carved into it,” says Nanibush. “Then it sits and melts, basically. If it’s really cold, I guess, it might take awhile. But it’s just to draw attention to the starlight tours. It’s really amazing, because that piece has never been done in Saskatoon, so it’s kind of exciting for that to come home.”

Facing the Monumental opens on Feb. 1 with a conversation between Nanibush and Belmore, and performance by hip hop artists T-Rhyme and Eekwol. Other programming highlights include a Feb. 5 panel discussion with host Lyndon Linklater and Saskatoon Police Chief Troy Cooper, and a March 1 performance in response to the exhibition by Lori Blondeau and Jeneen Frei Njootli.