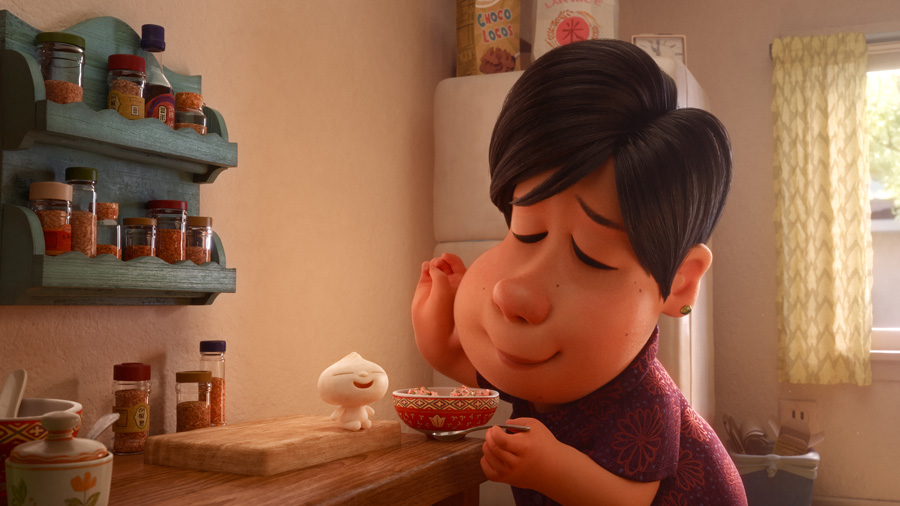 A Canadian getting a Best Animated Short Oscar nomination isn’t unusual. It is, however, when they do it under the Pixar banner rather than the NFB’s (though there’s one of those this year, too: Animal Behaviour).

Bao is an eight-minute film about two unusual protagonists: a handmade dumpling and a Chinese-Canadian woman with empty nest syndrome. The delicious-looking bun comes to life, to the housewife’s delight. Unfortunately for her, the dumpling goes through the same stages a kid would: from unconditional, all-consuming love to growing detachment to the pursuit of independence.

There’s a moment in Bao that makes audiences gasp, but this being a Pixar short, it still has to have a happy ending which, alas, demonstrates the Disney subsidiary’s unwillingness to push limits. At least Bao displays its Canadian DNA proudly: the CN Tower and TTC make cameo appearances.

Bao was written and directed by Domee Shi, a Torontonian who did storyboards for Pixar before jumping to the director’s chair. Most of the department heads were female, many of them in leadership roles for the first time.

How did you pitch your short to Pixar?

DOMEE SHI: In 2015 the studio did an open call internally. It didn’t matter what job you had, you could pitch three ideas. I was one of maybe 50 people pitching. It was just me in front of a whole panel of judges, kind of like American Idol. Bao was picked in the second round.

Did you know from the beginning Bao was the one?

SHI: I really like all three ideas but I knew even if Pixar didn’t pick any of them, I would try to make one on my own as a side project.

The ending has a gasp-inducing moment. Did audiences reactions live up to your expectations?

BECKY NEIMAN-COBB: We knew it was different, but we got used to it. Then we premiered at the Tribeca Film Festival. I just remember sitting in the audience and it was really fun to hear that reaction. In the span of a few seconds people went through a range of emotions: shock, sadness, delight.

I made my mom a character in a short once. She was thrilled in the beginning, but months later she started giving me notes. Was that your experience?

SHI: My mom is really happy she’s the star of the short, but my dad’s a little bit jealous. He’s an artist himself — he was an art professor in China and is a painter now. When I showed it to him for the first time, he said “I really like it… but I have some notes about the colour.” Classic Chinese dad.

Speaking of notes, was there a particular one from Pixar higher-ups that was particularly useful to you?

SHI: When we were working on the story reels, people were confused where the father went. I was like “forget about the dad! It’s not about him, it’s about the mom and the dumpling!” Then I showed it to Brad Bird (director of Incredibles 2) and he had really good advice to stop that question: have the dad exit the stage so the audience stops thinking about him. We incorporated it into the short and nobody asks that anymore: he went to work and, at the end, he came home.

You’re both Pixar staff. How is it different to have Pete Docter (Up, Inside Out) as Chief Creative Officer?

SHI: He is very humble, which is really cool to see from a leader. He would always say “hi!” to you when walking down the hall, and makes time to hear your thoughts and opinions. He won’t necessarily apply them, but would offer the time to listen. You can tell he loves animation and wants to keep Pixar fresh and innovative.

NEIMAN-COBB: He was our executive producer on Bao, and we both worked on Inside Out. He has been a huge inspiration and supporter.

Where do you go from here?

SHI: I’m already working on my next project at Pixar. It will be a feature film and I’m directing it. It’s still super early on in development, but hopefully we can talk more about it in the not-to-distant future.

What’s your favorite Pixar short, outside yours?

SHI: I really like For The Birds. It’s so simple: a cute little lesson about bullying. Bao is very complex and there’s a lot in it, so I really appreciate the simplicity.

NEIMAN-COBB: Mine changes a lot, but right now it’s Piper. I love its animation — it’s so appealing and charming. I’m a new mom, so I see my baby in that baby bird.

See Bao on Incredibles 2’s DVD/BluRay. The Academy Awards are on Sunday, Feb. 24.