Two For The Road

Laurel and Hardy were more interesting than they were funny 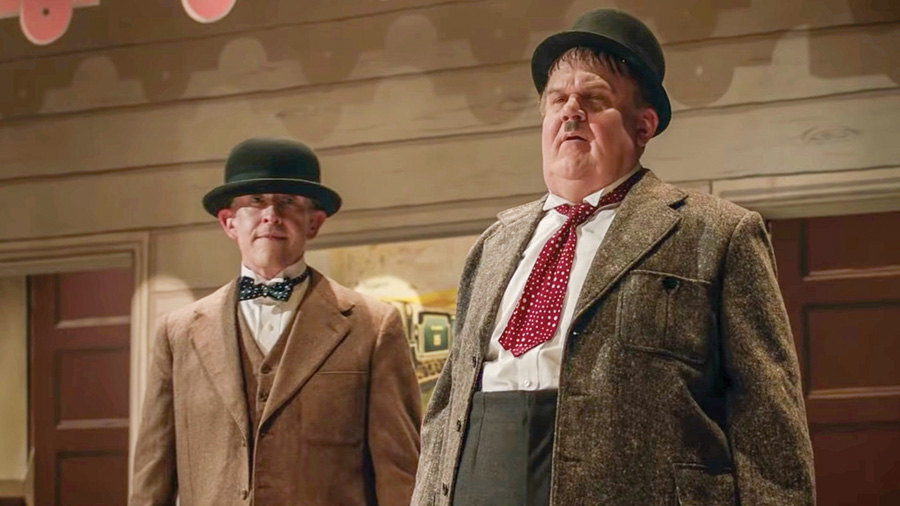 They weren’t nearly as groundbreaking as Harold Lloyd and Buster Keaton — let alone Charlie Chaplin — but the comedy duo of Stan Laurel and Oliver Hardy enjoyed the spotlight longer than those legends. The pair seamlessly transitioned from film’s silent era to the “talkies” by keeping dialogue to a minimum. Nobody cared about their conversational skills anyway — their shtick was slapstick and their timing was a beauty.

Stan & Ollie steers clear from the duo at their heyday. Instead, this bio-pic focuses on the waning days of their popularity. Ever heard the saying people only show their true colors when they’re down? That’s this movie’s motto.

We do get a glimpse of the team’s late-30’s glory days. Thinking himself untouchable, Stan Laurel (Steve Coogan) butts heads with head honcho Hal Roach (Danny Huston). Laurel wants Chaplin money, and threatens to move to a different studio if he doesn’t get a raise, but Oliver Hardy (John C. Reilly) doesn’t follow. The rift never quite heals.

Cut to 16 years later. No longer Hollywood superstars, Stan and Oliver agree to a UK tour to make ends meet and maybe reinvigorate their careers. The possibility of a feature — a Laurel and Hardy take on Robin Hood — keeps the illusion going, although small audiences at their two-bit theatre shows don’t bode well.

Stan has grown bitter but his good nature and belief in the work won’t let him give up. The more gregarious Ollie could live without their comedy act, but his debts and gambling addiction keep him tethered to the skinny dude, to the point of putting his health at risk. Their relationship is tested throughout and the realization they really don’t know each other away from the stage takes them by surprise.

Midway through the tour, their wives (Shirley Henderson and Nina Ariadna) join them. Their snark and put-downs deserve their own showcase.

Stan & Ollie is a low-key affair. The comedy is mild and dated, but true to the era. It’s stronger as a character study, even though Laurel and Hardy are not particularly complex. Its edge is nonexistent but the film ambles along amiably.

While the dialogue is charming and the recreations are great, the movie works thanks to superb performances by Coogan and Reilly. Both are accomplished impersonators (particularly Coogan — see The Trip saga) who build their characters from the inside out. The British actor softens his trademark sharp, dry wit (Alan Partridge is nowhere to be seen) and John C. Reilly turns on the charm. They complement each other and have an easy rapport.

The person behind-the-camera isn’t who you’d imagine for this good-natured ditty. Director John S. Baird’s previous credits include the movie adaptation of Irvine Welsh’s Filth — Welsh’s work is many things but wholesome isn’t one of them — and an episode of the decadent (and cancelled) HBO series Vinyl. His approach here is meat-and-potatoes, and it feels refreshing.

After spending most of the decade dedicated to comedy, John C. Reilly seems to have rediscovered drama. His terrific turns in Stan & Ollie and the criminally under-seen The Sisters Brothers suggest we’ve got some great performances to look forward to. Forget Tom Hanks — Reilly is America’s true everyman.