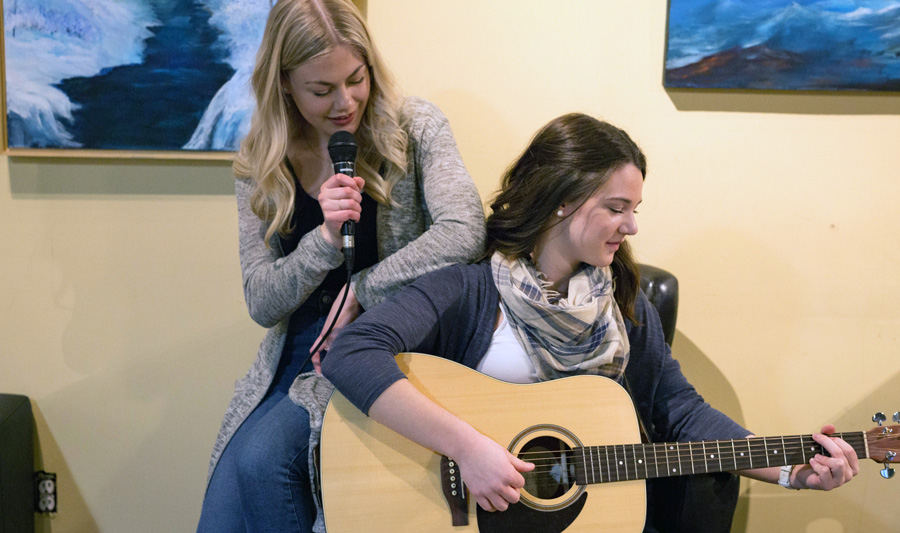 Alexa & Katelyn share a love for music and enjoy giving new sounds to familiar melodies as a Saskatoon-based duo. Choosing six songs for this column, they say, was especially difficult as they have hundreds of covers in their repertoire from a variety of genres. The six songs they settled on, they add, “express who we are as musicians and represent the creativity that performing offers us.” /Gregory Beatty

We had to pick this song first as it was the tune that started it all for us. We sat down with the piano, stripped the pop song down and made it our own. We chose this song because Britney Spears is a pop icon that we grew up listening to. The lyrics may not be overly relatable, but it is a familiar song that brings both of us a sense of nostalgia.

When you hear this song on the guitar, you cannot help but bob your head and sing along. This pick is especially important to Katelyn as it was the first song she learned to play on her guitar alongside her dad.

This song can put anyone in a good mood with the bouncy tune and cute lyrics.

This song embodies the “coffee house” music style we are both so drawn towards. The song came into our lives at a difficult time. It was a day where we had to celebrate a marriage and grieve the loss of a friend. We believe the lyrics can relate to both of these seemingly opposite events as it reminds us to be thankful for the people around us and to cherish life.

This song is a classic. Everyone has experienced love and heartbreak. This song is a symbol of how impactful love can be and how songs about love can draw connections between people from an array of experiences.

This is our favourite Ed Sheeran song. Both the lyrics and music leave an impression every time you hear it.