She’s a singer in a smoky room, smells of wine and cheap perfume 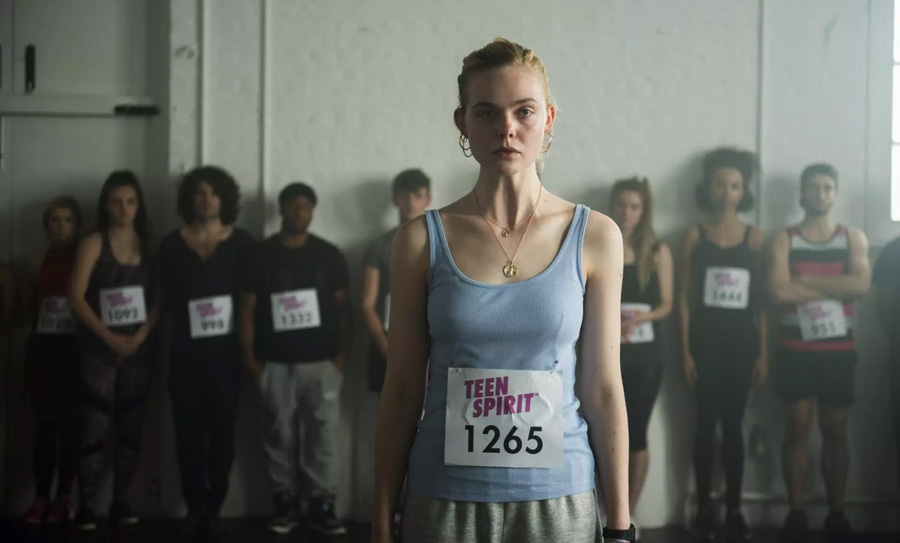 Few filmmakers know what to do with Elle Fanning. Giving her roles like Mary Shelley or some manic pixie dream girl part is a waste of her talent. Fanning is best when playing introverts. Somehow, she manages to convey inner turmoil behind a vacant expression. Just pay attention to Super 8, The Neon Demon or The Beguiled. In each of those movies Fanning seems to know more than she lets on.

First time director Max (son of Anthony) Minghella noticed. Minghella — better known as the honourary Winklevoss in The Social Network and Ofred’s baby daddy in The Handmaid’s Tale —has put Fanning at the centre of the straightforward rags-to-riches story starting his career behind the camera.

Teen Spirit is a traditional singing competition flick that gets a boost from the two leads’ acting skill and the layer of grime covering even the brightest limelight. Violet (Fanning) is a teenager stuck in Wight (a.k.a. Nowheresville), England. Her singing talents are going to waste in a dive bar and she can’t run away because her mom counts on Violet’s meagre income to make end meets.

Here’s where the movie hits fantasyland: One of the bar’s regulars is Vlad, a scary-looking barfly (Zlarko Buric, Pusher) who turns out to be a teddy bear, and once-well-known tenor until unexplained events forced him to trade the stage for a rickety van.

As the movie gods would have it, the British equivalent of “American Idol” lands at Violet’s doorstep, the aforementioned “Teen Spirit”. The girl wants in, but needs adult supervision to participate and her mother won’t hear of it.

If only there was someone with time in his hands. A fellow singer, perhaps, willing to coach her…

You know exactly how this goes, so more power to Elle Fanning and Max Minghella for keeping it interesting. Zlarko Buric has made a career playing brutish characters with more heart than is convenient. His arc — a man whose second shot to the “big time” breaks down, just like his first — is more touching than Violet’s standard Cinderella narrative.

Fanning has decent pipes, but that only matters if you like Eurovision-type music (may god have mercy on your soul). There’s a fair amount of techno-pop, including full renditions of a couple of songs. They won’t change your life, but add to the experience. That said, the use of No Doubt’s “Just a Girl” is infinitely less grating here than it was in Captain Marvel. (I realize this this my second consecutive month chirping Brie Larson and company, but their holier-than-thou attitude rubbed me the wrong way.)

For what it is, Teen Spirit is spectacularly humourless, normally a sign of a first-time director taking himself too seriously. The film has a couple of opportunities to take the road less travelled, but ends up sticking with the tried and true (actual line from the movie: “Sing! From your heart!”). It does strikes the right tone depicting the pitfalls surrounding young women, whether that’s having to trust a stranger or dealing with adults that don’t have their best interest at heart.

Of all three angry-white-woman-turned-singer movies to open in recent months, Teen Spirit is the most accomplished. Her Smell is basically Elisabeth Moss doing Courtney Love (if Courtney Love were a walking cliché) and Vox Lux could have been brilliant, but lost its nerve at the last minute. Teen Spirit knows where it’s at.