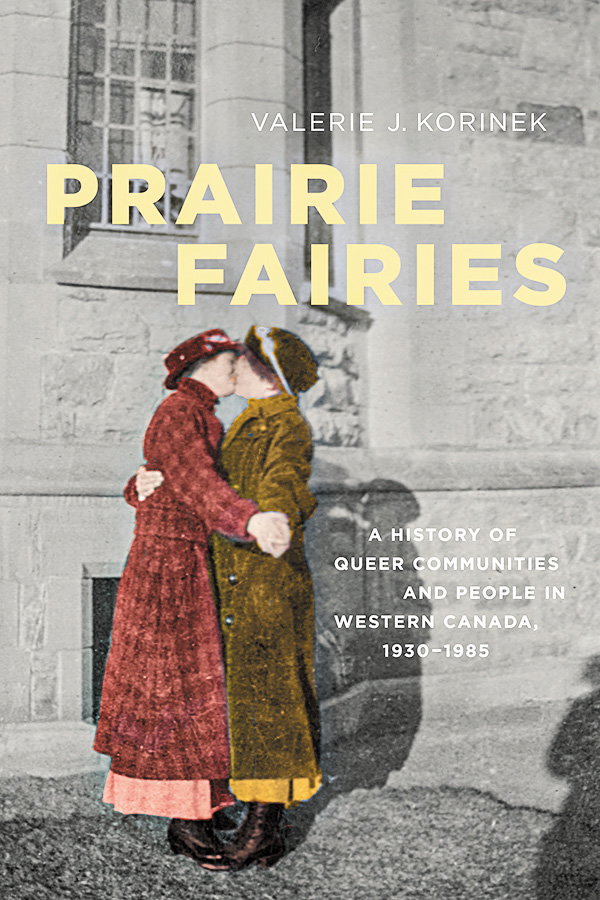 Valerie Korinek was born and raised in Toronto, which boasts one of Canada’s largest and most robust LGBTQ+ communities. When she moved to Saskatoon in 1996 to take a job at the University of Saskatchewan, she recalled during a recent phone interview, she didn’t have high hopes for what type of community she would find.

Based on what she knew of Saskatchewan, with its traditionally high out-migration rate for economic reasons, and generally socially conservative climate, she assumed that when most Saskatchewan-born LGBTQ+ people reached adulthood, they would leave for larger, more queer-friendly centres.

Once she arrived in Saskatoon, though, she realized that wasn’t so.

“One of my first recollections is going to a community dance and seeing older lesbians and gay men dancing,” she says. “You just didn’t see that in Toronto — in part because it’s a different situation with lots of commercial bars and clubs. Middle aged and older people don’t tend to go to the disco. But this was a community dance, so all ages, and it was a very interesting window into a world I didn’t know existed.”

Korinek has a PhD in cultural history from the University of Toronto, so she was naturally keen to learn more about the history of Saskatoon’s queer community. From that initial spark, she went on in 2018 to publish Prairie Fairies: A History of Queer Communities and People in Western Canada, 1930–1985 with University of Toronto Press.

The first step Korinek took in researching Prairie Fairies — which in April won the Scholarly Writing Award at the Saskatchewan Book Awards — was to follow up on a colleague’s suggestion to contact university librarian Neil Richards.

“Neil was a tremendous resource for me,” says Korinek. “When I met him in 1997, he was very modest and unassuming. But I quickly realized that the work he’d done maintaining an archive of material from the early 1970s, when he’d moved from Ontario himself to take a job in Saskatchewan, was phenomenal.”

The early ’70s was a time of significant activism in the queer community, with all sorts of social, cultural and advocacy organizations being formed.

“He had material from all the major prairie cities,” says Korinek. “Primarily Calgary, Edmonton, Winnipeg, Saskatoon and Regina, but also smaller centres such as Red Deer and Prince Albert. So it was regionally rich, but it also had materials from the rest of Canada.”

Korinek’s next step was to visit other prairie cities to see what archives they had. In Winnipeg, she struck further research gold when she found a taped collection of interviews with over 50 older LGBTQ+ people that had been done in 1990 and 1992.

The first part of Prairie Fairies covers 1930–1970. Korinek uses the word “subterranean” to describe the life most LGBTQ+ people led in prairie cities back then.

“It’s a hidden world that doesn’t want to draw attention to itself, purposely, because this is before it was feasible to be openly gay or lesbian and not risk tremendous consequences to your employment, family and all kinds of things,” says Korinek. “So people were appropriately cautious, or else they risked violence and even [arrest] because it was still a crime.

“But these worlds, once found, were actually quite vibrant,” she adds. “People were able to transform corners of diners, or a couple of sets of tables at the local railroad hotel, that were known as queer space. And they were able to do that without drawing undue attention to themselves.”

In the 1950s, house parties started to happen, says Korinek, and loosening liquor laws made it easier for lesbians to socialize. “Until then, respectable women only went out with a male escort. Once we have cocktail lounges women are free to go out on their own. So that makes these lesbian communities, that might have been very hidden, visible.”

Sports was another way lesbians connected, says Korinek. “But it took time. It wasn’t just a case of being on a baseball or hockey team and then presuming all your teammates were lesbian. You had to wait a bit to break the ice, and move cautiously.”

Sometimes, the discreet nature of LGBTQ+ life made it tough for newcomers to find fellow queers, says Korinek.

“One interviewee I spoke with in Regina talked about how, as a university student, he desperately wanted to meet other gay men. He’d been socializing at a couple of bars and when he finally learned where some of the men congregated he realized he’d been in the same bar. But he’d been at one end, and the gay corner or set of tables was at the other end.

“From today’s perspective, where it’s so easy to find these spaces because they’re signed and open, you can’t imagine the frustration of being literally in the same room but not realizing your people were 50 feet away,” she says.

The second part of Prairie Fairies covers 1970-1985. Korinek chose 1985 as the end point because that’s when the HIV/AIDS crisis hit and queer activism switched gears to focus on caring for people with AIDS and getting governments to take action on the crisis.

As for 1970, the Civil Rights movement was in full swing then, and — along with feminist, African-American and Indigenous communities —  queer people began organizing to press for social change.

“The Stonewall Riot in New York in June 1969, which is what most of our June Pride celebrations commemorate, really triggered a moment in time where gay and lesbian people became more overt about their activism,” says Korinek.

“That’s not to say Stonewall created activism, which is what people sometimes think — that before then it was just darkness. That’s not true. But it really was a visible moment.”

Canada had a lot going on too, says Korinek.

“In 1969, an omnibus bill was introduced in the House of Commons to decriminalize homosexuality. It’s actually a very imperfect bill, but it does offer some legal protection to same sex male partners in a private space.

“So that’s one moment where there’s a discussion about homosexuality, and the notion that it should no longer be criminalized,” she says. “Although many gay men would still be harassed by police and arrested for so-called ‘public’ sex or any sex that took place outside a private home.”

Another key moment came in 1971, with the first gay and lesbian demonstrations in Vancouver and Ottawa. “They were called We Demand, and spoke back against how inadequate decriminalization had been in 1969,” says Korinek. “They also drew attention to the ways gay and lesbian people in Canada were oppressed and harassed by the police, government, and religious and social organizations.”

A third driver of activism, says Korinek, was the Toronto gay and lesbian magazine Body Politic. The magazine was distributed nationally and had some regional coverage, so it was a valuable forum for LGBTQ+ advocacy in Canada.

People were traveling more by then too, so LGBTQ+ people from prairie cities could visit larger centres with more dynamic queer communities, then come back with ideas on how to build their own community.

Universities were another important source of activism, says Korinek.

“First, they provided space for people learning to become independent adults where they’re perhaps living away from home for the first time. So you have some freedom there. Second, they were full of students criticizing the status quo — and all those debates fed a desire for change,” she says.

“As well, most of the faculty at the time were not from [the Prairies]. They arrive and bring ideas and knowledge of politics and life elsewhere. So they could be quite influential as leaders.”

Most LGBTQ+ people, though, opted to lead their lives without much activism, says Korinek.

“They felt that simply congregating in a gay club was a radical enough act. They didn’t want to push the envelope, and we have to respect that because we have to realize how people were appropriately scared about the ramifications of being too visible.

“Would you lose your job, be kicked out of your apartment, be attacked?” she says. “These were concerns people had.”

Whether they were leaders in the LGBTQ+ community, or simply members, queers who lived in the period covered by Prairie Fairies paved the way for future advances in LGBTQ+ rights. And for that, they all deserve credit.

“People coming out today don’t have it easy,” Korinek says. “There’s still homophobia and violence, particularly for trans people. But we do have more role models that people can see. So I hope people read the book and say ‘Wow, this is history that I didn’t know existed’.”