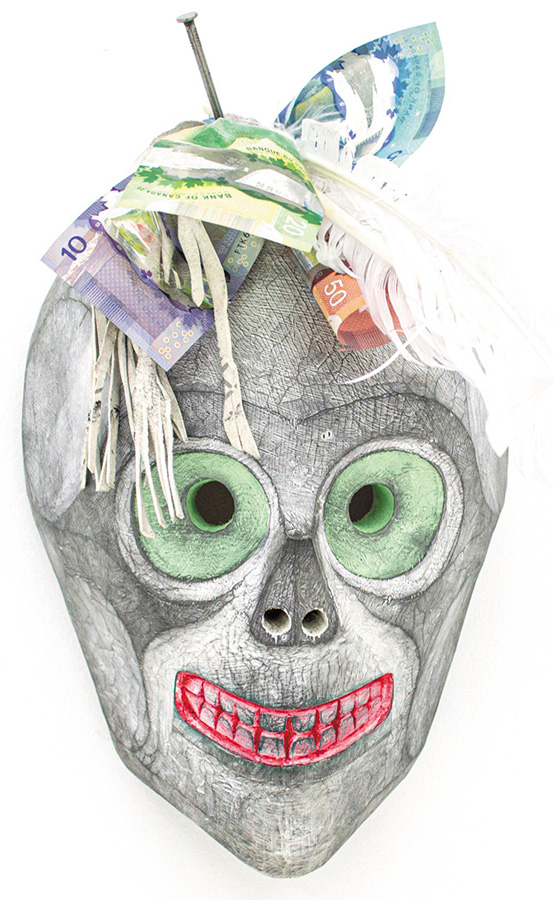 Kwakwaka’wakw First Nation artist Beau Dick passed away at the age of 61 in March 2017. Before he did, his long-time Vancouver art dealer LaTiesha Fazakas promised to follow through on several projects.

And she did. But more on that in a moment.

Born in Alert Bay on Vancouver Island’s northern coast in 1952, Dick studied carving under his father Benjamin and grandfather James, and also studied under and worked with other master artists such as Robert Davidson, Bill Reid and Doug Cranmer.

Dick, a scraggly bearded, wild-haired and cheerful-looking man, was best known for his ceremonial masks and other carvings derived from Pacific Coast First Nations culture. Throughout his career, he exhibited nationally and internationally, with one highlight being the 2010 Sydney Biennale. Dick was also artist-in-residence at the University of British Columbia from 2013–17.

“I met Beau in 2000,” Fazakas recalled during a recent phone interview. “I worked at a different gallery then, and he came in to sell a piece of art and we immediately had this great rapport. He was such a special human being. When I saw his art, I thought there was something so incredibly powerful that everyone should be able to experience.”

One project Fazakas facilitated after Dick’s death involved delivering work to Documenta 14 which was held in Athens (Greece) and Kassel (Germany) from April 8–Sept. 17, 2017. She also collaborated with filmmaker Natalie Boll to complete the documentary Meet Beau Dick: Maker of Monsters which was released in July 2017.

One final project Dick had in the works was this exhibition, which debuted at New York’s White Columns Gallery this spring, and features a 96-page hardcover catalogue with commentary by Fazakas, John Cussans and Candice Hopkins.

Now, the show has come to the Remai Modern.

“Because the coast was so plentiful for food and resources, people didn’t have to travel very far,” she says. “That’s how you ended up with a culture that had a material or artistic practice. There was enough time and resources that you could have an artist class who could create things like totem poles and masks for ceremonies.”

Even in winter months, Pacific Coast First Nations could still harvest some food. But most of the fishing, gathering and hunting would be done in the three other seasons. Come winter, wealthy families would host feasts called potlatches where they would distribute gifts and re-enact various ceremonies and stories.

That all changed with colonization, says Fazakas.

“The potlatch was banned from the 1880s to the 1950s. Other than people being told of the ban, and being afraid of it because they knew they could possibly get in trouble, it was mostly ignored at first.”

But in 1921, she says, 45 people were arrested in Alert Bay for potlatching.

“Twenty-one went to jail for up to three months, and the others were only allowed to escape jail if they gave up their family treasures, regalia and so on.

“So in 1921 the ban was actually prosecuted for the first time,” says Fazakas. “And because it was so severe, it really impacted the cultural practices for a long time.”

The local Indian agent, judge and church minister took the confiscated goods and sold them for their own profit.  That was totally illegal, of course, and in the 1970s and ’80s there was a big push by the Kwakwaka’wakw to have the artifacts returned.

The greed of the three officials is especially ironic, since the potlatch is dedicated to sharing resources within the community.

Coincidentally, the crackdown came in the wake of the Bolshevik Revolution in 1917, Winnipeg General Strike in 1919, and a general climate of labour activism. Given the paranoia of the day, did the potlatch’s unabashedly “socialist” spirit finally catch the federal government’s attention, prompting it to act in 1921? Possibly.

Yet Canada has long celebrated its own winter holiday of festive gift-giving and community celebration. And it was perfectly legal for Pacific Coast First Nations to participate, says Fazakas.

“If it was Christmas, people were allowed to give gifts. So the ban was obviously racist. A lot of times, people had feasts under the guise of it being Christmas. They had hideouts built in their homes so they could continue. But it had to be very secret.”

Consumer capitalism was a big concern of Dick’s, says Fazakas.

“He saw the greed, and the unsustainable aspects of capitalism, and the problems for the environment because of it. We can’t keep buying and throwing away and making more at the rate we are, and not end up living in a garbage heap,” she says.

For Dick, the answer lay in the Kwakwaka’wakw tradition of Winter Ceremonies.

The number four, with its association to the seasons, directions, medicinal plants and more, is considered sacred in many Indigenous cultures. So both the exhibition and catalogue use four as an organizing principle, says Fazakas.

A logo for the exhibition shows two people in obvious distress being devoured by a crazed being with huge, incisor-laden jaws.

The image embodies a concept which is core to the Kwakwaka’wakw world-view. On one hand, it simply reflects the natural cycle of life, with predators devouring prey, herbivores devouring plants, and so on. But it also contains a cautionary warning about the danger of consuming too much and throwing the natural cycle out of balance.

That message is reinforced in one Winter Ceremony highlighted by Dick. It’s traditionally performed by the Hamat’sa Society, and re-enacts a legend where four brothers kill a cannibalistic giant called Baxwbakwalanuksiwé, and acquire his supernatural powers.

To be initiated into the society, you have to go through a ceremony where you become possessed by the giant’s ravenous spirit, so you try to eat everything in sight, then the spirit gets purged from your body.

“Each piece in the show is actually a character from the Winter Ceremonies,” Fazakas says. “But Beau also put a contemporary twist on some of them that confront the times we live in and the problems with the capitalistic society we have.”

One example is Towkwit Head (2016). It’s made of red cedar, and represents a female shamanic being that, in ceremony, is decapitated, set on fire, and then resurrected. Here, though, Dick has wrapped the head in a black plastic garbage bag with a rip in it which references our throw-away culture and the scourge of plastic pollution.

“He also did this amazing skull,” says Fazakas. “Skull imagery is big in the Winter Ceremonies. There are a lot of ghosts and spirits portrayed in the dances. So he made a skull mask and nailed $85 dollars in Canadian bills to the skull. So these are all twists on the Kwakwaka’wakw tradition.”