50 years ago people walked on the moon. Happy Lunarversary, humanity 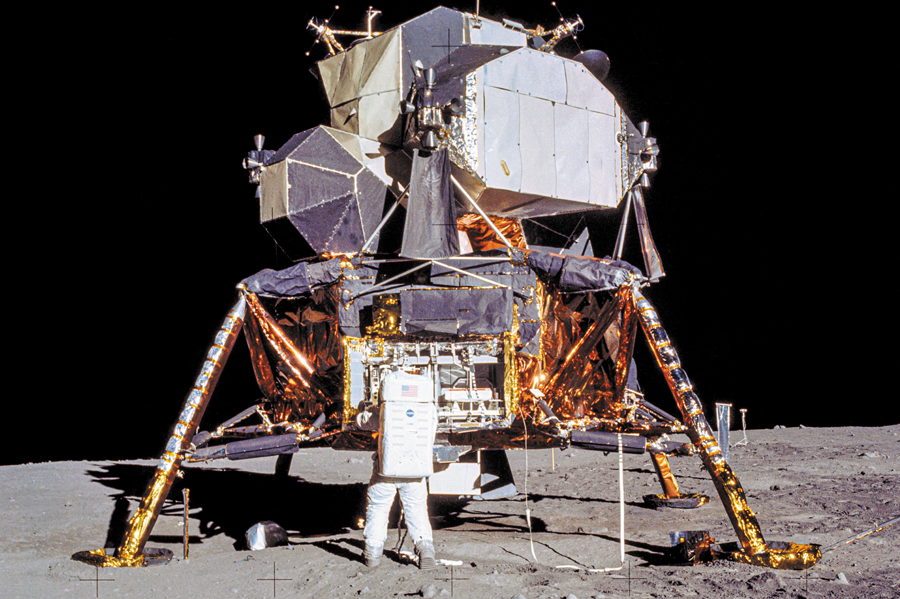 Realistically, you’d have to be around 60 to have solid memories of the Apollo 11 Moon landing on July 20, 1969. University of Saskatchewan astronomy students Rina Rast and Brennan Rodgers are nowhere near that age. In fact, even their parents don’t have strong memories of that day, they said in a recent interview about a 50th anniversary celebration of the landing that the university’s Astronomy department is hosting on Saturday, July 20.

“I remember studying the moon landings in high school in grade 10, and being like, ‘Oh, that’s cool,’” recalls Rast. “I watched a couple of documentaries too.”

Since Apollo 11, humanity has landed rovers on Mars, explored asteroids and comets, studied Venus, Jupiter and Saturn in detail, and conducted flybys of Mercury, Uranus, Neptune and the dwarf planet Pluto. We’ve even had two spacecraft (Voyager 1 and 2) transmit messages from interstellar space.

Through space telescopes and other sophisticated instruments we’ve also made many amazing discoveries outside the solar system — chief among them, Earth-like exoplanets in orbit around many thousands of distant stars.

All are notable accomplishments. Still, even 50 years on there’s something special about that Sunday evening in 1969 when millions of people worldwide sat glued to their TV sets watching grainy black-and-white footage of Neil Armstrong and “Buzz” Aldrin descend from the Eagle lander and set foot on the Moon. [see sidebar]

While Rast and Rodgers were born decades later, they’ve had a chance to revisit that historic moment in the run-up to the department’s celebration.

The highlight will be a screening of Todd Douglas Miller’s 2019 documentary Apollo 11.

“It’s all digitally restored footage, and the quality just blew me away,” says Rodgers. “You can see Neil’s face through his [visor] and Buzz’s reflection in the glass when he’s turning knobs and stuff. When we were watching, we had to stop and ask ‘Is this real footage?’

“There’s some never-before-seen footage too,” adds Rodgers. “They dug pretty hard into the archive and found stuff NASA itself didn’t even know about. They also increased the frame rate. I think it was shot at five frames a second, so they bumped it up and made it clear as day. It’s very visually impressive.”

Rast says watching the documentary gave her a renewed appreciation for how technically challenging the mission was. “It helped me realize just how good of a pilot Neil had to be. Before they even got to the Moon they had to separate the lander from the command module and then dock them again. I’m not very good at backing up in a car, so the idea of doing something like that in space is really incredible.”

The screening starts at the Neatby-Timlin Theatre at 8 p.m., and is specially timed so that when Armstrong steps on the Moon in the film it will match the exact Saskatoon time 50 years earlier when the step actually occurred.

“After the screening, there’s going to be a star party,” says Rodgers. “So it’s also a chance to showcase the observatory where people can bring their own telescopes or look through the historic Duncan telescope.

“The Moon’s not going to be up until around midnight,” he adds. “So we’ll see how many people want to stay that late. But there are lots of other fun things to look at to celebrate astronomy in the community.”

While plenty of nostalgia accompanies the Apollo 11 anniversary, the Moon is generating new headlines these days. In January, China landed the Chang’e 4 rover on the far side. That marked another first for humanity. And as we were going to press, India was preparing to launch Chandrayaan-2 with the goal of landing at the Moon’s south pole.

The U.S. plans to return to the Moon, too. Initially, NASA’s first step was going to be the Lunar Gateway project which would put a station in orbit around the Moon where crews could conduct scientific research in preparation for a projected 2028 landing.

Canada is an international partner in Lunar Gateway. But that project was put in doubt recently when the Trump administration, likely alarmed by China’s success with its far side mission, announced it wanted the landing to happen in 2024.

V-P Mike Pence even went so far as to call the Moon a strategic asset. That lent an air of Cold War intrigue to the proposal — which is sadly ironic, considering that the original Cold War was the driving force behind the Apollo program.

Technically, under a 1967 UN Treaty, countries are prohibited from making sovereign claims in space. But with the way the superpowers have been acting lately, it’s an open question whether they can be trusted to honour the treaty.

Then there are all the private corporations involved in space exploration. For them, profit is usually the bottom-line motive.

And the Moon does offer considerable commercial potential.

Iron, aluminum, platinum and titanium have all been found there, so mining could be lucrative. Due to constant bombardment from the solar wind, the Moon’s surface also contains an isotope of helium (He3) that will one day be used to power fusion reactors.

The Moon’s ultimate value, though, lies in it being a staging ground for future space missions. Because it only has one-sixth Earth gravity, rockets can be launched much more cheaply than on Earth, which would open up opportunities to mine asteroids and journey to Mars and beyond.

The Moon’s south and north poles are of special interest because deposits of water ice exist there that could be sourced for life support and to make rocket fuel. NASA is even working on a 3D printer that would use “local materials” to build habitats and other equipment — which would reduce costs even further.

While humanity’s return to the Moon will undoubtedly produce commercial benefits, it will be positive for science too. And that has Rast and Rodgers excited.

Even the rocks and soil collected during the Apollo missions are still yielding new discoveries. In fact, NASA deliberately held some material back in the 1970s with the expectation that future technologies would permit more thorough study.

Right now, the current theory is that the Moon was formed when a Mars-sized body called Theia collided with early Earth over four billion years ago. With NASA set to release untested samples of lunar material, and new research being done by various space agencies into the Moon’s geological history, scientists will be able to investigate that theory further.

Just as the Apollo 11 Moon landing united humanity back in 1969, Rodgers and Rast hope the upcoming anniversary will inspire people to rethink the current state of our world.

“Something Carl Sagan said that always spoke to me is when you look at Earth from space you recognize we’re all members of one species,” says Rodgers. “You also recognize that a species that’s at war with itself is doomed. So I always like the astronomical perspective because when you really get a sense of how big and majestic the universe is, it makes our quarrels and feuds seem so petty and silly.”

In the early years of the space race the U.S. trailed its Cold War rival, the USSR. In October 1957, the Soviet Union launched the first satellite (Sputnik), then put the first human in space in April 1961 (Yuri Gagarin).

Anxious to counter the perception the U.S. was losing, President John F. Kennedy proposed to Congress in May 1961 that America commit itself to landing a man on the Moon before the decade was over. He followed that up with his famous “We choose to go to the Moon” speech at Houston’s Rice Stadium in September 1962.

The Apollo program, which followed Mercury and Gemini, was an undeniably ambitious (and costly) undertaking. Here’s how it played out. /Gregory Beatty

1967 NASA (and its corporate partners) began testing the Saturn rocket in 1961. Simultaneously, they built and began testing the lunar spacecraft with its two-part command module and lander. Just a month before the first crewed mission, though, tragedy struck when astronauts “Gus” Grissom, Ed White and Roger Chaffee were killed in a launch pad fire on Jan. 27, 1967.

1968 NASA conducted an extensive investigation and found numerous deficiencies in design, quality control and general procedures. The crew cabin where the astronauts died, for instance, had a 100 per cent oxygen atmosphere. When fire broke out, NASA realized, the oxygen fed it to create an inferno. So NASA switched to a less volatile 60/40 oxygen/nitrogen mix.

Apollo 8 launched on Dec. 21, 1968, and saw Frank Borman, Jim Lovell and William Anders become the first humans to leave Earth orbit when they journeyed to the Moon over 70 hours. Once there, they made 10 orbits, then returned to Earth on Dec. 27. On the fourth orbit Anders took his amazing “Earthrise” photo.

Apollo 9 and 10 followed on March 3 and May 18, 1969. The former was crewed by James McDivitt, David Scott and Rusty Schweickart, and tested the lunar lander’s propulsion and docking systems in Earth orbit. Crewed by Thomas Stafford, John Young and Eugene Cernan, Apollo 10 was a dress rehearsal for the landing where Young and Cernan flew the lander (with its famous call sign Snoopy) to within 15.6 km of the Moon’s surface to scout Apollo 11’s proposed landing site in Sea of Tranquility.

1969 On July 20, Neil Armstrong and Edwin “Buzz” Aldrin made history when they landed on the Moon while Michael Collins remained in orbit. After disembarking, Armstrong and Aldrin did a 2.5 hour “moonwalk” where they set up some scientific instruments and collected over 20 kg of rocks and soil. After 21.5 hours on the Moon they lifted off and docked with the command module. Following their triumphant return to Earth, Apollo 12 astronauts Charles Conrad and Alan Bean (with Richard Gordon in the command module) joined Apollo 11 in the history books when they landed at Ocean of Storms on Nov. 19.

1970 Apollo 13 was immortalized in Ron Howard’s 1995 blockbuster starring Tom Hanks, so most of you probably know about the explosion that occurred on April 13 when James Lovell, Jack Swigert and Fred Haise were closing in on the Moon. To conserve power, they shut down the command module and transferred to the attached lunar lander, and after swinging around the Moon (and solving a bunch of gnarly engineering problems) they returned safely to Earth.

1971 Again, NASA conducted an investigation and made more design tweaks for Apollo 14 which launched on Jan. 31. That mission is notorious for Alan Shephard’s prank of hitting two golf balls on the Moon with a makeshift six iron.