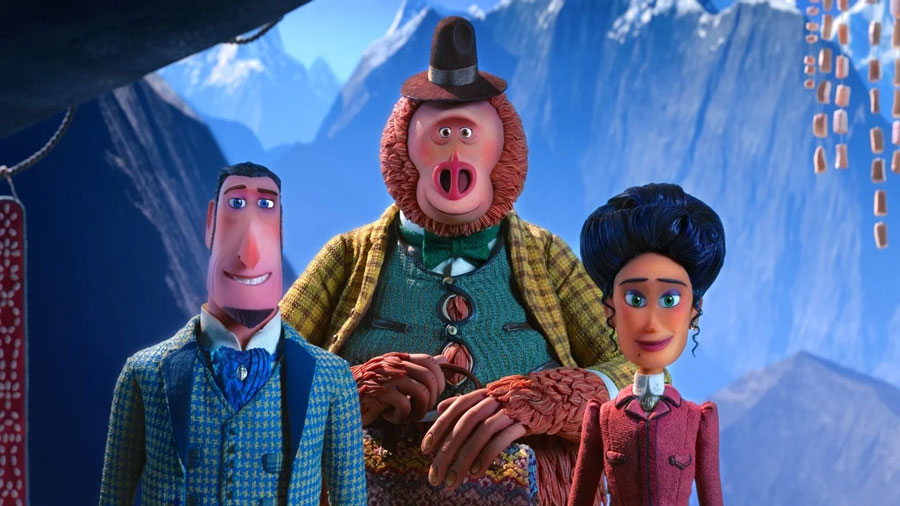 It’s a little disheartening that despite delivering consistently first-rate movies, Laika hasn’t had the success of Pixar or Illumination. Their latest, Missing Link, made less than US$25 million against a budget of $100 million.

Audiences were wrong to stay away. Missing Link is a straight-up comedy, one that draws freely from old westerns and Sherlock Holmes movies. Its hero is Sir Lionel Frost (Hugh Jackman), a swashbuckling adventurer who stands for evolution and the scientific method.

A letter from the Pacific Northwest revealing the existence of the Sasquatch sends Frost on a new adventure, one worth all his chips. The beast (Zack Galifianakis) turns out to be a happy-go-lucky eight-foot-tall character suffering chronic loneliness. The Sasquatch offers Sir Lionel proof of his own existence, as long as the explorer gets him to the Himalayas where his cousins — the Yetis — live.

The message and the hijinks blend seamlessly, same as the combination of stop-motion animation and CGI. There’s no low mistakes: superb voice acting (Emma Thompson is the standout), complex action scenes and terrific messages for children (women are as capable as men, Darwinism is more sensible than intelligent design, conservation is preferable to exploitation).

Perhaps that’s where Missing Link “faltered”: too woke for its own good (this is where we are at now).

Now that the movie is becoming available for home entertainment, it’s a good opportunity to give it a shot. I had the opportunity to talk to the writer/director of Missing Link, Chris Butler just before the film hit theatres last April. Butler carried the brunt of the promotion, never mind the presence of Jackman, Galifianakis and Zoe Saldana in starring roles. “It’s my baby”, he explained. “I started this project 15 years ago.”

How did you keep yourself interested for that long?

You do it because you love it. If I stop enjoying the movie, I’m not doing something right. I watched the movie a lot, pretty much every weekend for two years. I wanted to remind myself of the overall experience. That helps me to keep perspective. Animated features are so detail-oriented, it’s easy to get carried away and forget what the movie is about. I probably have seen Missing Link hundreds and hundreds of times, and I still love it.

Laika has always been able to attract top talent. How did you pitch Missing Link to the likes of Hugh Jackman or Emma Thompson?

You write them a letter and put together a book that sums up the movie. We made this lovely fake leather explorer’s journal. In it, there was art work, paintings, a bit about the movie and the characters. Then you send them the script.

Missing Link seems geared to a younger audience than previous Laika movies. Was this the intention from the beginning?

I think so. After I finished ParaNorman, I felt I wanted to do something more colorful, more playful. That made sense to the studio. Laika’s brand is that each story has its own unique voice. It was a natural progression: We love everything we do, the darkest stuff, the slightly old stuff, but it felt it was the right time to do something more exuberant, more colorful and skewing a little younger. Although there’s so much in it that plays to adults just as to kids.

How did you determine how the missing link should look?

He’s based on a very rough drawing I did years ago. We’ve since described it as a hairy avocado. It’s a simple shape and that spoke to a lot of people, kind of like the Rosetta Stone of the whole movie. We decided to stylize it in a way that was very bold, graphic and simple. That led to a lot of challenges for the puppets, especially for Link. Because of his shape —a big, pear-shaped, furry thing without a neck or shoulders— it’s quite difficult to make as a practical puppet. All the hair on his body was individually sculpted out of clay in graphic pattern and then cast in silicon.

As the scriptwriter of your own movies, have you ever talked yourself out of writing a scene because of how difficult it would be to animate it?

No. Sometimes when I’m writing I think “this is going to be very difficult”, but I’m actively encouraged not to limit myself. This is film number five for the studio. Every time we make one of these, we push the boundaries and by now I’m pretty confident we’ll find solutions.

Compared to ParaNorman, do you think you’re a different director now?

ParaNorman was my first movie and there was a lot of stuff I was learning or didn’t know. On top of that, I had another director (Sam Fell) to bounce ideas off. You can’t do that on your own. Sometimes that’s a lot of pressure, but it’s also liberating because you’ve creative control.

When you have a comedian like Zack Galifianakis known for his improvisation skills, do you leave some room to allow this to come out?

Improvisation needs to be a natural progression of the script. The main thing for me is allowing the actor to make the character their own. That means occasionally changing lines, swapping words around, putting their perspective into the role. In Missing Link, I definitely gave room for the characters to evolve with the actors. That happens over time as well, because we record with them over a year and a half, on and off.

The film is very much on the side of science and evolution. Did you face any pushback at any point?

I didn’t. I think I’m on the side of reason. To me, reason equals empathy. Quite often the people with a scientific mind are more reasonable. Let’s leave it at that.