The Saskatchewan artist turns his eye to the future 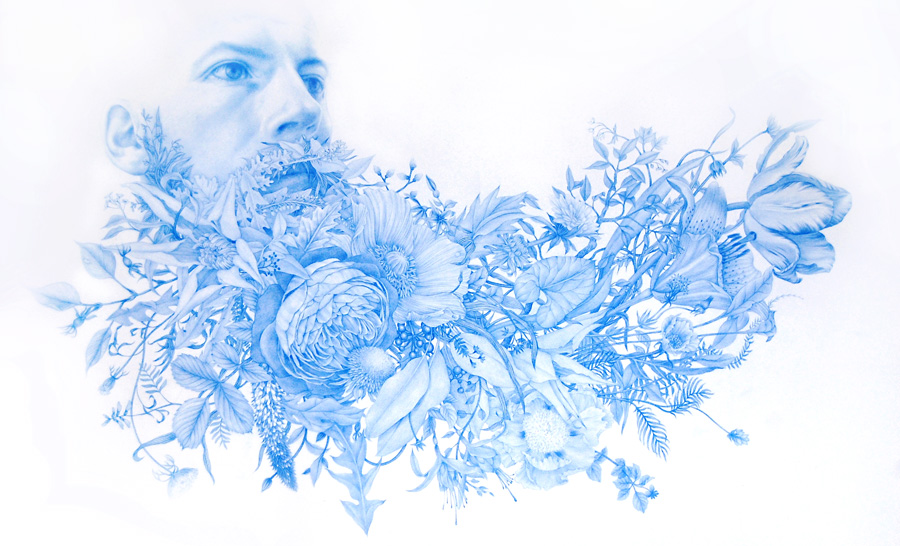 Take a peek at Saskatchewan artist Zachari Logan’s c.v. and many major cities leap out: New York, Paris, London, Berlin, Barcelona, Athens and more. In fact, he recently returned from Venice where he had a solo show of drawings that ran parallel to the Venice Biennale.

On his way back from Venice, Logan stopped in Ottawa for the opening of a group exhibit of drawings he’s in called Sex Life. At the same time, he has work in Off-Centre: Queer Contemporary Art in the Prairies that’s on at Regina’s Dunlop Gallery until Sept. 15. So yeah, he’s a busy guy.

Born and raised in Saskatoon, Logan has a BFA and MFA from the University of Saskatchewan. Currently a resident in Regina, he recently left a teaching job at the University of Regina to concentrate on his art full time.

As a rising artist in the digital era, Logan said in a recent interview at his Regina studio, he’s benefited from the international reach of the Internet. Compared to other art media, his drawings are relatively easy to ship too, so that’s helped in his dealings with international gallery owners and curators. Still, his career thus far has been impressive.

“When I was growing up there may have been romanticized notions of what an artist was, but not a lot of real-life examples,” says Logan. “So when I went to university I didn’t know what would happen. I just knew I was very passionate about art.”

Originally, Logan hadn’t intended to stay in Saskatchewan. But after completing his BFA, he struggled to find a Masters program.

“I applied to all these different places and outside of a conditional offer from Concordia that didn’t include any funding I wasn’t accepted,” he says. “The same thing happened the next year. So I was feeling a little dejected.”

Typically, students are advised to do their BFA and MFAs at different schools to meet as wide a range of faculty and students as possible. But ultimately Logan decided to return to the University of Saskatchewan.

“The great thing about the U of S was I got a full scholarship, so I just looked at it as a two-year residency,” he says. “But by the end of it I realized I hadn’t exhausted what I could learn from the faculty. I think I created a really challenging body of work.”

After graduating, Logan applied to the international art competition MFA Now. The jurors were American artist Judy Chicago, British critic Edward Lucie-Smith and a member the Saatchi family who own a prominent London gallery.

“I was one of the recipients of this big prize, so I flew to Miami where the art was exhibited,” says Logan. “At the same time in Paris, I’d applied to have my work in this drawing publication and they accepted it. Then a person who was opening a gallery in Paris for works on paper invited me to have a show where I got to work with French artist Sophie Calle.

“So all these wonderful opportunities just sort of happened.”

When I met with Logan, he was working on a suite of flower paintings for an upcoming Toronto exhibition. After that, he’s off to a ceramics residency at Medalta in preparation for an exhibition in Medicine Hat next summer.

Logan became interested in ceramics late in his schooling.

His initial inspiration, he says, came when he was in Athens for a show in 2011.

“I went to the Acropolis Museum and saw all these incredible earthenware objects. They were depictions of deities, I believe, and had been stored underground for religious reasons. What that did was protect the paint — they were polychrome.”

Struck by the vibrancy of the objects compared to typical Classical Greek art where the colours had weathered away over time, Logan began to play around with clay when he returned to Saskatoon. “I made some little plaques with plants on them,” he says. “I had no place to fire them. I just looked at them as sketches that I might even have destroyed at some point.”

Fate intervened, though, in the form of a studio visit from Calgary curator Wayne Baerwaldt.

“I’d put the plaques away,” Logan recalls. “But when I was in the house grabbing coffee for us, Wayne started rummaging through my studio and found them. He said ‘What’s this? These are great.’”

Baerwaldt arranged for Logan to take an 18-month ceramics residency at Alberta College of Art & Design.

“The thing that overlaps for me and is naturally appealing is that both media are formed by my hands,” Logan says. “So I just consider ceramics to be an extension of drawing in that the way I make them and think about form is very similar.”

Early in the residency, though, Logan discovered a key difference that he quickly embraced.

“I learned how when you put something in a kiln, it might not come out the way you expect. When I draw I have a lot of control, so that was really helpful. Now, I’m more adept at knowing what might happen in the kiln,” he says.

“But it’s still sort of a mystery.”

During our interview, Logan spoke about being raised Catholic and seeing canonical depictions of Christ and the martyred saints.

“There was always this weird disconnect between the violence being done to the body and the transcendence of the face,” he says. “It was a twisted mix, but it also had a strange eroticism.”

When Logan started art school, he worked with female friends and the female body.

Soon, though, he began working with the male body using images gathered from media.

“One of my professors, Alison Norlen, said maybe I should turn that gaze on myself,” Logan recounts. “It’s one thing to objectify another body, even when they’ve put themselves out there. But you do have different considerations when you’re thinking about your own body.”

Logan describes himself as being deeply affected by the Catholic iconography he’d seen as a boy. Later, as a student, he became obsessed with French Neoclassical painting by Delacroix, David and others at the Louvre.

“There, the male body is used as a political tool of domination whereas the female body is a passive object,” he says. “So I was trying to mix those visual cues and present the male body as more vulnerable, more real.”

The most dramatic way Logan shows those qualities in his self-portraits is through nudity. But the poses and gestures he adopts, with their mix of whimsy, anxiety and grace, also convey a sense of intimacy.

Similar to the French neoclassical paintings, they carry a political message too.

“The single and multiple figure portraits are really about visibility, and my relationship to Saskatchewan,” says Logan. “I think there are a lot of younger queer artists working with their bodies now because of that very fact — that they don’t see themselves reflected.”

During his travels, Logan often takes time to photograph local flora and fauna. Initially, the plants and animals served as fringe detail in the portraits. But then he began to incorporate them into the actual figures.

One dichotomy he addresses is that homosexuality is somehow “unnatural”, and therefore an abomination. Among hardcore Christians that view is still strongly held, but other cultures throughout history have been much more open to same sex relationships. Plenty of evidence exists, too, of homosexuality in non-human animal species.

A second dichotomy relates to the environment, and how, again in a Judeo-Christian context, humanity has long regarded itself as apart from nature.

“Essentially, I’ve come to the understanding we are the garden, we’re not separate from it,” says Logan. “With the conversation around environmentalism, what we’re really doing is destroying ourselves. The world will continue beyond our existence, but it will be very horrible for us.”

While visually seductive, Logan’s drawings, through their hybrid human/animal/plant composition, and sometimes velvety black night-time setting with hints of homophobic violence and environmental collapse, do have an undercurrent of menace.

“I’m a huge fan of horror films, and I feel like there’s a great renaissance happening now with directors such as Jordan Peele and Ari Astor,” he says. “My favourite movie of all time is The Shining. I feel that to make a really good horror movie it has to be drenched in beauty.”