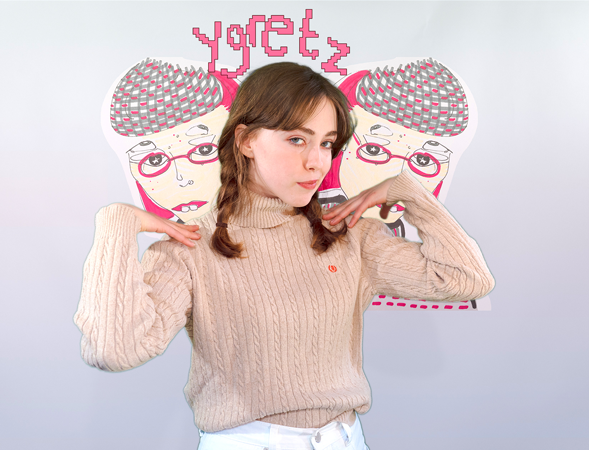 Saskatchewan artist ygretz recently released her first full-length album, Mel Wide. She wrote, recorded, produced and mixed it and also edited the music video for the single “Air” which you can check out on YouTube. Live, ygretz plays electric guitar and uses a sampler for beats and other instruments. She also does animation, and projects her artwork during the performance. Here are six songs she’s keen on. /Gregory Beatty

This song was the track on my Tumblr page in 2012. It reminds me of being a tween in my room making Garageband beats and playing World of Warcraft. I remember this being a really important song for me because of how escapist it is. The video is really cool too. It’s very naturalist, yet it’s computer generated. Bjork is so good at that contrast.

I love T. Rex. This is such a great opening track. It just invites you in. I love the way Marc Bolan handled energy: he held back so efficiently. This song seems like it’s in cruise control.

I am obsessed with the soundtracks Angelo Badalamenti has done for David Lynch films. That includes the little dark room in the Lynchian dimension that they carved out for this record. This song is like floating on a moonlit lake.

This was one of the first cover songs I chose and performed to an audience on my own. St. Vincent hit me at a very impressionable age. She is like this weird, consoling godmother of my adolescence. This song is like sliding into a hot tub on a cool night.

Growing up, whenever my dad would put on Al in the car or at home I always noticed how fast the energy would change — it’s the ultimate mood. Everything melts away.

I was a tween during the Pink Floyd renaissance. This track really stuck with me. It’s just so transcendental and magical.