Danger On The Job

Saskatchewan is a leader in workplace injuries and deaths. Here are some ideas to fix that 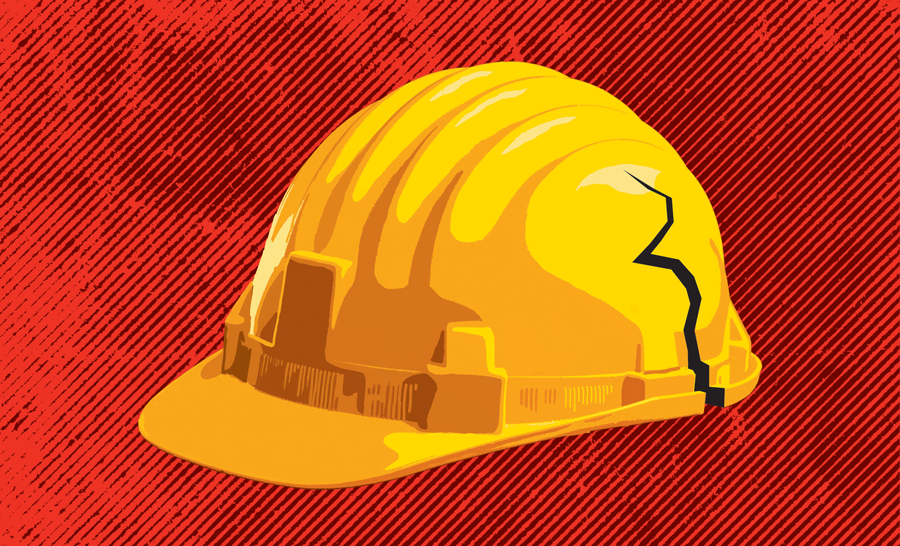 Saskatchewan has long had a notoriously poor record for workplace safety. Year after year, we’re in the bottom tier of provinces and territories in terms of worker deaths and serious injuries.

Of course, there are excuses. One common one is our rural heritage and “can do” attitude that makes us okay with “improvising” to get a job done. It sounds cute and folksy, and many Saskatchewanians might even consider it a badge of honour.

But when workers take shortcuts and a workplace accident happens, the consequences can be devastating.

In a typical year, Saskatchewan averages 30 workplace fatalities. The statistics include workers who die from traceable workplace causes (asbestos exposure, for example) so the fatalities aren’t all jobsite related. Still, it’s a lot of dead workers. And there were dramatically more in 2018, when we recorded 48 workplace fatalities.

Alarmed by that jump, the Saskatchewan Federation of Labour is holding an occupational health and safety conference in Saskatoon Sept. 11–13. For SFL President Lori Johb, who replaced long-time SFL head Larry Hubich last fall, workplace safety is a top concern.

“When I ran for the position, one of my priorities was occupational health and safety and restarting the conversation around ensuring workers head home from work safe and healthy every day,” she says. “Last year was a horrific year. The fatalities increased by over 60 per cent, which is really unacceptable.”

When the statistics were released last December, the SFL requested a sit-down with the Saskatchewan Party government and Workers Compensation Board to address the crisis.

“While it took way too long, we did finally have a roundtable discussion at the end of May,” says Johb. “And we have the bones now for a fatalities and serious injuries strategy that I believe will be rolled out in early September.”

The strategy comes on the heels of the government’s 2014 move to consolidate 12 pieces of labour legislation into The Saskatchewan Employment Act. One rationale was to update the rules around employee-employer relationships to better reflect the modern workplace.

Most workers these days, labour analysts say, can expect to switch jobs and even careers several times in their working life. The ever-accelerating pace of technological change is one driver for that, so workers are constantly having to undergo training and work with new equipment.

To reduce inventory costs, many companies follow a “just in time” production model now, which puts added pressure on supervisors and workers to meet deadlines. Excessive reliance on overtime, the financial stress workers experience when they moonlight or work multiple part-time jobs, national and international collaboration between general and sub-contractors on big job sites, all add to the complexity of the modern work environment.

“We have to recognize that the workplace and the dynamic of the workforce have changed in Saskatchewan in recent years,” says Johb. “And we need to do a better job of ensuring people have proper training and orientation on the job site and that workers have accessible information on the laws that are there to protect their safety.”

Two areas the SFL is currently focussed on are the growing number of young workers, and workers with immigrant backgrounds.

“We got a one-time grant from WCB to work with a group of University of Regina students who came to us with their concerns,” says Johb. “English isn’t their first language, and they had a lot of questions around occupational health and safety and labour standards.

“We have a program called Ready for Work that is delivered in high schools, and it talks about those issues,” she adds. “It’s been adapted to meet the needs of newcomers to Canada. People will be able to go online and see the information translated so they’ll be able to properly access it and stay safe at work.”

Under The Saskatchewan Employment Act, workers have three fundamental rights to promote safety: the right to know hazards at work and how to control them; the right to participate in identifying and managing workplace hazards; and the right to refuse work they believe is unusually dangerous.

Those rights are fine in theory. But in practice, Johb questions whether they’re being properly recognized by employers.

“What we’re finding when we talk to workers, especially in workplaces in big companies where fatalities and serious injuries are a real issue, is that a big part of the problem is intimidation by supervisors and the employer.

“‘If you don’t do this, I’ll find someone else who will’ is the message workers get,” Johb says. “That means people have to worry about losing their job if they refuse to do work that’s unsafe. So we think it’s important that supervisors and employers understand these rights and recognize they are the law.”

To enhance workplace safety, Johb would like to see the government reinstate the requirement that all occupational health and safety committees submit minutes after they meet.

“What I’ve been hearing across the province is that now that the requirement’s no longer there, there’s no accountability and meetings are not even happening. So we’re pushing hard to get that done.”

The SFL would also like to see the government support higher fines when safety infractions lead to a workplace death or injury. To the government’s credit, it included higher penalties in The Saskatchewan Employment Act. But they’ve been slow to kick in.

“Fines are gradually going higher but if they hit an employer with a million-dollar fine, that would get some attention because I’m afraid for some of these big corporations it’s a budget issue where a smaller fine is just the cost of doing business,” says Johb.

Criminal law is another potential tool that could be used to protect workers, Johb suggests.

“I think our police services need to be trained on how to conduct a proper workplace investigation so if there is a serious injury or fatality they can investigate it as a criminal incident. In Saskatchewan, we’re not there yet. But I believe there is conversation around the idea, we just need to get the wheels moving a little faster.”

To further boost accountability, the SFL would also like to see all incident reports and investigations published in an accessible online format. Extending the three rights to give workers the right to refuse unsafe work on behalf of another worker is another change the SFL advocates. That would help shield younger, more vulnerable workers from workplace intimidation.

Having met with the government and WCB in May, Johb is optimistic the new fatalities and serious injuries strategy will help improve safety for Saskatchewan workers.

“I’m happy to say that we’ve had really good results working with the WCB on labour relations and workplace safety,” she says. “We’ve definitely made some headway in the last few months and I’m really proud of that work.

“They came to the table willingly and were very open to working with us. It’s something we need to recognize, because workers can’t do this alone.”

“There’s a feeling out there that our three worker rights have become an illusion. To me, that’s very profound, and correct. And we need to do what we can to make sure that’s not the case and that the rights are respected and upheld.”