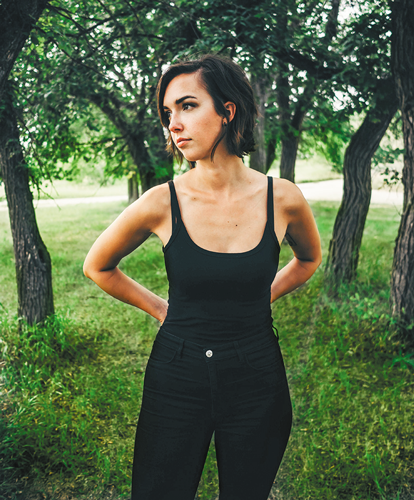 Annora is a Regina-born musician who has released several singles and is currently working on her first EP. “As a musician, I always describe myself as a storyteller first,” she says. “In choosing my six songs, it struck me that in many ways they’ve been the storytellers of my own life.” /Gregory Beatty

When I was growing up, I had a secret desire to sing. Instead, I sat behind a piano, playing classical pieces. My first opportunity to live out my dream came in high school jazz choir. I learned so much about performing — all while trying to sound as smooth as Nina Simone. It’s something I continually strive for but never expect to reach.

As a straight A high school kid well versed in Harry Potter, my opportunities for rebellion were limited. Joan Jett will forever have my gratitude for lending me the attitude of rebellion without needing to pursue it.

This artist came to me when I was living away from home for the first time at 19, having left for school in Europe. I was surprised to learn how distance from what you know can strip away your identity if you let it. His music always seems to bring me home.

It’s an ironic truth in my life that leaving home always brings me closer to it through music. It took me moving three provinces over and living in Montreal to discover this Saskatchewan gem. The entire album is masterful, but this song is my favourite.

I’m often not much for love songs. When I hear one I feel like I’m borrowing from someone else’s love story. But this one speaks to my soul, perfectly capturing the clandestine magnetism I look for.

My list of meaningful songs would be incomplete without my girl Lights. I’ve been going to her shows for over ten years. Her tour shirts make up 30 per cent of my wardrobe. Choosing my all-time favourite song is impossible. But my favourite one from her most recent explosion of genius, which included two musical albums and a comic book of her original art, is “Fight Club”.