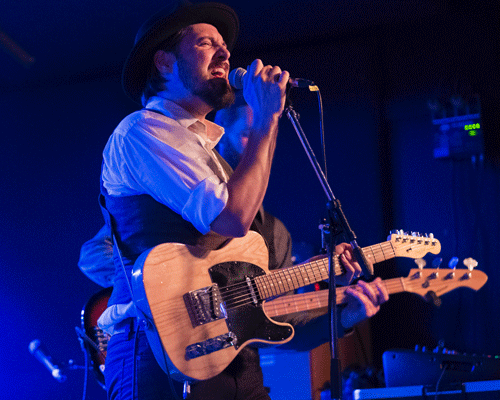 Kris is one-fifth of the Saskatoon electric-folk band Oscar’s Hollow. He handles guitar and vocals, and his bandmates include Lee Harris (guitar, vocals), Darryl Dozlaw (keys, guitar and other instruments, vocals), Kurtis Burnett (drums, vocals) and Byron Shaw (bass). The group released a self-titled EP last fall and on Oct. 18 they will celebrate their second EP, Now Playing with a show at The Bassment. Here are six songs Kris considers favourites. /Gregory Beatty

When coming up with arrangements for songs, I always think “What would The Band do?” This song is a perfect example of how five musicians can share space in a song.  From the guitar flourishes to the piano and organ accents to the harmonies and rhythm section, everything fits perfectly.

I’m not sure something is truly beautiful unless it has a little grit. If I could sound like anyone in the world, it would be Tom Waits. Having Keith Richards on the track is definitely a bonus.

It doesn’t matter how many times I listen to this song and where I am when I hear it, I have to get up and dance.

I’m a sucker for songs that cover a vast dynamic range and go smoothly from quiet to loud and back again.

Joni is a true national treasure. I’m not sure if I’ve heard anyone turn a phrase like her. This track definitely shows off her fun and playful side.

Anytime I start taking music too seriously, I know it’s time to listen to Ween. I’ve seen these guys live several times. They’re some of the most talented musicians I’ve ever seen, but I’m just as impressed by how silly they are and how much fun they have.