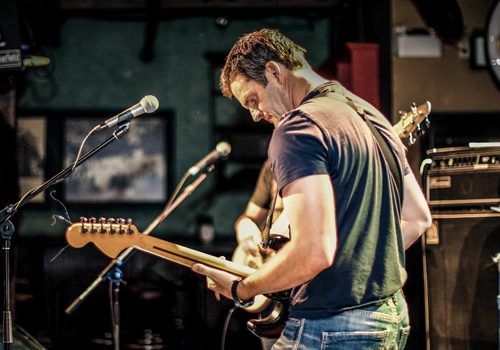 James Irving is the frontman for Regina’s venerable rock outfit Nickeltree. Nickeltree’s been shaking Saskatchewan since 1998, and the group will release their eighth studio album in early 2020. As for Irving, he’s got a solo gig on Sunday Nov. 10 at Village Guitar and Amp. Check it out! Meanwhile, because that’s what we do in this column, here are six of his favourite songs. /Gregory Beatty

I really got into CCR when I was in university and starting to write my own songs. This epitomizes John Fogerty’s songwriting style: a simple, catchy, repeating guitar riff and lyrics that make you feel like you were dropped in the middle of a Louisiana swamp.

When I was in my late 20s I read Jon Krakauer’s Into The Wild. It reminded me of how I felt at age 19 — restless, distanced from some aspects of modern society and just wanting to escape, much like the book’s central character Chris McCandless. Eddy Vedder’s soundtrack for the movie was incredible. The combination of his trademark voice and haunting mandolin on this version of Jerry Hannon’s original hit me deep.

Growing up in the country didn’t mean you had to listen to country music only. Mellencamp’s music took the pitchfork out of the farmer’s hands and replaced it with an electric guitar!

Liked Nirvana when they first came out, loved them after I heard their unplugged album. Biggest band on the planet and they play a set of predominately cover songs instead of their hits live on MTV? A big “fuck you” to the industry. Now that’s rock and roll!

If you’re Canadian, then The Tragically Hip had an impact on your life whether you liked it or not. They made Canadian rock ’n’ roll cool and helped de-Americanize our way of thinking. A huge influence on my lyric writing. Not one of the Hip’s better-known songs, but one you can get lost in for days.

One of the best post grunge bands coming out of the late ’90s. This album is solid from start to finish. John Wozniak is one of my favourite quirky songwriters and nobody can write songs about the opium trade, pigeon farms, and alien abduction like he can.