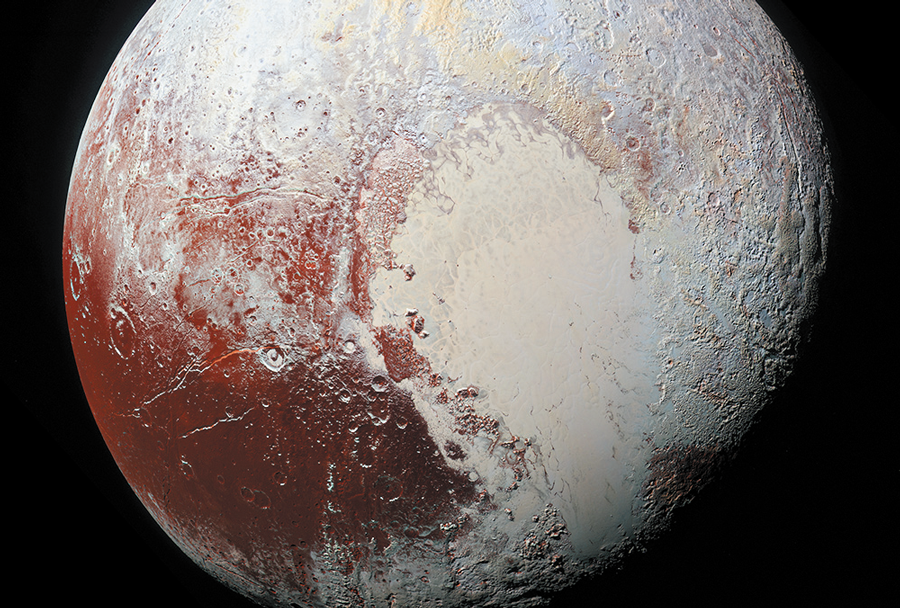 Thanks to four centuries of telescopic study, dozens of space probes to different planets, and six flesh-and-blood visits to the Moon, we have a pretty good understanding of our immediate solar system.

But beyond the eighth planet Neptune things start to get murky — and kind of spooky, too. In honour of Halloween, let’s take a trip into the great unknown. To guide us we have URegina astronomer Samantha Lawler, who just happens to specialize in that region of our solar system.

Neptune is 30 astronomical units (AU) from the Sun, which means it’s 30 times further out than Earth. Beyond Neptune is the Kuiper Belt, which ranges between 30 and 50 AU, and is composed of many thousands of asteroid-like objects.

“We know of about 3000 objects,” says Lawler. “Because of the different sizes we’ve found, we think there are about 400,000 objects bigger than 100 km. So it’s way larger than the asteroid belt between Mars and Jupiter.”

Both belts consist of large chunks of rock that never coalesced to form a planet. Unlike the asteroid belt, though, objects in the Kuiper Belt (also known as Trans-Neptunian Objects) have highly eccentric and tilted orbits. That makes their origin a real mystery, says Lawler.

“When we look at TNOs, their orbits are telling us a story of how they’ve been moved around,” she says. “And the best explanation we’ve come up with is that Neptune moved quite a bit. It could’ve happened in two ways. One involves a slow migration where Neptune, over time, moved out, scooping up and scattering TNOs like a snow plow.

“The second way would be where the outer planets were jumping around a fair bit, and jostling each other, so instead of smoothly pushing the Kuiper Belt out they destroyed it over millions of years.”

Under the latter model, astronomers haven’t ruled out the possibility that a fifth gas/ice giant once existed alongside Jupiter, Saturn, Uranus and Neptune. But through the combined effect of their gravity, it ended up being sling-shotted out of the solar system!

Hades In The House

The Kuiper Belt is named after Dutch-American astronomer Gerard Kuiper who suggested in 1951 that some comets that visit the inner solar system might come from there. But the first Trans-Neptunian Objects was actually discovered by Clyde Tombaugh in 1930. It was no fluke, either. Rather, it was the result of a search prompted by tiny wobbles in Neptune’s orbit that suggested something (fabled in media reports as Planet X) was exerting gravitational pull on it.

“This was back when they used photographic plates,” says Lawler. “They would point the telescope at a patch of sky, expose a plate and develop it. Then a week later, they would return to the same patch of sky, take another plate, then blink back and forth between them to see if anything moved.”

If something did move, that meant it wasn’t a star, as they were fixed in the sky. And after several months of painstaking study at Lowell Observatory in Arizona, Tombaugh, then 23, met with success. At the suggestion of a British school girl, the object was named Pluto after the Greek god of the Underworld because of its distant and dark location.

While Pluto was originally celebrated as a planet, it was evident early on it wasn’t in the same class as other planets. It did have five moons — Charon being the largest. But at two-thirds the size of Earth’s Moon, Pluto was extremely small. Unlike other planets, it also had a wildly eccentric and tilted orbit that ranged between 29 and 49 AU.

Pluto’s planetary cred took another hit in 1992 when a second large object, Albion, was discovered in the region. Then in 2006, CalTech astronomer Mike Brown found Eris. “From the first images, they thought Eris was slightly bigger than Pluto,” says Lawler. “So this sparked a crisis, because if Pluto is a planet does that mean Eris is a planet? Or should Pluto not be a planet?”

After heated debate, the International Astronomical Union demoted Pluto and Eris to dwarf planet status. “That means they haven’t cleared their orbits of similarly sized objects, but they’re big enough to have pulled themselves into a round shape,” says Lawler. “There are about 10 of those known in the Kuiper Belt.”

Pluto may have been scorned as a planet, but it totally wowed scientists when New Horizons flew by in July 2015, says Lawler.

“New Horizons took absolutely beautiful and stunning images of Pluto. Photos of the surface revealed smooth glaciers made of nitrogen ice and mountains made of water ice. As the flyby ended, Pluto was backlit by the Sun, and New Horizons gave us a great view of its atmosphere. So Pluto is a real world, but it’s not a planet.”

“There was no hard evidence. But a lot of astronomers and geologists think there’s the possibility of liquid water beneath Pluto’s surface.”

Were that true, Pluto would join Saturn’s moons Enceladus and Titan, Jupiter’s moons Europa, Ganymede and Callisto, and Neptune’s moon Triton, as possible candidates to harbour life. They are all known (or suspected) to have subsurface liquid water too.

So yeah, Pluto is definitely cool. And hopefully we’ll return soon to study it in greater detail.

New Horizons was launched in September 2005, so it took almost 10 years to reach Pluto. Even before the flyby, astronomers were searching for another TNO beyond Pluto that the probe might be able to reach with its limited fuel supply.

“The challenge to doing another flyby was that Pluto is currently in what astronomers call the galactic avoidance zone,” says Lawler. “So to find something else to fly past they had to search in an incredibly dense field of stars. But they got emergency time on the Hubble Telescope and were able to find a target.”

“When New Horizons flew past in January 2019, what they found looked like a red snowman. But when they analyzed the data more carefully, they realized that instead of being two balls like a regular snowman, it was actually like two pancakes stuck together.

“It seems when the TNO came together, it was spinning very rapidly, and that’s what made the pancake shape — maybe,” she says. “So are all small TNOs like this? Or is this a fluke, and we just happened to fly by it?”

We’re about halfway through the Kuiper Belt now, and the biggest mystery awaits. It too involves astronomer Mike Brown (and CalTech colleague Konstantin Batygin). Investigating six distant TNOs which seemed to be orbiting in synch with each other, they proposed in 2016 that one possible explanation was the presence of a ninth planet.

As hypothesized by Brown and Batygin, Planet Nine is around 10 times Earth’s size, and has a highly elliptical orbit between 400 and 800 AU from the Sun.

The search for Planet Nine is ongoing, but there’s no consensus among astronomers that it exists, says Lawler.

One major concern for OSSOS with Brown and Batygin’s proposal, says Lawler, is observation bias.

“Finding TNOs is really hard,” says Lawler. “We’re seeing them through reflected sunlight, so as they move further away they get fainter very quickly. And they’re moving much slower then, too. So you are biased to detect them at their closest point to Earth.”

Other biases exist too. With where the Milky Way is in the sky, for instance, it’s very difficult to spot tiny, dim TNOs.

So astronomers generally don’t look there.

Even the geographic location of the telescope can influence what areas of the sky astronomers study. OSSOS used the Canada-France-Hawaii telescope at Mauna Kea.

“It has a huge camera, so it’s great for covering large areas of the sky,” says Lawler. “But in winter, it’s cloudy and rainy there, so we didn’t study the sky in that direction.”

Using the same blink method as Tombaugh in 1930, except done by computer, OSSOS took numerous photos of two different patches of sky over five months, discovering hundreds of previously unknown TNOs. Then they ran orbital simulations, and projected the potential impact of Planet Nine, along with other factors such as galactic tides from the pull of nearby stars.

“With our observations we were able to test for the real distribution of TNOs and not the biased distribution that [Brown and Batygin] relied on,” says Lawler.

“We also looked at those six TNOs and let them orbit forward millions of years. If Planet Nine was actually constraining them, they should all stay in the same area. But very quickly, we found the orbits were smeared all over the place. So it’s not even able to constrain the six TNOs it’s supposed to constrain.”

Lawler and her OSSOS colleagues hope to secure time on another large telescope to continue their research, but for now they’re in the Planet Nein camp. When we spoke, though, she’d just received word of a new development in the controversy.

“Someone wrote a paper suggesting Planet Nine could actually be a primordial black hole, which is a tiny black hole left over from the beginning of the universe,” she says.

Yeah, that’s the Kuiper Belt for you. Plenty of treats, but more than a few tricks too. Happy Halloween everyone.