They’re Inside the House! 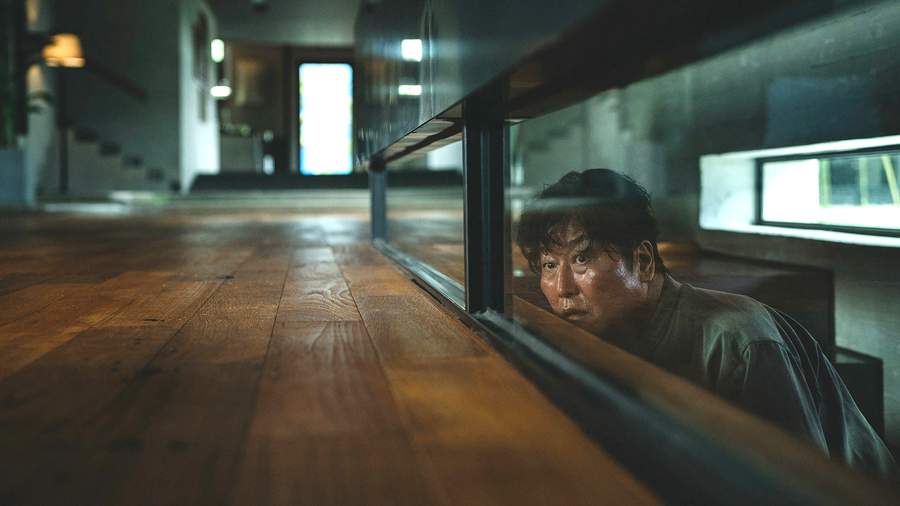 Few accommodations are more depressing than basement suites. Most of the time they’re dark. They’re often damp. On top of that, knowing that you’re paying actual homeowners for the privilege of living in their basement is grim.

Maybe this is why we’re in the Kim family’s corner right from the start of Parasite. A clan of four sharing limited space, the Kims must hustle for basics like WiFi or, well, food. They’re likeable not because we pity them (like the characters in, say, Hirokazu Kore-eda’s Shoplifters), but because they’re so good at gaming the system.

When a tutoring position with a well-off family — the Parks — opens up, the Kims work together to make sure young Kim Ki-woo gets the gig. In turn, Ki-woo provides key information that gets every member of the family hired by the Parks.

Up to this point, Parasite is a delightful crowd-pleaser with some social critique. But if you know anything about writer/director Bong Joon-ho, you’re aware his characters always pay a price for their transgressions.

Bong, who has become something of an art-household name in North America thanks to Okja and Snowpiercer, likes his satire bloody. Sure, we’re cheering for the Kims, but once they’ve got a taste of the good life, they’re not giving it away.

The second half is full of twists I won’t spoil and the last 30 minutes is more intense than all this summer’s blockbusters combined. None of the rug-pulls are for kicks, either — Parasite is true to itself even when it stops being palatable. In Bong’s world, people will take advantage of others and their callousness grows proportionally to their misplaced sense of security.

When Parasite’s darker nature emerges the film never feels cathartic or fair, as if one of the sides ‘had it coming’. Every act of violence registers. The true villain — the system that created the economic chasm between the Parks and the Kims — is the only thing that gets through unscathed.

I could count on the fingers of one hand the filmmakers who can juggle multiple genres in one movie. It hasn’t always worked for Bong (Okja is crazy uneven), but in Parasite it seems natural. As usual, the filmmaker relies on Song Kang-ho (his go-to actor since Memories of Murder). As the father going along with the scheme whose class consciousness bubbles to the surface, Song does a superb job combining good-natured and resentful.

It’s worth noting that for a film with subtitles, Parasite is doing brisk business outside of South Korea and in all likelihood it’ll break out of the foreign language category at the Oscars. Could be the Palme d’Or it won at Cannes, or maybe Parasite just taps into a potent zeitgeist of working class anger at the gap between the world’s rich and the rest of us.

Bong Joon-ho is a new generation’s Ken Loach. Who knew?