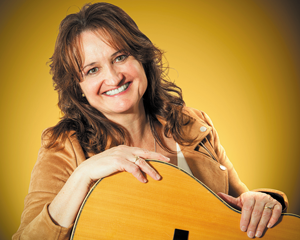 Eileen is a well-known Saskatchewan folk artist. On Dec. 8, she’ll be a guest at the Eclipse Chorus concert at Saskatoon’s Broadway Theatre. “There are so many great songs that mean so much,” she says about the challenge of picking six favourites for this column. “To narrow it down, I decided to go with songs that had a connection to life’s adventures.” /Gregory Beatty

I learned this song with local Celtic band Siamsa many years ago. The start of a wonderful adventure, it helped me find the confidence to step up to the mic and follow a dream. It’s been on my set list for over 25 years.

I first heard this song performed by Mary Black. A few years later, I had the pleasure of meeting Ron Hynes who told me the story behind it. From my early soccer days and jamming with the team from NFLD, to late-night sessions after gigs where many musical friendships were begun, to eventually touring with Mary Black herself, this song is a thread connecting many adventures.

A summer highlight is spending a week exploring the Churchill River with four adventurous friends. After a long day of paddling and portaging, we set up camp and enjoy a feast — steak, fish tacos, walleye chowder and Irish soda bread. Of course, my favourite part is sitting around the campfire sharing songs and stories. We’ve adopted this song as our anthem and listen to it on repeat on the long trip there and back.

I’ve been obsessing over this lovely melody by my good friend, Jesse, since it was released. It instantly cures road-rage, reduces stress, and brings to mind all that is good in the world. Jesse and I have shared many wonderful musical adventures over the years.

Doesn’t matter where I am when I hear this: I. Must. Dance. Monty P. Marshall (Mudd Bros, Hot Rod Hullabaloo) knocks this one out of the park.

Greg is the most creative person I know. Musically, he’s probably most comfortable fronting a rock band, but this heartfelt ballad has long been a favourite of mine. It’s about choosing “the road less travelled.” That’s really the spirit of adventure.