Pluck of the Irish

De Niro! Pacino! Pesci! Scorsese gets the gang back together 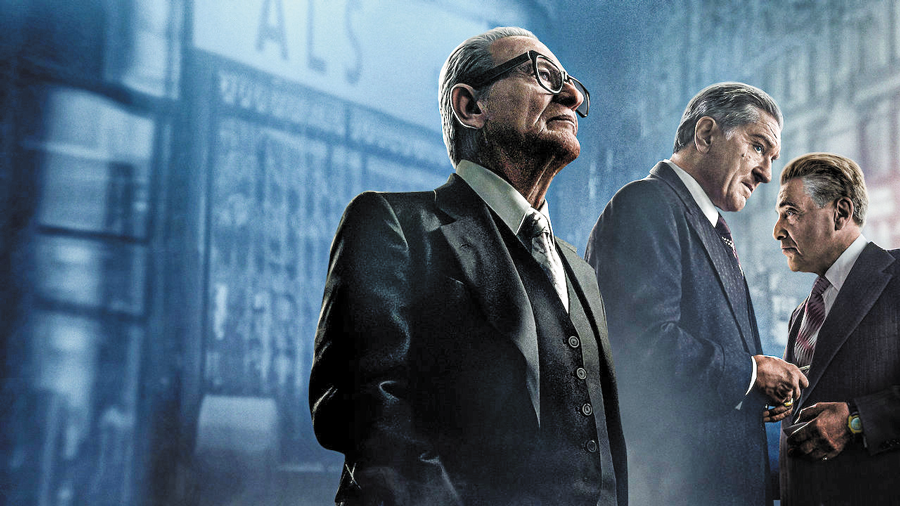 A problem three-hour-plus movies often face (outside of straining your bladder) is that the film’s reason-for-being gets lost among the minutia. At three hours and a half, The Irishman is remarkable from many angles, but its overall message isn’t that clear. Is it perhaps that moral relativism and karma go together like gangster movies and Italian stereotypes? There’s no upside to blind loyalty? Pride can get you killed?

In a way, it doesn’t matter that much. If movies were food, The Irishman would be a seven course meal (Marvel films would be fast food and Adam Sandler, brussels sprouts with cyanide glaze).

We first meet Frank Sheeran (Robert De Niro) as an old man at a retirement home. He speaks straight to the camera and describes his colourful past just like Abe Simpson would, in detail, but likely exaggerating. Sheeran doesn’t dodge the less savory corners of his story, but he has excuses for his most questionable actions ready to go.

Initially in the meat transportation business, Frank makes an extra buck by stealing the merchandising he’s moving. His entrepreneurship and lack of scruples get him in good side with Russell Bufalino (a subdued Joe Pesci), the boss of Pennsylvania’s most powerful crime organization.

Sheeran is a good soldier: arson, theft, the odd murder, he’s game for anything.

His “house-painting” skills make him the ideal candidate to work as bodyguard/consigliere for Jimmy Hoffa (Al Pacino), the leader of the teamsters until 1971. Sheeran and Hoffa are practical men with little patience for fools or showboating and the two become buddies. Their friendship would be challenged by the changing tides of union politics: Once allies, Hoffa and the mob slowly drift apart. Frank’s willingness to toe the line without making waves gets him right in the middle of the conflict, forcing him to make the moral choices he avoided through his entire life.

The temptation to compare The Irishman to the other Martin Scorsese mob movies is unavoidable. The thrill of the heist and the stylized killings of Casino and GoodFellas are nowhere to be found. Every act of violence in The Irishman is mournful, loaded with pathos. Scorsese’s focus is on the man whose soul has been eroded by a life of crime, yet fails to acknowledge it.

Robert De Niro brings texture to what’s basically a “straight man” role. Next to Pacino, De Niro seems a model of restraint, yet we can see his mind always at work. He can read every scenario, but he’s pathologically incapable of introspection. Good short term, deadly in the long run.

Joe Pesci is towering as Bufalino. We’ve been operating under the misapprehension Pesci’s range is limited to “loud and manic”. Here, he’s as restrained as they come, but every gesture tells a story. His performance is so good, it makes you regret he has only made three movies in 20 years.

While focusing on the de-aging of the main actors would be a mistake, it’s worth mentioning that the job is subtle and most of the time hard to notice (it takes a few minutes to get used to De Niro’s blue eyes though). The one feat Scorsese fails to accomplish is making us empathize with any of these terrible people. Then again, who wants another Kundun?