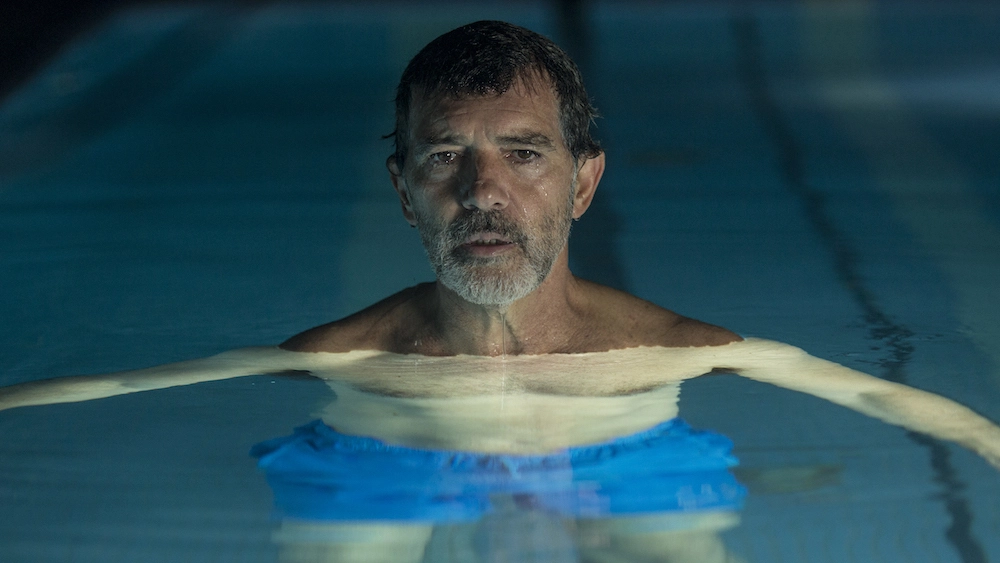 Pedro Almodóvar’s career can be divided in three periods. His early work, wild and mischievous. His mature years, insightful and in touch with his feminine side. Recent movies, though, have been more miss than hit.  His foray in comedy, I’m So Excited, was straight-up terrible, and his attempt to go back to his heyday (Julieta) didn’t mesh with modern audiences or critics.

From his time in the wilderness, Almodóvar has emerged with a stunner. Heavily introspective, Pain and Glory is about aging and finding a reason to go on when your body fails and inspiration is lacking.

Salvador Mallo (Antonio Banderas in a career-defining performance), the foremost Spanish filmmaker, has been away from the spotlight for a few years. A variety of ailments have stalled his creative juices, but his unwillingness to mine his past for material is the main culprit. There is too much pain buried and too many ghosts to deal with.

A retrospective of his work gets him in touch with the lead of one of his movies, Alberto (Asier Etxeandia). Actor and director parted ways acrimoniously and the wounds are still open, but so is their artistic connection. Alberto also introduces Salvador to recreational heroin use, which he embraces a bit too enthusiastically.

The fraught relationship opens a door to the realization that for all his peccadilloes and pig-headedness, Mallo has been a force for good and the self-flagellation is somewhat unjustified.

Mallo’s story is regularly informed by flashbacks of his childhood. Born to an impoverished family in a minuscule town, Salvador develops a close relationship with his hard-working, no-nonsense mother (Penélope Cruz). He’s positive he let her down when he left for Madrid looking for an artistic outlet and sexual liberation, a belief that has followed him since.

Pain and Glory isn’t a direct autobiography, but there’s a connection between Almodóvar and Salvador and it’s not just the hair. The auteur and Banderas had a lengthy fall out when the Spanish heartthrob moved across the pond to pursue a career in Hollywood. Antonio was somewhat successful, but never as good as when he collaborated with the man who discovered him. His performance here was rewarded in Cannes and the Oscars should take notice.

Almodóvar dares to try new tools in his storytelling. Using CGI, the writer/director explores the main character’s suffering body and how it has determined his artistic life. An efficient (if not elegant) way to get through exposition.

Unsurprisingly, Pain and Glory is wonderfully written. Almodóvar has the rare gift of making florid, poetic dialogue sound natural (Terrence Malick should take note) and his latest has some doozies: “The nights that coincide several pains, those nights I believe in God and I pray to him.”

The presence of actors from previous films, Cecilia Roth, Julieta Serrano, underlines the movie’s message: the past always comes back, the good and the bad.

Unlike, say, The Irishman, Pain and Glory does feel like a swan song. Not trying to send Pedro to an early grave (in fact, the movie suggests a new beginning). But if this was goodbye, it would be a flawless one.