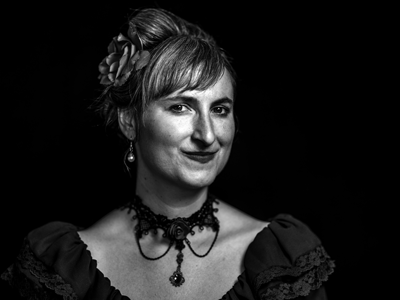 Eliza describes herself as a banjo player from Saskatoon. After years of touring and performing, she says, she spends most of her time now working to bring music programming to under-served Saskatchewan communities. To help fund that work, she develops grant proposals and organizes an annual festival called Doylefest.

“The order of these songs is my music story,” she says. “It’s the story of the journey that opened up my musicianship and banjo playing. It was the journey that brought me to where I am today.” /Gregory Beatty

I first saw Old Man Luedecke play in Halifax in 2002, when I was travelling across Canada busking on the streets and learning how to play the banjo. I had never seen a younger person playing the banjo, it changed where I saw myself in the musical conversation.

Following the road trip across Canada, I returned to Saskatoon. I continued busking and playing open stages, and later that year met an amazing duo: Kamila Martel and Melissa Nygren. We would become The Cracker Cats, which is the first band I was ever a part of. This recording still blows me away, listening to the 22-year-old version of myself and hearing what had developed in such a short time for me.

During this era in Saskatoon, The Sadies were, and still are, musical icons. They would roll into Saskatoon and take showmanship, songwriting and musicianship to a whole new level.

When I quit my teaching job in Swift Current in 2015, I took a road trip south with my friend Kiera Dall’Osto. She is a gifted singer and songwriter, and when our car randomly broke down in Nashville, we ended up living there for three months. It was one of the most amazing, enriching and developmental times in my musical life.

This was my theme song while I was living in Nashville, good ol’ traditional honky tonk. Life is an amazing opportunity, take chances and ownership, and cheers to everyone who has supported me along the way! Thanks. Thanks a lot!