Popetrait of a Young Francais 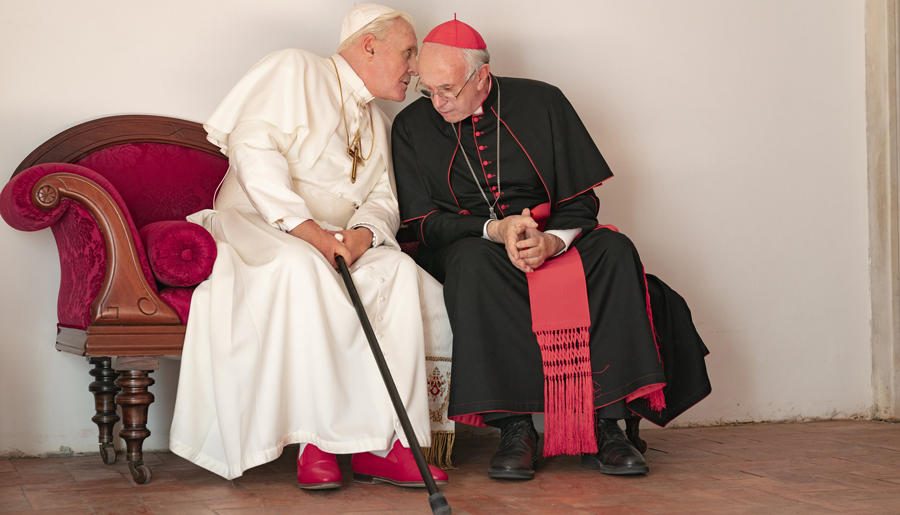 There’s no good reason The Two Popes should be this much fun — I mean, the elevator pitch is “two old men debate Catholicism’s fate”.

Leave it to director Fernando Meirelles (City of God, The Constant Gardener) and consummate pros like Anthony Hopkins and Jonathan Pryce to make it both dynamic and thought-provoking, and to make a case for religion in a time when many of the world’s problems can be pinned on zealotry.

In fairness, the old men I was referring to are the two most fascinating individuals to emerge from the Church in the last half century: Joseph Ratzinger and Jorge Bergoglio (it’s hoar-hey, not “George”). We meet them when Ratzinger (Hopkins) has just become Pope Benedict and Cardinal Bergoglio (Pryce) is establishing himself as the thorn in his side. While the former is a traditionalist who believes the Catholic Church must remain sturdy in the face of change, the latter believes the growing distance between the shepherd and his flock must be addressed.

The Two Popes revolves mostly around two fictitious encounters between the two men. One in the beginning of Pope Benedict’s pontificate and another towards the end, when he’s mulling his resignation. In between, we see flashbacks of a young Bergoglio (Juan Minujin) finding his way in a country in turmoil. Originally a man of science engaged to a beautiful woman, Jorge receives the proverbial signal from the heavens and embraces the cloth.

His time as a priest wouldn’t be an easy one. With Argentina going from one military junta to another, his efforts to protect his Jesuit order brand him a collaborationist — a perception that hasn’t fully vanished to this day.

I had the opportunity to interview the man who portrays the young Jorge Bergoglio — Juan Minujin — at the Toronto Film Festival. An Argentinian mainstay who got a taste of Hollywood doing Focus with Will Smith, Minujin has yet to meet his co-star Anthony Hopkins, but he’s certain of one thing: Jonathan Pryce has mastered the art of playing a Porteño (a Buenos Aires native).

How was it to be directed by Fernando Meirelles? Does his style suit you?

We improvised a lot. Fernando asked us to go with the flow, to react to situations that emerged in the moment. I was impressed by his ability to listen and willingness to go with the actors’ ideas. I would look at Fernando and César Charlone (Meirelles’ go-to cinematographer) and they seemed like two kids making a short film. Their enthusiasm and playfulness was surprising.

I never doubted that you and Jonathan Pryce were playing the same person, even though you didn’t imitate each other’s body language. Was there any discussion?

We talked about it. The public knows coming into the movie that these two actors are playing Francis. It’s an accepted convention, and Fernando was aware we didn’t have to force a likeness.

That said, Pryce has the Argentinian persona down — the posture, the demeanor. Were you involved in helping him achieve this?

Well, he is an extraordinary actor. Jonathan was taking it all in, the gestures that are very unique and far different to what you would encounter in Wales (Pryce’s birthplace). Jonathan spent a lot of time in Argentina and got to see my performance.

Juan Minujin plays Jorge Bergoglio from his early twenties to his fifties. This means embodying the joie-de-vivre of his youth and the darkness that enveloped him (and most of Latin America) in the ’70s. “He was a very controversial character in Argentina until he became the Pope” says Minujin.

The film embraces this aspect of Bergoglio’s life — in fact, his relationship with two Jesuit priests unwilling to accommodate the dictatorship weighs heavily in the character’s mind.

Did you have a notion of who Bergoglio was before he became Pope?

Yes, in Argentina we all had an idea who he was and [saw] his radical turn when he was chosen. I remember him as a very circumspect guy, very serious. There isn’t any archival material of Bergoglio smiling. When he was named Pope — which was a huge surprise for us — he came out with a very different mission: establishing bridges between the helpless and the powerful.

How can you understand this transformation?

I believe Bergoglio read the room well: he identified the organization’s needs globally. There was a craving for more inclusion, and to change certain aspects of the Church, particularly in Latin America where Catholicism still has considerable heft. He also acknowledged the mistakes he made before becoming Pope.

Did you have to think it over when they offered you the role?

No, I was enticed by the challenge. It’s the first time I’ve played a well-known character that’s still alive. It has pros and cons: there’s a lot of material to draw from, but since everybody knows who he is, they’ll be judging your performance. But under Fernando’s command, I felt confident he had the right standpoint.

How do you feel The Two Popes is relevant today?

We’re witnessing the rise of governments that encourage intolerance and division. In this context, a film like this one — featuring two people with different points of view capable of establishing a dialogue — is compelling. I also believe Pope Francis is doing something revolutionary, within the margins he has been given: opening the door to the gay community, climate change, immigrants. Francis is moving the church towards those in need and away from the powerful.