Year of the T. Rex

Scotty’s first year at the RSM had dinosaur‑sized impact 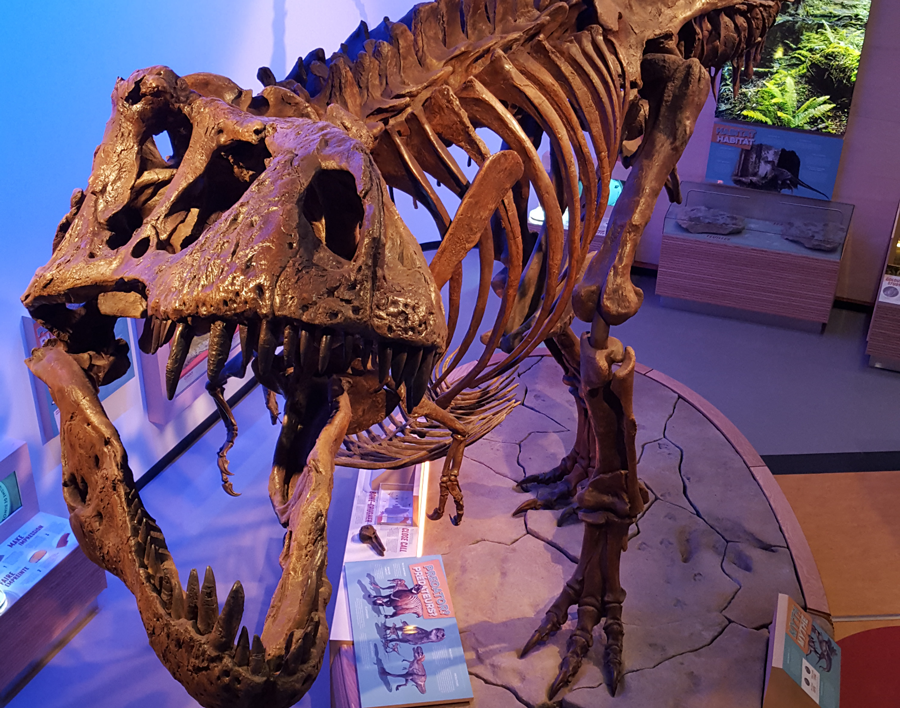 The numbers are in for the first six months, and it looks like Scotty the T. rex’s debut as Saskatchewan’s official fossil at the Royal Saskatchewan Museum is a hit.

“In past years, we had around 140,000 visitors,” says RSM director Peter Menzies. “This year, we’ll have around 180,000. Those are pretty big numbers for a small institution.

“And we’ve had people coming from all over,” adds Menzies.

You might recall the RSM held a contest back in 2016 to select a fossil to join other provincial emblems. While the seven candidates, which included a 92-million-year-old crocodile, a mammoth and a short and long-necked plesiosaur, were all worthy, Scotty was in a class by itself. It’s been recognized as one of the largest, oldest and most complete Tyrannosaurus rex specimens since its 1991 discovery in south-west Saskatchewan.

Really, picking it as our official fossil was a no-brainer. And that’s what voters did.

With a $500,000 federal grant the RSM began construction on a new gallery to showcase Scotty in July 2018. When the exhibit opened mid-May, CBS This Morning sent a crew to cover the story. There was other international press too.

“Scotty has rebranded the museum,” says Menzies. “That’s what we’re known for now — as the home of Scotty, the world’s largest T. rex.”

The title of the world’s biggest T. rex had been held by Sue at Chicago’s Field Museum (Sue was the T. rex in Ben Stiller’s 2006 comedy Night at the Museum).

But just weeks before the Scotty gallery opened, says RSM palaeontologist Ryan McKellar, a University of Alberta study put Scotty at the top.

“Sue turns out to be about five per cent smaller than Scotty,” says McKellar. “Most of that comes down to weight, but there’s a small change in total length too.”

Scotty lived during the late Cretaceous period about 67 million years ago. Back then, Saskatchewan was much different than today, says McKellar.

“There used to be a seaway that ran from the Gulf of Mexico up to the Arctic. During some parts of the Cretaceous we were underwater, during other parts, like near the end, we were coastal property with a warm temperate forest and some swampy spots like the Florida Everglades.”

Scotty lived to the ripe old age (at least for a T. rex) of around 30. As a long-lived adult, it measured 13 metres in length and weighed an estimated 8870 kilograms.

Aside from the reconstructed skeleton, the gallery has a number of interactive stations that highlight unique characteristics of Scotty (like its numerous wounds and other injuries) and offer background information on what life was like for tyrannosaurs in the late Cretaceous. One favourite lets you hear/feel the deep rumble of an adult T. Rex’s “roar”.

Since May, the RSM has added several new stations, including one where you can test different skin colours and textures on a model T. rex.

The museum has also organized child-friendly programming around T. rexes and started to roll out some souvenir merchandise.

“Dinosaurs are very attractive to kids, and therefore families,” says Menzies. “If you drop by the gift shop now, you’ll see some ugly Christmas shirts with Scotty’s skull on them. There are T. rex socks, and even onesies for babies. The merchandising was very successful this year, and we’ll be developing more.”

Purists might groan, but if the merch helps generate interest in dinosaurs and raise revenue for the RSM, what’s the harm?

Especially when it’s backed up by a scientifically rigorous exhibit that paints a fascinating new portrait of the Tyrannosaurus rex.

To see how much our understanding has evolved in recent years, all you have to do is compare Scotty to the RSM’s original T. rex star Megamunch.

Megamunch is animatronic, so he’s got that on Scotty. But otherwise he’s sadly out of date, says McKellar.

“Megamunch is the 1980s take on what a T. rex was like. It’s a one-third scale model, but it’s the standard tail-dragging pose with a slow, plodding look. Now, we know T. rexes were much more active.”

Since the mid-1990s, evidence has accumulated that many dinosaurs had feathers too, says McKellar. “It’s thought a lot of the big meat-eaters, at least the juveniles, would’ve had some feathers. Scotty, more than likely, would’ve been bristly on top.”

“With tyrannosaurs, we see two body shapes. Some are robust and beefy, others are bit more slender. And it looks like we may have the difference between males and females captured in [those] body shapes.

“Other things include deposits where you have more than one tyrannosaur, such as an albertosaur, in the same bone bed at the same time, which suggests they were living in groups,” McKellar says. “You might’ve had pack hunting, which is really terrifying if you’re dealing with tyrannosaurs.”

As awesome as Scotty is, it’s far from the only feather in the RSM dinosaur crown. McKellar himself has collaborated on several international studies — including one in 2016 which identified the feathered tail of juvenile coelurosaur in a 99 million-year-old piece of fossilized amber from Myanmar.

The response to the Scotty exhibit, says Menzies, shows the RSM’s potential to be a major attraction for Saskatchewan. And with additional funding, the museum could expand the exhibit to highlight other Cretaceous fossils in its collection. [see sidebar]

“We’ve been on the cover of National Geographic in China,” Menzies says. “China is a pretty big market for Saskatchewan. Getting our name out there is really useful.

“There’s an opportunity for the RSM to be a key source of civic pride,” he concludes. “It’s the place that when your relatives visit, or someone else is in town and they ask what to do, you say ‘Oh, you have to see this. It’s something we have that nobody else does.’”

Saskatchewan is rich in Cretaceous fossils. That’s partly due to sediments laid down by the inland sea and shore, which proved to be a good trap for dinosaur bones.

But the glaciers that swept down from the north many millions of years later played a key role too, says Ryan McKellar.

“They scraped away a lot of the rock that accumulated above those sediments and exposed them either in the glacial scours or the rivers that came afterwards. In the badlands, which are decent for ranching, but not good for farming, we often have exposures of these rocks, so the whole southwest corner is a fantastic place to go hunting.”

While Saskatchewan has a wealth of dinosaur riches, we were one of the last provinces/states in North America to name an official fossil.

Fortunately, when we finally did, we able to lay claim to arguably the most iconic dinosaur of all.

“The T. rex is the largest meat-eating dinosaur there ever was — the last one before they went extinct,” says McKellar. “It has cool features, like a bite force that exerted over a thousand pounds of pressure, and it was the only dinosaur that basically chewed animals whole, bones and all. And we’ve got the fossil poop made entirely of bone fragments to prove it.”

Ah yes, the poop — or coprolite in science-speak. It’s a second T. rex treasure in the RSM trove. It also has bones from a one-year old and a six- to eight-year-old animal.

“These travel all over the world,” says McKellar. “The coprolite is at the American Museum of Natural History right now. It’s been to Japan. It’s been to the Netherlands.”

As visitors to the RSM know, the museum is also home to a prized skull from a triceratops — a late Cretaceous herbivore. It also has a thescelosaur — an ostrich-like herbivore from the same period.

“Saskatchewan has a good representation of herbivores, although not so much with duck-billed dinosaurs,” says McKellar. “But we’re slowly building up the collection, and that’s where the research comes in.

“This summer, we turned up parts of a triceratops,” says McKellar. “The year before, it was part of a duck-billed dinosaur.

“Each year we add to the fossil record for Saskatchewan,” he says. “And quite often, they’re ammunition for building the story we put into exhibits.”