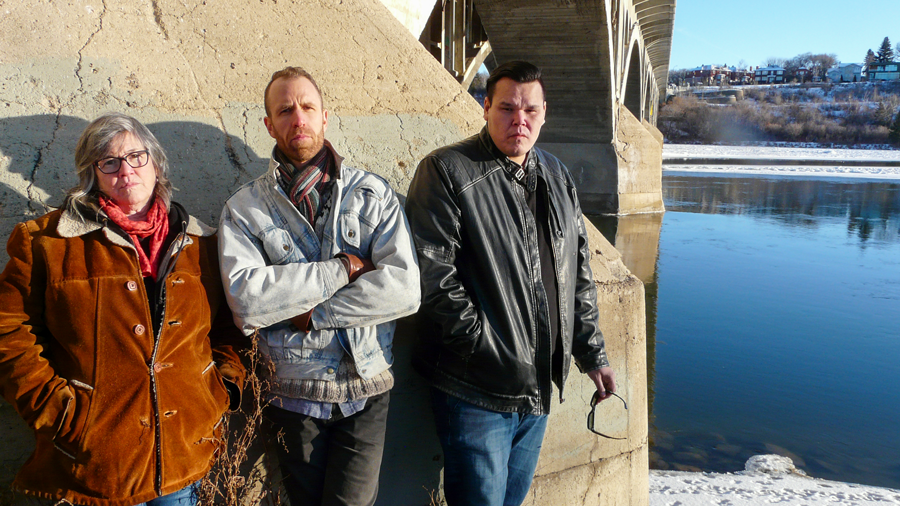 Joel Bernbaum, Yvette Nolan and Lancelot Knight are the creative team behind Reasonable Doubt, a musical drama set to premiere at Persephone Theatre on Jan. 29 that addresses one of the most painful incidents in Saskatchewan history.

Originally, though, the intention was to examine one of the most painful realities in Saskatchewan — both past, and present: The troubled relationship between Indigenous and non-Indigenous people in the province.

Bernbaum began that project in 2015 with the help of a Saskatchewan Arts Board grant.

“I had funding to do about 50 interviews,” he says. “People were interested in talking to me, but they were all very polite. They provided measured answers that almost seemed rehearsed. Then when the tragedy happened, people began to speak with a new kind of raw honesty from a heart-space instead of a head-space.”

The tragedy Bernbaum is referring to took place Aug. 9, 2016, when Colten Boushie was shot and killed by Gerald Stanley on Stanley’s farm near Biggar.

Fallout from the incident, as Saskatchewanians will long remember, was instantaneous — and heated.  Then- premier Brad Wall condemned the hateful sentiments as “a betrayal of the very values and character of Saskatchewan.”

When Bernbaum saw the reaction he decided to tighten the focus of his project from a general look at racism in Saskatchewan to the specifics of the Colten Boushie/Gerald Stanley case. It was at that point that Persephone Theatre became involved, and Algonquin director/playwright Yvette Nolan and Cree musician Lancelot Knight joined the creative team.

The first thing Bernbaum did was revisit some of the people he’d previously interviewed. “I went back to them and asked ‘Okay, now that we’re in this new space, what should we talk about?’”

“They were all done face-to-face,” he says. “They ranged from one-on-one to going into a grade five classroom to standing on street corners and asking random people if they had five minutes to talk to me. I was in parking lots; I knocked on doors in residential neighbourhoods.”

Bernbaum is the founding artistic director of SUM Theatre in Saskatoon. But he has a background in journalism, and he says he made a conscious effort to interview a diverse range of people.

“The goal has always been to create a kaleidoscopic view of the issue, never to take a side,” he says. “We [sought] input from all ages, cultures and regions of the province.

“Of course, you can’t talk to people who don’t want to talk to you.”

Bernbaum describes his working process as verbatim theatre. As he gathered the interviews, he would pass them on to Yvette Nolan to review. They also got the court transcript from Stanley’s trial, which was held Jan. 30–Feb. 9, 2018 in Battleford.

Incidents similar to the Boushie/Stanley case have inflamed racial tensions in Saskatchewan in the past. But this case was perhaps the first to play out in social media — where many hurtful and racist comments were made.

Working through the lens of verbatim theatre, though, the group elected not to include social media — at least, not directly. “There are references to media and social media,” says Bernbaum. “But the sources of information we relied on were the interviews, the court transcript, and the third strand of the braid is the original music by Lancelot Knight.”

The Boushie/Stanley case has already been the subject of an award-winning documentary by Tasha Hubbard called Nipawistamasowin: We Will Stand Up. While Reasonable Doubt has documentary elements, says Nolan, it’s very much a theatrical work.

“It’s not terribly chronological,” she says. “Because of the container of the court transcript, you’re not completely unanchored from time. But we’re not married to the idea that this happened, then this, then this, because we’re also talking about past, present and future and where we hope we’re all going. So it’s not naturalistic in that sense.”

Knight’s music is another important creative element, says Nolan. “Sometimes when Lance is singing, he’s [the] counterpoint to whatever the verbatim piece is.

“But performers can be in character, and then suddenly they’re singing, so there’s kind of a dual reality going on,” she adds. “It’s like musical theatre in a way, where there are words, words, words, then there’s no other way to express something than through music. So we move into a different place.”

When I spoke with Bernbaum and Nolan, they and Knight were in the early days of rehearsal with the cast: Kris Alvarez, Nathan Howe, Krystle Pederson, Tara Sky and Colin Wolf.

“One thing we’ve been talking about is how we’re creating dialogue,” says Nolan. “The play itself is about hearing the voices of people we live with in this province. We’ve done some workshops and public readings leading up to this, so we also have the voices of people talking about the play itself. So there’s a bit of a conversation loop going on even inside the play.

“The performers are all actors, so they bring that to it as well,” says Nolan. “They’re not mimicking or imitating the interview subjects. But they do embody them as characters. The other day, we were doing the grade five classroom, and they were channelling their inner 10-year old.”

Act I focuses on the Boushie/Stanley case itself. But in Act II, the focus shifts, says Bernbaum.

“In Act II, we move more in the direction of ‘So, what now? How are we going to work through the situation we’re in?’”

There are many dimensions to that question. Bernbaum is hopeful Reasonable Doubt will help promote much needed discussion on how to resolve the challenges we face.

“With theatre these days, it’s common for land acknowledgements to be done at the start, along with other announcements such as turn off your cellphone,” says Bernbaum. “But an engaging, entertaining, and heart-provoking play creates an opportunity for new dialogue and new relationships to occur.

That, to me, is exciting, courageous and hopeful.”

“Theatre is one of the last places, I think, where we can do that civilly in this day and age.”

While the Colten Boushie/Gerald Stanley case is a Saskatchewan story, it’s representative of a much broader Canadian reality. And Bernbaum says they’ve already been contacted by other Canadian theatre companies interested in staging Reasonable Doubt.

“I’d also love to see it taken to communities across Saskatchewan because it’s very much a piece spoken by the people in this province,” says Bernbaum. “So I’d love to see it create a space for conversation in their communities too.”