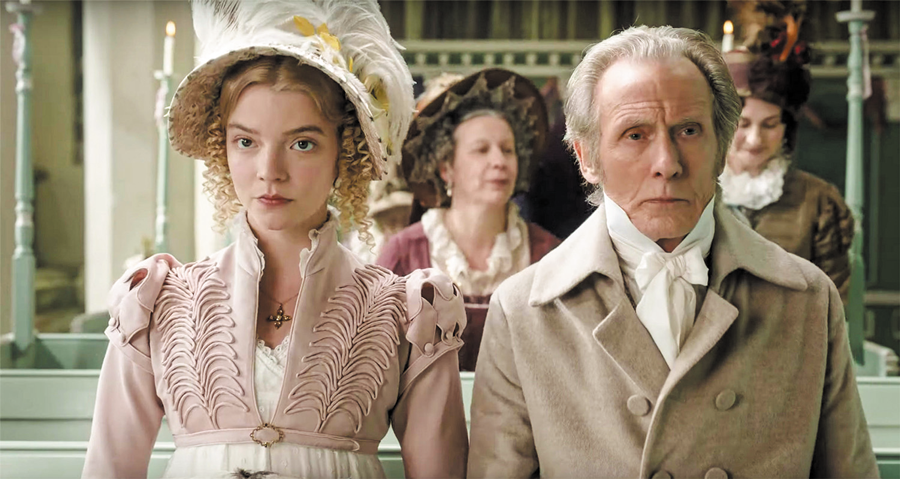 It’s hard to understand how definitive Clueless was as an adaptation of Jane Austen’s “Emma” without a standard version to measure it against. Thankfully, here comes Emma. (yes, with a pretentious period at the end), a classic reimagining with a twist.

Watching Emma., instead of going along with the story, I kept thinking “that’s the Brittany Murphy character, that’s the Paul Rudd character…” I blame the new version, since it should have paid as much attention to the structure and the written word as the wardrobe.

But I’m getting ahead of myself. The time is the early 19th century. The place, a town where only rich people live. The lead, Emma Woodhouse (Anna Taylor-Joy, Split), a bored socialite who kills time by meddling in other peoples’ affairs. Matchmaking, they call it.

Emma’s latest project is Harriet Smith (Mia Goth, A Cure for Wellness), a childish young woman who accepts Emma’s word as gospel. Unfortunately, following her advice costs Harriet a perfectly good suitor. Furthermore, the object of her affection, Mr. Elton (Josh O’Connor, God’s Own Country) only has eyes for Emma and Emma’s money.

In turn, Ms. Woodhouse’s lack of self-awareness serves her poorly when dealing with change, let alone realizing the perfect match for her is childhood friend Mr. Knightley (Johnny Flynn, Beast), who regularly calls her on her BS. Knightley looks terribly uncomfortable In his fancy clothing, which works for a character that doesn’t suffer fools lightly yet is surrounded by very silly people.

Anna Taylor-Joy turns this Emma into a “mean girl”, purse-lipped and barely likeable. She’s redeemed by her love for her vexing father (an aloof Bill Nighy).

The socially untouchable Emma could get away with murder. Yet the movie refuses to follow her into the darkest corners of Jane Austen’s creation.

First-time director and music video specialist Autumn de Wilde seems more concerned with how the film looks than its substance (see background: lots of Beck videos). Granted, Emma. looks exquisite: the period costumes have a modern twist (lively colors, fabric patterns, impossibly high necklines) and the locations are perfect for the story. But de Wilde does a poor job establishing relationships, goals and articulating all the characters cross-purposes. Once again, I must thank Clueless for the assist.

Emma.’s greatest asset is the young cast. Taylor-Joy is well-established but Goth, O’Connor, Flynn and Callum Turner all have promising careers to look forward to. Sex Education fans will be delighted to see Lily and Adam playing roles that have nothing to do with their sitcom characters. Rounding the cast, comedian Miranda Hart (Spy) as Miss Bates, the embodiment of sweet and affable people who are actually impossible to stomach (everybody knows one).

Credit to Jane Austen’s writing that despite the director’s aesthetic fixations, the film still succeeds at reaching a stirring climax… to quickly return to inconsequentially pleasant.