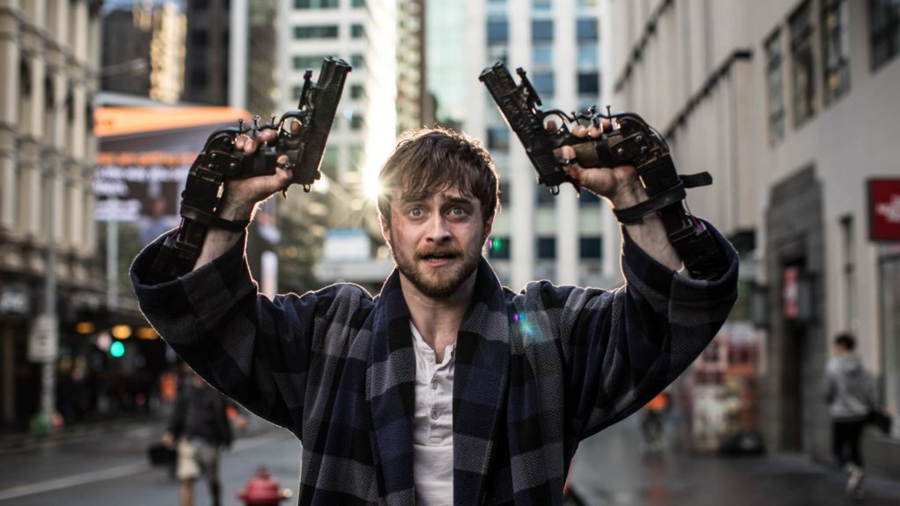 Actors who’ve played famous roles can have a difficult time branching out. For Daniel Radcliffe, that challenge had the added difficulty of growing up on screen as the iconic Harry Potter. What’s a former boy wizard to do?

After a perfectly competent foray into romcoms (The F Word), Radcliffe has let his freak flag fly. He has played a flatulent corpse in Swiss Army Man, a scorned lover-turned-demon in Horns and a low-level angel in Miracle Workers.

His latest is Guns Akimbo, a sci-fi thriller about Miles (Radcliffe), who, after a fight with Internet trolls, wakes up with guns bolted to his hands. He doesn’t even have time to process this before finding himself in a real-life battle royale with strangers battling to the death for ratings.

Radcliffe describes it as “a Jason Statham movie directed by Edgar Wright.”

I caught up with the actor and his co-star Weaving at last fall’s Toronto Film Festival. After enduring the dumbest Harry Potter questions (“Are there any spells you would use in your everyday life?”, “Is this movie the antidote to Potter?”, “Do you have a WhatsApp group with Emma and Rupert?”, “How do you deal with fame?”, “Robert Pattinson is here, have you seen him?”), Radcliffe seemed relieved to be able to talk about something else, but would never acknowledge it. He’s too polite.

I actually have questions about the film.

Have you found yourself going down the rabbit hole of dealing with trolls?

Weaving: I make a conscious choice to not look at comments or read reviews. If I rely too heavily on them for my own satisfaction, it would cause more harm than good.

Radcliffe: It’s not a huge moral stance. I think I would be too emotional about it. Years ago, during my late teens, early twenties, I did spend a lot of time reading comments and it’s not a good thing to do for your mental health.

What kind of emotions did those comments trigger?

Radcliffe: It wasn’t anger, it made me sad. Not going to tell you what specifically — it’s all still there — but you only get upset by the things you believe at some level are true. Self-harmony is a very serious issue and I don’t want to make light of it, but I think there’s a masochistic tendency in reading stuff about yourself that becomes addictive. It’s a cycle you have to break.

How long did it take to get those guns bolted to your hands?

Radcliffe: The guns themselves were very quick, strapped on over the arms. The bolts were obviously make-up — they took about two hours the first day and an hour by the time we finished. I could put my pants by myself. Couldn’t button them though.

Samara, you also wear a fair number of prosthetics. Which was the most uncomfortable one?

Weaving: There were two days I had my eye knocked out by a hammer and I had a prosthetic. I got really dizzy and I had to do a fight sequence with one eye. Those things have a really fun side. In what other job could you possibly be doing that?

What do you find artistically satisfying about working in genre films?

Radcliffe: That’s the thing. I forget that I keep picking genre movies, and then everyone’s like “you did another one!” There’s something fun about making films that aren’t naturalistic. If you can justify it enough in the story, you can do the craziest stuff. There’s a weird magic realism, modern fairy tale tone to this, Horns and Swiss Army Man. A very dark fairy tale. But most fairy tales were very dark.

Do you have to identify with a character to play them?

Then how do you relate to Nix?

Weaving: She was so well-written, and with the added costume and make-up, I felt she came to life, as cliché as that sounds. Everyone started treating me differently. People would cross the street to avoid me, security would be checking my ID. They wouldn’t let me into buildings. When I tried to get dinner after work, I would be turned down. I felt for Nix.

Live By The Sword…

A big plot point in Guns Akimbo is how nothing good comes from getting into an online fight. As I was writing this interview, the writer/director Jason Lei Howden engaged two African-American critics and bluntly accused them of pushing blogger Dilara Elbir to attempt suicide (the writer in question used the N-word on her site and was called out for it, a lot). Details are fuzzy, but Film Twitter has, by and large, sided with the critics — and the filmmaker has closed his account.

As it happens, I had the chance to discuss troll behaviour with Howden months before the controversy. Previous experiences seem to have weighed into his decision of getting into ill-advised arguments just days before the release of his movie.

“There was a film blog that said something nasty about Deathgasm [his previous film] and tagged me into it,” says Howden. “It got really out of control. They were obviously trying to bait me, and I bit. They screen-captured my responses and post them on their blog. After that, I started to think about my online interactions. You’ve to be thick-skinned, you don’t need to bite.

I’ve the impression Howden felt the need to come to the defense of someone he perceived as being bullied and, like with Deathgasm, it went off the rails.

If Jason had only listened to Jason…

“I feel bad for kids today having to endure cyberbullying,” he says. “We never had to deal with any of that.”