A space-pop traveller embraces life on the outer rim 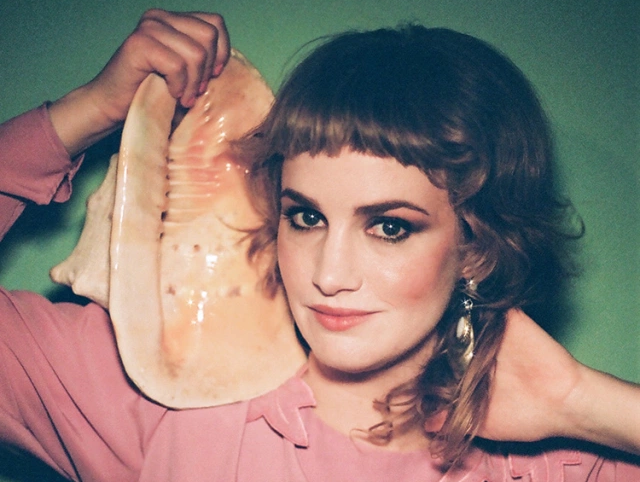 When people consider potential sources of stress in life, leaving family and friends behind to move to a distant city and having a first child rank right up there.

In the span of a few years, Amber Goodwyn did both. First, she moved with her partner from Montreal where she played in the rock bands Cobra & Vulture and Nightwood and was immersed in the arts to, uh… the slightly less vibrant and cosmopolitan city of Regina.

Culture shock was inevitable but Goodwyn embraced her new Saskatchewan life. She works at Regina’s community radio station and creates music as Natural Sympathies. She recently released an ambitious seven-song art project, Porous, where each song is accompanied by a short film.

Goodwyn will showcase Porous at a JUNOfest gig at the Underground Café on March 13.

When Goodwyn moved to Regina from Montreal, she says, she was content to take a break from music. But when the baby arrived, and she found herself home alone a lot, she did start to feel a little trapped.

She began working on music again — but with a twist.

“I love being in a rock band,” Goodwyn says. “But for a long time, I’d wanted to explore theatrical and performative aspects of myself. I was also curious about whether I would be able to make music on my own, and whether I’d be brave enough.”

As described by Goodwyn, Natural Sympathies is a “pseudo sci-fi character who also makes fun of the ‘born sexy yesterday’ trope.” For those who don’t know, the trope is a staple of nerd fantasy, where you have a beautiful woman who is otherwise naïve and child-like (think Milla Jovovich as Leeloo in Fifth Element).

“Anything that’s fun, that’s maybe a bit ridiculous and silly, but also confident and politicized, motivates me so much,” she says.

That duality is especially evident in Porous, says Goodwyn.

“With my previous bands, and even early songs with Natural Sympathies, the writing was pretty thick with metaphor,” she says. “Porous is like feeling I have no barriers left. I’m tired of being indirect and have decided to address things that have been making me angry. Everything around the album, visually, is quite playful. But at its heart, the album is angry about the way the world is right now.”

One source of anger for Goodwyn is the sexism, homophobia, xenophobia and racism she’s either experienced herself or through friends and colleagues she’s come to know since moving to Saskatchewan.

“I’m from Montreal, and it’s not perfect,” she says. “But we’re kind of in the Bible Belt here, and it’s really hard for people who live outside the norm. They’re very brave, and they’re making this place better all the time, so I’m really inspired by them for living their lives honestly and hopefully as safely as possible.”

Goodwyn has filmmaking degree from Concordia University, and it had long been a dream of hers to make a series of music videos with an overarching narrative. With Porous, she decided she finally had the songs to do it.

To create the companion films, Goodwyn recruited seven independent filmmakers she knew either personally or by reputation. She also enlisted local fashion designers, choreographers and visual artists to help with costumes, props, sets and other elements of the project.

After pairing each filmmaker with a song, Goodwyn met with them separately to discuss her concept.

“A few of the films are kind of scripted due to the choreography, and one had a storyboard,” she says. “But most had a large aspect of improvisation which is important for the sense of play and collaboration.”

The films have distinct styles reflective of the individual filmmakers, but there are reoccurring characters, costumes and symbols.

“Together, they create a narrative which sees Natural Sympathies crash land on Earth, escape her ship and try to find a way to return home,” says Goodwyn. “But she ends up finding that what she needed was here all along.”

Let All The Children Boogie

“Natural sympathies”, as an expression, describes people who have an affinity for each other based on some shared hobby, interest, viewpoint, or whatever. That’s an ideal Goodwyn lives up to with Porous.

“I’ve always been one who, if I didn’t see the culture around me that would sustain me in my world view, I’d do what I could to make my own world around me,” she says.

“This project was made in concert with a bunch of artists with a vision for Saskatchewan and beyond that is progressive and healing, and not harmful,” Goodwyn says. “I’m just trying to bravely express my perspective, and hope I’m creating space for people, and that they’re liking the music.”