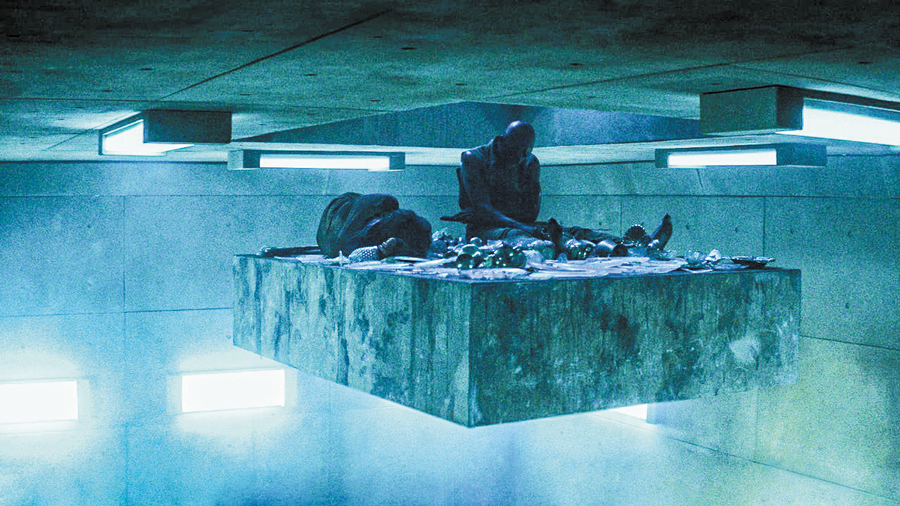 If our worldwide pandemic hasn’t turned you off dystopic movies, you could do a lot worse than The Platform.

A Spanish sci-fi/horror/social commentary hybrid, The Platform won last year’s TIFF Midnight Madness section. It wasn’t even close: the film is effective at every level and even provides a few laughs amid the carnage.

Originally written as a play that was never produced, The Platform takes place in a vacuum, a prison of sorts in which each cell is on top of the other. There over 200 levels, two prisoners in each. At the center, a hole. Once a day, a slab with food descends floor by floor. The inmates can take as much as they want for a couple of minutes, which means the ones at the top get to gorge themselves while the rest must survive on leftovers.

Suffice to say, there are levels that don’t get any sustenance and alternatives must be devised. Every 30 days, the prison’s denizens trade floors: sometimes you’re closer to the food, others, you are the food.

The audience surrogate is Goreng (Ivan Massagué, Pan’s Labyrinth), a man who agrees to spend six months in the structure in exchange for a university title. He develops class awareness and tries to curb the system. But as many thinkers before him have discovered, there’s no perfect model for wealth distribution.

The Platform is well thought through. The creative team works several economic systems into the script and successfully portrays the shortcomings of each (sure, the trickle-down effect is profoundly unfair but a state-run economy is more likely to get you killed). It’s also not short on gore and has the good sense to include gallows humour.

I had the chance to talk to the filmmaker behind The Platform, Galden Gaztelu-Urrutia, at TIFF last September. A first-time feature director, Gaztelu-Urrutia used his background in marketing to make the film look considerably more expensive than it actually was. This translated into a 1,000-page preproduction bible, including every camera shot. “It looks casual, but there was nothing casual about it”, says the filmmaker.

Midnight Madness programmer Peter Kuplowsky told me he received your submission and was blown away by it. When did you know you had something special?

The moment I read the play by David (Desola) and Pedro (Rivero). I was also aware it would take a lot of work to make it cinematic. We didn’t verbalize it, in case we weren’t successful and came across as idiots.

Your film reminded me of Cube but it’s more conceptually sound.

We didn’t want to make a manifesto or tell others what to think. Our intention was to expose the problems [of ideologies] and show a variety of characters you may encounter in real life. We’re appealing to individual kindness. I’ve experienced it myself while making the movie. I’m not the same person that I was when I started: I’m more sympathetic to other people’s realities.

I got the impression you’re not an optimist regarding the human condition.

No. In fact, we discussed ending the movie on a positive note, make the protagonist’s efforts bear fruit, but decided against it. We allow in a bit of hope, but in the end all the lead achieves is changing himself. If we talk about ideology, none of the systems depicted work because they all require collaboration. There will always be individuals who rig the system against the underprivileged.

The production design for the food is remarkable. How did you calculate how much food would be available at every level?

Every day, enough food to feed every single level goes down the hole. We calculated the calories required for sustenance, the size of the platform and the number of prisoners. We also wanted to make it aesthetically interesting. The meals are initially opulent and we estimated how destroyed they should look as they go down.

The notion of a character agreeing to spend months in lockdown just to read a book seems easy to relate to. [Author’s note: Little did I know…]

We wanted a character who would be as neutral as possible. He just wants to read a book and quit smoking. Everybody can identify with that. He starts the movie as an innocent, a newborn, and ends up eating human flesh.

I didn’t notice many computer effects.

Given that the story was originally written for the stage, I wanted to make it very physical. You can only achieve that using organic elements and allow little digital intervention. While in the movie the prison has over 200 levels, we only built two, for perspective. The hole itself was green screen. When the platform goes up it’s CGI but coming down it’s real.

Do you believe film — and your movie in particular — has the capacity to generate social change?

I hope so. The capacity of any artistic expression to foster social change is limited. We wanted to make an entertaining movie, but also encourage reflection. We’re all very similar: depending on the context we’re born in, we adopt the ideology that works best for us. So, it’s worth asking: are you the same person on level six and level 200?

Following the release of The Platform, what wouldn’t you do as a follow-up?

The remake in English.