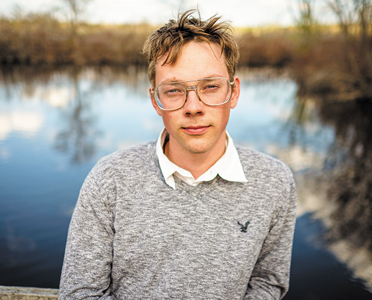 This former member of Regina band Indigo Joseph released his debut album Spirit Animals on May 8. The album features seven songs in English and three in French. To add to the fun, here are six songs Lord Byrun considers favourites. /Gregory Beatty

I feel like this song paved the way for electronic dance music. I can hear Daft Punk in the drum machine on the classic intro. The gloomy lyrics only add to the emotional tension, something its members perfected in their previous band, Joy Division.

What an uplifting song! Its bouncing bass line and galloping rhythm were influenced by African music, and this whole album is amazing. The lyrics are pure poetry and Paul’s voice is as angelic as ever. The percussive elements flavouring the track are so tasteful and masterful it gives the whole song a glow of genius.

A song to get married to and buried to. It instantly transforms my mood. The song’s fabric is infused with a contagious urgency to live in the present. It’s so groovy there’s no question why it’s a classic. If you don’t know it or aren’t sure about Bowie, this is a great place to start!

You got to love the shakers in this one! A super-catchy chorus plus a super-catchy beat and you’ve got a classic Hip hit. We don’t hear the word “poet” a lot in Rock ‘n’ Roll — I think Rock tries to hide its poetic tendencies. It may be a little embarrassed but this band never was.

What do you get when you mix one of history’s most creative bands with one of its most creative producers? Brian Eno undoubtedly brought The Talking Heads to another level with this song. The producer known for inventing ambient music revolutionized the use of the studio as an ingredient in creating songs.

One of my biggest influences is Frank Black. His raw delivery, surreal lyrics and laissez-faire attitude wiped the slate clean for me about what an artist can be. This is such a fun song with so many classic Pixies eccentricities. Mix in Joey Santiago’s signature lead guitar and voila, you have history.