Don’t believe in COVID-19? Think climate change is a hoax? Right-wing politicians have a deal for you 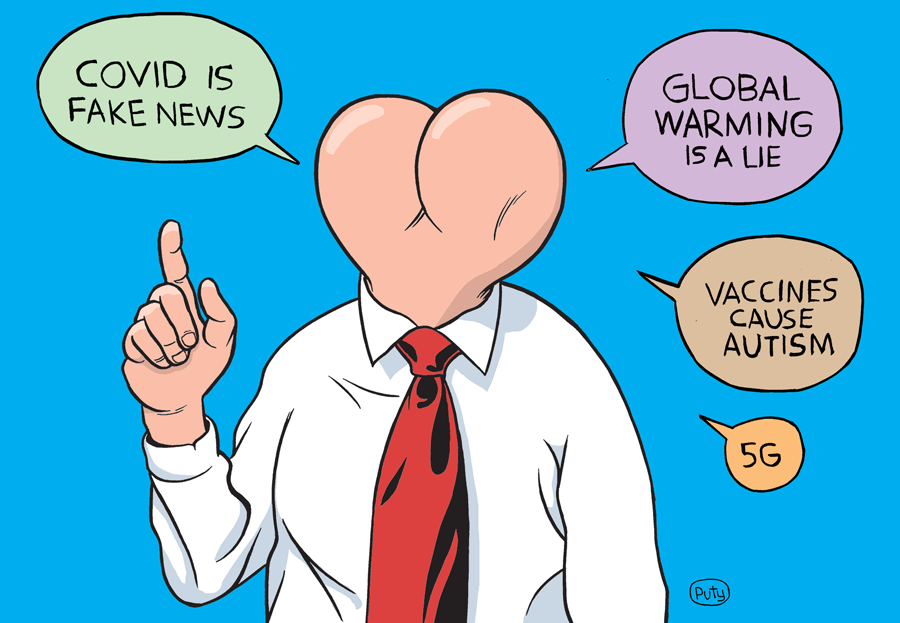 At its core, COVID-19 is a science story. But as with pretty much everything else in our fractured world these days, It’s also a political tale.

For one thing, politics figures into in how countries have responded to the pandemic.

We can learn a lot from country-to-country comparisons of COVID-19 statistics. It’s true, they aren’t aren’t always fair — island nations, for instance, have an obvious advantage at controlling the virus’s spread compared to countries that are bunched together. Likewise, densely populated countries face greater challenges than sparsely populated ones.

Still, the statistics for COVID-19 infections and death tolls are telling. Generally speaking, nations that followed their public health officials’ virus-fighting advice have had the best results.

The worst performers? Those tend to be countries led by populist politicians — the U.S., Brazil, Russia and the UK are prime examples — who put their political and economic interests ahead of science.

It should come as a shock in 2020 that governments of major countries could be so dismissive of science on such a critical issue. Unfortunately, it’s not.

Exhibit A is the decades-long war that right-wing populists have waged denying climate change.

“It seems to go back to the core values of the people making decisions,” she says. “The politicization of COVID-19 seems entirely consistent with the response to the climate crisis.”

The difference is the COVID-19 denial campaign has built-in limits.

“Psychologically, people have a tendency to deny something they prefer not to be true — or at least its importance, and what to do about it,” says Pennycook. “There are people who want to get the economy going again but there’s not much opportunity for them to deny the virus exists. They can’t go that far because it’s just obviously the case.

“What makes climate change different is that millions of dollars have been spent every year for decades by oil companies, think tanks and other vested interests to muddy the waters.”

There’s no doubt that COVID-19 has impacted our lives significantly. But the stark reality is that we are in the early stages of studying a new (novel) coronavirus that evidence shows is highly contagious and sometimes fatal.

And while some countries have successfully controlled the virus (gold star to New Zealand!), many are struggling.

For now, the watchword must be caution.

Still, disinformation on COVID-19 persists. While the campaign against action hasn’t been as organized or well-funded as climate change denial, it has had an influence, says Pennycook.

“A study in mid-March showed there were 21 misconceptions around COVID-19,” he says. “One example would be that the flu is just as bad as the virus.”

While coronavirus protesters claim to be grassroots, there’s evidence of state-sponsored propaganda — such as the English-language news channel Russia Today. The U.S. and China are engaged in a mini-propaganda war over the virus, too. Conspiracy theories and disinformation have been spread by prominent right-wing populists, led by U.S. president Donald “Very Powerful Light Inside The Body” Trump and Brazilian president Jair “Only A Little Flu” Bolsonaro.

And just the other day in the Alberta legislature, UCP premier Jason Kenney called the virus “influenza” six times while defending his government’s plan to end the state of emergency on June 15.

Trump, Bolsonaro and Kenney, of course, are all big-time climate change deniers and distractors. Since they’ve painted themselves into a corner by denying the settled science on climate change, they can hardly turn around and embrace the science on COVID-19 — not without appearing to be hypocrites to enough people to damage their election chances.

When amplified by right-wing media —such as Fox News in the U.S. and, to a lesser extent Postmedia in Canada — their statements can have an impact, says Pennycook.

“If you’re inclined to reject something, it becomes so much easier if people who you respect do the same,” he says. “That’s why it’s important for leaders to be unequivocal with the issue.

“When they’re always talking about economic impacts or whatever and not treating it like a true crisis then it’s not surprising people take it as an opening to dismiss the issue.”

While COVID-19 has obvious life and death consequences, climate change does too. They’re not as immediate as the virus but they are being felt now.

And as climate change ramps up, they’re only going to get worse.

People who accept climate change science have hoped that as deniers see the true threat they’ll cut the bullshit, join the rest of humanity and take action. But if the rhetoric that’s emerged at the extreme end of the pandemic denial movement is any indication, that may not be the case.

The elderly, people with health conditions and the urban working class and poor (primarily visible minorities) have been especially vulnerable in COVID-19’s first wave. And Julia Boughner says there have been unpleasant and ageist messages from those who put politics and economic interests ahead of public health.

“When people make a sweeping comment about how the elderly are close to death anyway and don’t contribute to the economy so they’re not valuable — what does that even mean?” asks Boughner.

“And who really benefits when the economy ‘opens back up’?”

During the early stages of climate change, countries in the developing world will be particularly vulnerable — both from adverse climate effects and a lack of capacity to adapt and protect their citizens. Will populists care, or will they shrug and dismiss the suffering and hardship in those countries as the cost of doing business?

“When we have a situation where an island nation is sinking because of global heating, we may like to think they’re not connected to us,” says Boughner. “But that’s a huge assumption, and it’s incorrect.

“It’s like if people think there’s a hole on one side of a boat but [since] they’re on the other side, they’re not going to sink,” adds Boughner. “I think that’s a good analogy, where if we have a problem in one place it will become a problem in another spot.

“It goes back to core values and what kind of society we want to live in.”

One argument climate change deniers like to trot out is that science, as a discipline, is never “settled”. They like it because as a general principle, it’s true — if contrary evidence is found and presented, scientists evaluate it to determine if it should replace previous conclusions.

That said, scientists have been studying climate change for decades and their data and analysis is solid. COVID-19, though, has only around for seven months. And while scientists have made great strides in understanding the virus and its impact on the body, their investigation is very much a work in progress.

What we’re essentially seeing, says Julia Boughner of the University of Saskatchewan’s Department of Medicine, is science being performed in real-time. The operative word there is “performed”. Usually, scientists conduct research in their labs, in obscurity. But because COVID-19 is urgent, they’ve been releasing their findings without peer review.

“It’s like crowd-sourcing, where they’re getting eyes on pages and brains on problems to get ideas flowing and come up with solutions faster,” says Boughner. “But it’s not meant to usurp the peer-review process. And articles are now being published that have been peer reviewed.”

When media pick up on the findings, they often become headline news. But when preliminary results are released and then routinely refined — if not outright contradicted — by later research, it feeds into the “science is never settled” narrative that climate change-denying populists love so much.

“The pandemic and broader climate crisis are very different, with different kinds of data and different implications,” says Boughner. “But we’re seeing the same patterns with elected or non-elected leaders, and on social media, so they must be stemming from the same thinking and acting.

“Unlike the climate crisis, though, COVID-19 is much more personal,” she says. “So maybe it’s one of those things where you have to live through a trial by fire and come out the other end, and then maybe you decide you have to change.”

Betting money says a Venn diagram of COVID-19 and climate change denial would have a lot of overlap. But it wouldn’t be total, since some prominent climate deniers haven’t claimed the coronavirus is fake.

Boughner is gratified by that, but also frustrated.

“I appreciate all the nuanced and complex reasons for this so I’m not totally naïve but it does make me kind of nuts that you can have someone like our premier deferring to health experts for COVID-19, but be completely hands over ears singing ‘la-la-la’ when it comes to the climate crisis.

“It’s almost like it should be a litmus test,” she says. “Anyone who accepts the science around COVID-19 but refuses to accept climate science is a reality denier, and not to be trusted.”