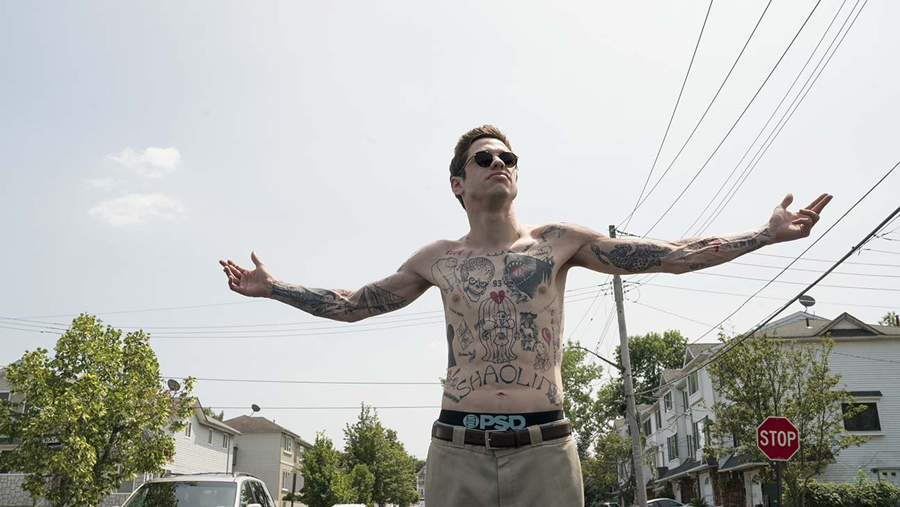 One criticism filmmaker Judd Apatow always leaves himself open to is that his movies are long — unjustifiably so. This Is 40 was two hours and 14 minutes, Funny People was 2:26. Heck, even Trainwreck went over the two-hour mark.

Apatow counts on audiences wanting to spend time with his characters. Amy Schumer as the titular trainwreck was a hoot, same with the Seth Rogen/Katherine Heigl pairing in Knocked Up. But Adam Sandler as the embittered superstar in Funny People was unpleasant to be around and the movie bombed.

The King of Staten Island clocks in at 2:16. Whether that strikes you as too long depends on how you feel about star Pete Davidson. One of the rarest specimens to come out of Saturday Night Live, Davidson has a very limited range and his stand-up is based on self-deprecation while hinting at juicier aspects of his life: namely, his ongoing depression, addiction problems and inexplicable sex-appeal. Yet he has managed to stick around SNL for five seasons.

Davidson’s dad was a firefighter who died in 9/11. The event has reverberated through the comic’s life, and inspired this loosely autobiographical film. Pete is Scott, an aimless twenty-something who spends his days getting high and playing videogames. Scott hopes to become a tattoo artist, but is not willing to do the work to go from amateur to pro.

The stasis comes to an end when his mother, Margie (Marisa Tomei) starts dating a firefighter named Ray (Bill Burr). Not only does Scott not get along with the stern but well-meaning Ray, the fact he’s a firefighter rubs him the wrong way too.

In a normal movie, Scott would clean up his act, focus on his goals, and become his own man. But in The King of Staten Island all progress is microscopic or takes place via inaction. Scott excuses his lack of drive on a multitude of ailments (ADD, Crohn’s), but at no point takes stock. Eventually, you wonder why you should care about the guy. He is more spoiled brat than lovable loser.

Judd Apatow is no dummy. He surrounds Davidson with ringers: Tomei, Steve Buscemi as the station chief and Bel Powley as Steve’s on-and-off girlfriend (her accent is so spot on, you’ll be surprised to discover she’s British). Pete’s good at riffing, so the filmmaker builds the movie around his star’s one skill. It’s mildly entertaining, but doesn’t add too much.

The movie mostly relies on Staten Island tropes for laughs (the accents, the inferiority complex that comes from being at the rump end of New York, the perennial hope for gentrification) — an approach with limited appeal. Davidson is barely likeable throughout. It doesn’t help that his insouciant attitude doesn’t appear to come from deep wounds, but childlike hang-ups, wrecking his mom and sister’s lives along the way.

Unlike fellow Anchorman alum Adam McKay, who has evolved from directing raucous Will Ferrell vehicles to searing political statements (Vice, The Big Short), Apatow keeps making these pointless arrested-development comedies. He hires big-name cinematographers (this time P.T. Anderson regular Robert Elswit), so his films look a notch above. But in the end the purposelessness of his efforts becomes grating.