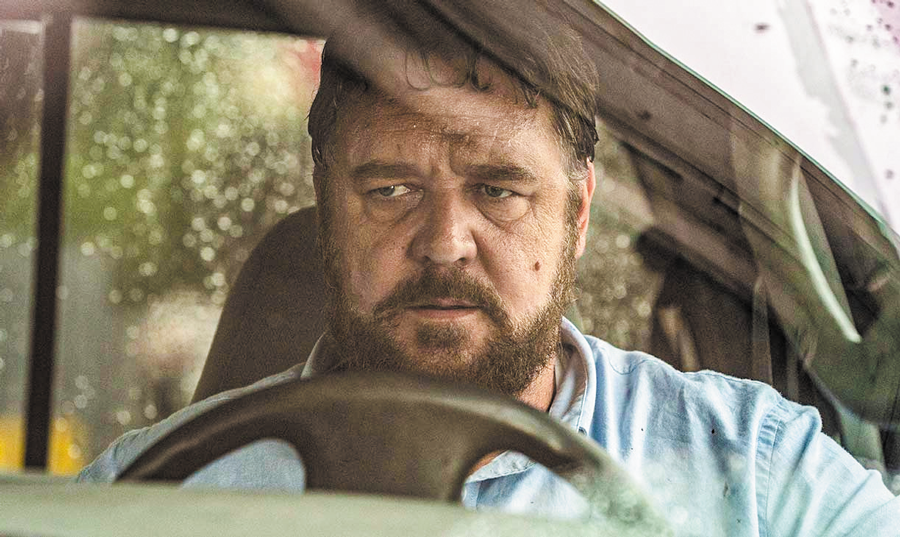 I’m a Russell Crowe apologist. Sure, he’s prone to outbursts and his singing is like gargling with rocks. But for the most part he’s a reliable screen presence (The Mummy being the exception). Now past his pinup prime, Crowe is making interesting choices: a wise-cracking enforcer in The Nice Guys, a Christian extremist in Boy Erased, and the devil himself, Roger Ailes, in The Loudest Voice.

Unlike Michael Douglas in the similarly themed (and more meaty) Falling Down, we’re never expected to sympathize with Crowe’s character in Unhinged (credited here as “Man”). Heck, the first impression we get is of a homicidal maniac on a mission to avenge all the perceived wrongs he’s endured. He believes society is trying to erase him, and he’s been pushed into making a stand.

Rachel (Caren Pistorius, Slow West) is a harried divorced woman having a bad day of her own. Her luck takes a turn for the worse when she honks at “Man” and refuses to apologize. Crowe takes it personally and sets out to make an example of Rachel by slaughtering her friends and family. He doesn’t expect to come out of this rampage alive, making him even more unpredictable.

As far as chillers go, Unhinged is strictly B-movie. Director and co-writer Derrick Borte (The Joneses) relies heavily on one plot device — an unlocked cell phone — and goes to extreme lengths to justify it. He also doesn’t seem to be aware that foreshadowing is not mandatory: few are the plot points that aren’t telegraphed well in advance. Borte is really good at set pieces, though, and a few of them are unexpected and brutal.

Given the script’s shortcomings, it’s up to Crowe to keep the movie from floundering. He does that through his physicality which can be summed up in one word: massive. Yet it gives him an everyman guise that serves the character well. Add the menacing demeanour and gravelly voice, and you start fearing for those who cross his path.

There’s another layer Unhinged doesn’t know what to do with: the angry white man demanding restitution. We see them at restaurants and supermarkets refusing to wear masks, complaining about immigrants and minorities and stomping into public buildings armed to the teeth. With their position near the top of the social pyramid under siege, they’re acting out. Crowe’s entitled, resentful “Man” represents this bunch, but the movie is too focused on cheap thrills to care.