31 Days Of Horror: An American Werewolf In London

“Stay on the road. Keep clear of the moors.”

Writer/director John Landis made many movies throughout his career but he primarily has made comedies. A lot of comedies. In fact he started his career directing a horror comedy called Schlock After finding success with National Lampoon’s Animal House and The Blues Brothers Landis decided to make another horror comedy. 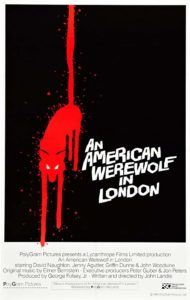 David Kessler (David Noughton) and Jack Goodman (Griffin Dunne) are backpacking across England and find themselves on the moors one dark and spooky night. They find refuge at a local pub called the Slaughtered Lamb. The locals make them uncomfortable and they quickly leave but not before they receive a warning. “Beware the moon, lads.”

They start walking and soon find themselves out on the moors after accidentally leaving the road. They try to find their way back to the pub but find an animal seems to be stalking them. They are attacked by an animal that kills Jack and wounds David. David wakes up in a hospital in London where he is told that they were attacked by a lunatic. David meets a pretty nurse named Alex Price (Jenny Agutter) who takes him in. Meanwhile David starts seeing a decaying Jack who warns him that they were attacked by a werewolf and he needs to kill himself because he’s a werewolf too. David doesn’t believe that Jack is real but soon the full moon is upon him.

The special effects by Rick Baker in this movie are amazing. The transformation scene is brilliant and even now it really hasn’t been beat with all of today’s technology when it comes to transforming a person into an animal. The film has plenty creepy horrifying moments mixed with humour. It’s probably my favourite werewolf movie. I also wrote about this in 31 Days of Horror’s first year