31 Days Of Space: The Spooky Frontier – Invasion Of The Body Snatchers

Dr. Miles J. Bennell (Kevin McCarthy) arrives home in the small town of Santa Mira from a conference to find that he has a ton of patients waiting to see him. When he gets to his office he finds that most of the patients have left but the ones who remain all seem to claim the same thing. A close loved one is suddenly an imposter.

Dr. Bennell runs into ex-girlfriend Becky Driscoll (Dana Wynter) who has just recently returned from abroad. Becky’s cousin has the same concern about Becky’s Uncle. Becky gets Dr. Bennell to take a look and Bennell decides it’s psychological and sends Becky’s cousin to a psychiatrist. Later Dr. Bennell talks to psychiatrist Dr. Dan Kauffman who says there seems to be an outbreak of mass hysteria of people thinking that other people have been replaced. 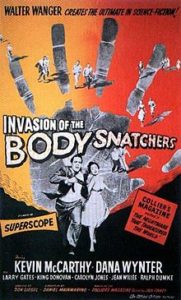 The replacements look like the original person, sound like the original person, have the same memories but they all seem to lack emotion. Dr. Bennell and Becky get a call one night from Bennell’s friends Jack (King Donovan) and Teddy (Carolyn Jones). They’ve found a body in their house that looks, unusual. The body lacks any distinguishing marks, fingerprints, etc. Later when Jack goes to sleep a cut on his hand appears on the body. Teddy notices and wakes Jack up.

Meanwhile Dr. Bennell has taken Becky home and heard some noise in her basement where her father was. When Teddy and Jack run over to Dr. Bennell’s house to tell him about the body starting to take on Jack’s likeness Bennell realizes that Becky is in danger too. They all race over to her house to find a body forming in the basement. They take Becky and run back to Bennell’s house. Becky’s father calls the police who can’t find any bodies.

Later in Dr. Bennell’s greenhouse the foursome find four giant seed pods that have started growing into them. The planet has been invaded and the seeds have started replacing people with emotionless duplicates. The group soon find that there’s no one that they can trust and most of the town has been taken over.

This is a fantastic film. Made in 1956 it’s still pretty creepy today. It’s the sense of mistrust and hopelessness as it becomes tougher and tougher to find someone to trust that make things creepy. The movie was remade in one of the rare good remakes in 1978. It was remade again in 1993 to pretty mediocre results. A classic.