31 Days Of Space: The Spooky Frontier – It Came From Outer Space

An astronomer John Putnam (Richard Carlson), newly moved to the little town of Sand Rock, Arizona is out with romantic interest and teacher Ellen Fields (Barbara Rush) when the couple see a meteorite crash into Earth just nearby.

They travel out to an abandoned mine and John climbs into the crater finding a glittery trail that leads him to a spaceship. A barely seen alien causes a cave in hiding the ship and blocking it from John. When he gets back the town sheriff Matt Warren (Charles Drake) has arrived and doesn’t believe John’s story of aliens. 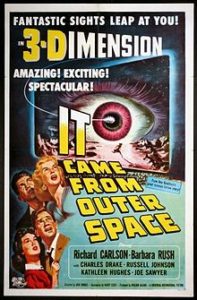 Ellen doesn’t quite believe John but agrees to help him uncover the truth. The sheriff also has a thing for Ellen and wants John to back off. Meanwhile strange things have been happening in town and people have started disappearing. John witnesses one of his friends acting strange with a glassy look in his eye. After a few days the sheriff is starting to believe John but there is something else happening that John is about to stumble across.

Directed by Jack Arnold (Creature from the Black Lagoon) with low key tension, this is an excellent sci-fi thriller based on a story from Ray Bradbury. Originally shot in 3D (as was Arnold’s Creature from the Black Lagoon) the movie wisely holds off showing the aliens until the very end thus keeping the cheese factor to a minimum. The story itself is pretty interesting. Without giving away the plot it’s kind of different than the usual alien stories from that era. You may not be able to see it in 3D but it’s still well worth a watch.